By
Austin Gayle, The Sports Xchange 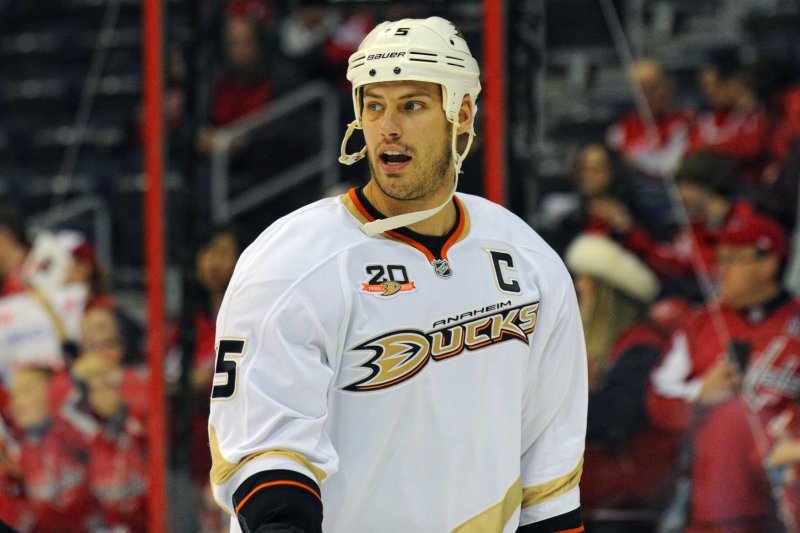 ANAHEIM, Calif. -- With the help of a fortunate bounce, Anaheim center Ryan Getzlaf again captained his team to a victory over the visiting Calgary Flames, scoring the game-winning goal late in the third period to lift the Ducks to a 3-2 victory on Saturday night.

Anaheim took a 2-0 lead in the best-of-seven series, which shifts to Calgary for Games 3 and 4 beginning Monday night.

Flames defenseman Dougie Hamilton first put his team on thin ice with a penalty heading into the final six minutes of play before Getzlaf scored his game-winner on the power play goal with 4:46 left. Getzlaf's shot deflected off Calgary's Lance Bouma and into the net, a result that Flames captain Mark Giordano hopes to move on from.

"I thought we played a good game," Giordano said. "The game was decided by a bounce, to be honest. That's how playoffs are, and you got to wash that away and move on."

Getzlaf was credited with the goal on assists from center Ryan Kesler and right winger Patrick Eaves, improving his goal total to two this postseason. Kesler and Eaves both earned their first assists of the playoffs.

Flames goaltender Brian Elliott was tested early in the first period with two early chances, one coming off his own teammate's stick. Calgary left winger Matthew Tkachuk deflected a centering pass off his stick that fired into Elliott's chest, and the latter chance was a strong wrist shot from Anaheim left winger Nick Ritchie.

That opened the floodgates to a pair of quick goals against Elliott.

Ducks right winger Jakob Silfverberg found the back of the net to open the scoring, sending the puck past Elliott's glove with relative ease just 3:21 into the contest. With the goal, Silfverberg passed Rob Niedermayer for eighth on the all-time franchise scoring list.

Just over three minutes later, Anaheim center Rickard Rakell doubled the lead with his second goal of the series.

Rakell circled around the back of the net to stuff the puck just inside the right post for a 2-0 lead with 13:16 still left to play in the first period. Getzlaf and defenseman Kevin Bieska picked up assists on the score.

The Flames' chances continued to appear bleak when Tkachuk's first-period woes continued, as he put Anaheim on the power play with a high-sticking penalty with just 1:58 left in the first period.

Backlund took advantage of a one-on-one opportunity with Ducks goaltender John Gibson with an easy forehand flip over Gibson's right blocker to narrow the deficit to 2-1. Michael Frolik picked up the assist with his breakout pass for his first point of the postseason.

Riding Backlund's momentum, Calgary stayed hot to start the second period as center Sean Monahan knotted the contest at 2-2 on the power play 7:01 into the second period, tallying his second goal of the postseason. Monahan deflected it by Gibson's blocker with assists from left winger Johnny Gaudreau and defenseman TJ Brodie.

Bieksa fueled the Flames' power play with a slashing penalty 5:15 into the middle period.

Gibson kept the Ducks afloat with two spectacular saves shortly after Monahan's goal. He continued to keep the net clean to help kill the Calgary's second and third power-play opportunities of the middle period.

Getzlaf was called for goalie interference with 4:40 left in the period, and Bieksa later was whistled with 2:42 remaining.

Getzlaf was quick to mention how Anaheim struggled in the second period after the game.

"It was kind of not a good period for us," Getzlaf said. "Obviously, they came out with an attitude in that second period to try and push us and play. They did a great job, got us off our game."

NOTES: The Ducks reassigned LW Ondrej Kase to the San Diego Gulls, Anaheim's primary AHL affiliate, to open up space on the roster for LW Nick Ritchie just hours before Saturday's game. Ritchie made his Stanley Cup playoff debut in Game 2 after completing a two-game suspension for punching Chicago Blackhawks D Michael Rozsival on April 7. ... Ducks D Shea Theodore improved his playoff career point total to three with his assist in the first period of Saturday's affair. All three of his points have been assists. ... Flames RW Troy Brouwer earned his 100th career Stanley Cup playoff appearance against the Ducks on Saturday night.