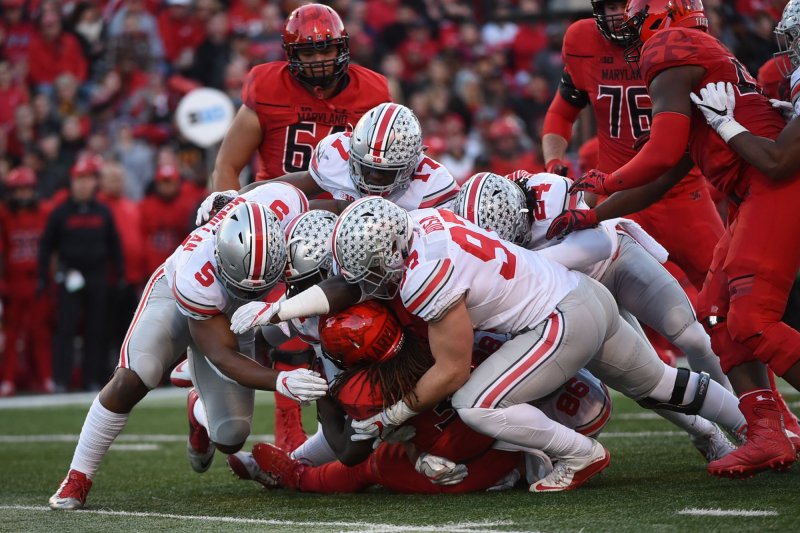 Malik Hooker (24) is projected to be the Jets' top pick in the NFL Draft. File photo by Molly Riley/UPI | License Photo

The New York Jets have seven picks in the NFL Draft, including No. 6 in the first round April 27 in Philadelphia.

After an abysmal 2016 season, it's difficult for Jets fans to have much optimism for the approaching season. While the draft should obviously upgrade the roster, the question is how much different it will make, at least in 2017.

Wide receiver Brandon Marshall is gone, and the offense needs weapons. The depth at tight end in this draft should make that a priority in the early rounds.

Most important is how the decision-makers will deal with the quarterback situation. The last two drafts have produced Bryce Petty (fourth round, 2015) and Christian Hackenberg (second round, 2016). Geno Smith exited this off-season, and added was journeyman Josh McCown, who is with the eighth team of his career and fourth in the last eight seasons.

Here is a look at the Jets' five-year draft record with roster tallies reflecting totals as of the end of the 2016 season. Below that are key personnel moves made this year and the team's current needs heading into this draft and our projection for all their 2017 picks.

1. Offensive line: The Jets probably won't find their much-needed franchise quarterback in this draft, but maybe they can discover one or two guys to protect him. The offensive line is in the midst of a complete overhaul, with only guard James Carpenter remaining from the 2015 season opener. There aren't any can't-miss offensive linemen in the top 10, so don't be surprised if general manager Mike Maccagnan trades down from the No. 6 pick to get his lineman as well as an extra pick.

2. Cornerback/safety: The Jets used to be loaded at cornerback and empty at safety. Now they're in dire need of help at both positions. If Maccagnan stays at No. 6, he should be able to pick from the likes of cornerback Marshon Lattimore. Marlon Humphrey and Chidobe Awuzie or safeties Jamal Adams and Malik Hooker.

3. Tight end: There's de-emphasizing a position, and then there's what the Jets did with the tight end under former offensive coordinator Chan Gailey. Tight ends caught just 26 passes the last two years. A team with as many needs as the Jets probably can't reach for Alabama tight end O.J. Howard early in the first round, but they'll almost surely add a tight end sooner than later.

Below is list of all seven of the Jets picks, with players suggested by NFLDraftScout.com.

Who would you take? Let us know in comments.

Now it's your turn. Check NFLDraftScout.com for a list of the top 1,000 prospects in this draft.