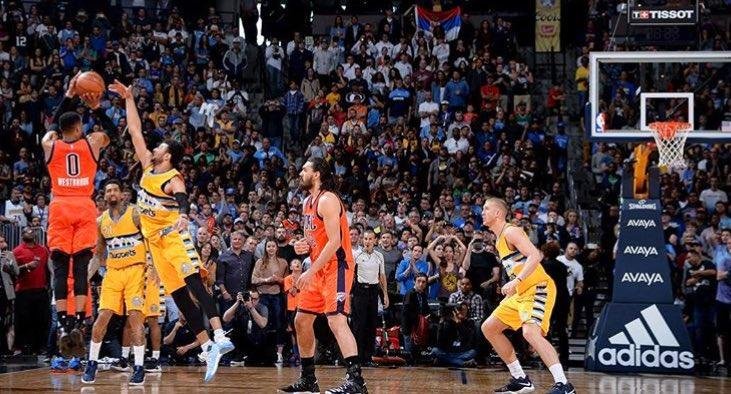 Oklahoma City's Russell Westbrook made history with his 42nd triple-double on Sunday, April 9, 2017. He capped the historic day by hitting the game-winning three-pointer at the buzzer. Photo courtesy Oklahoma City Thunder via Twitter.

DENVER -- Russell Westbrook capped his record-setting 42nd triple-double with a game-winning 3-pointer at the buzzer and the Oklahoma City Thunder beat the Denver Nuggets 106-105 on Sunday.

Westbrook ended his historic day with a 36-foot dagger to finish with 50 points, 16 rebounds and 10 assists to pass Hall of Famer Oscar Robertson for most triple-doubles in an NBA season.

The guard scored the Thunder's last 13 points to eliminate the Nuggets from playoff contention.

Danilo Gallinari had a season-high 34 points and grabbed 10 rebounds, and Nikola Jokic scored 23 points for Denver.

The Nuggets (38-42) needed to win their last three games and hope the Portland Trail Blazers dropped their last two, but instead Denver took a second heartbreaking loss to the Thunder this season.

Oklahoma City rallied from nine down late to beat the Nuggets in overtime on Nov. 25.

Who else? Russell Westbrook drills a 3 at the buzzer and Thunder wins!! #MVP #MVP #MVP pic.twitter.com/hPaNKalFiJ

The Pepsi Center fans came out in anticipation of history and weren't disappointed, although it took longer than expected.

Westbrook got his ninth assist late in the third quarter and was taken out with 2:02 left in the quarter to the crowd's disappointment.

When Westbrook stood up to check in with 9:01 left, the fans started cheering. Each time he brought the ball up the court anticipation grew. After three close misses off his passes, he found Semaj Christon in the corner for a 3-pointer with 4:17 left.

The fans erupted in cheers and Westbrook raised a hand when the public address announcer acknowledged the feat.

Westbrook had 23 points, 12 rebounds and six assists at halftime and was hearing chants of "MVP! MVP!" whenever he shot free throws.

Gallinari scored 22 points in the third quarter to give Denver a 14-point lead heading into the fourth, but the Thunder (46-34) rallied to get within two on Westbrook's layup with 27.1 seconds left.

After Jokic missed, Westbrook grabbed the rebound and the Thunder called timeout with 2.9 seconds left. Kyle Singer inbounded to Steven Adams, who handed off to Westbrook for the winning shot.

NOTES: F Wilson Chandler had 17 points and 10 rebounds for Denver. ... Thunder F Doug McDermott was a late scratch due to left knee soreness. ... Nuggets F Kenneth Faried has now missed 13 games this season with lower back issues. He missed nine games in February and March and three in January. ... Thunder F Andre Roberson was back after resting his left knee Friday. G Alex Abrines missed his third consecutive game because of a left knee sprain. 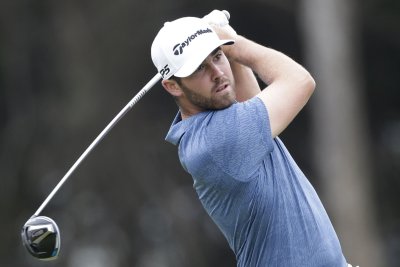