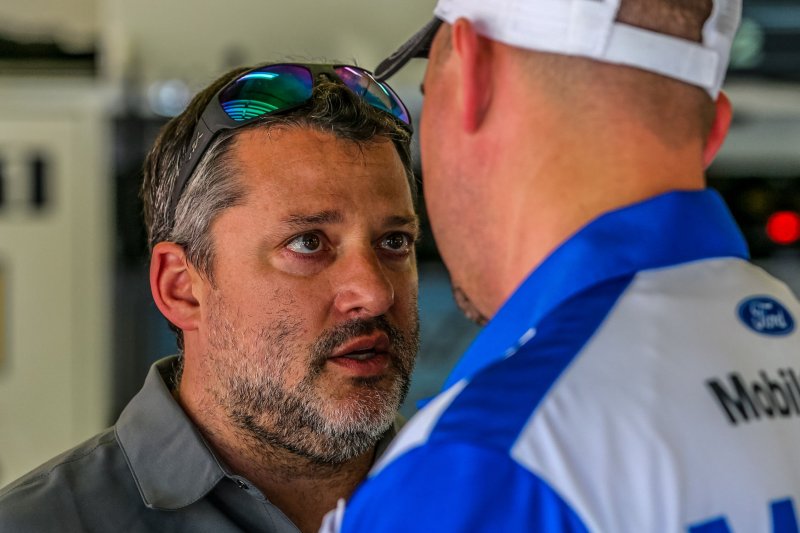 Just because Tony Stewart has retired from Monster Energy NASCAR Cup Series racing doesn't mean the co-owner of Stewart-Hass racing has lost his quick wit and sense of humor.

Stewart's penchant for repartee was in full evidence on Saturday morning when he answered questions from reporters during a Ford Performance press conference at Daytona International Speedway.

Before Stewart could get into his shtick, however, he had to take some good-natured ribbing from fellow Ford owners Roger Penske and Jack Roush.

Penske, known for his white button-down shirts, chided Stewart about the black shirt Smoke was wearing.

Roush recalled an instance where Stewart inadvertently wrecked one of his drivers, Carl Edwards, during a race at Pocono-when Stewart was trying to wreck Clint Bowyer.

"Is that the only time I did anything?" Stewart interjected after Roush offered his forgiveness. "If that's it, I'm good with that. I appreciate it."

Notoriously late to most structured obligations, Stewart compared the relaxing life of a car owner to the harried life of a driver.

"Really, the only drama I've had so far is Roger picking at me on the color of shirt I wear, and I guess Jack has kind of given me the pardon already, so it's been a pretty good weekend so far. If all I've got to worry about is my shirt color, I've got it made right now."

Asked about the timeline for Stewart-Haas Racing's negotiations with Ford, Stewart took a playful shot at Ford executive Raj Nair.

"I can't remember the date, but Raj was sitting out front begging at the front door," Stewart quipped.

The No. 88 team changed from a qualifying engine to the race engine after practice on Friday, a practice customary at the Daytona 500. But Earnhardt found his car less responsive with the new engine; in addition, the car developed a slight vibration that led to the team changing drive shafts in the car.

"We changed the motor and went to the race engine today, took the qualifying motor out last night," Earnhardt explained. "I thought our car was a little better yesterday in practice. In the pack, it would develop runs a little bit better. It just seemed like I had to get a little luckier today with what was happening behind me, where yesterday the car would do some things or develop some things kind of on its own.

"The thing about that is every time you get out there -- you might not even change anything -- it just depends on what kind of pack you get in, what kind of cars are around you, and your car's performance can change and kind of fool you a little bit. I'm just hoping that today was a little more laid back, not quite as many cars out there, not quite as active in the draft, and maybe that's why we didn't see our car respond like it did yesterday."

The vibration was of particular concern.

"You worry about that, because any kind of thing that is out of balance is going to hurt that straight-line speed," Earnhardt said. "We tried to work on that and were able to fix it right there on that last run. It's just simple stuff like flipping drive shafts and things like that.

"You want to get all that out of there so you don't have any doubts about anything holding your car back. Otherwise, it's been really uneventful. We haven't had any issues or problems with the car mechanically, and nothing happened on the race track, so it looks like we are going to get this thing on the grid tomorrow and ready to go."