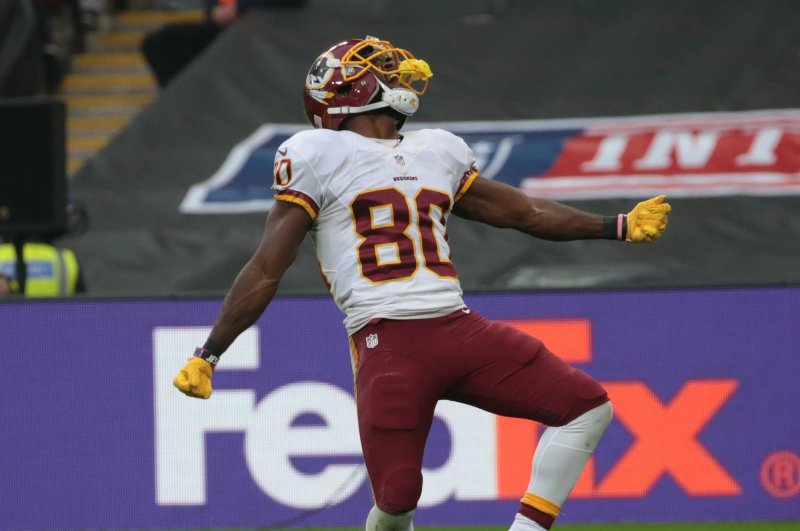 Minnesota, behind six Sam Bradford to Stefon Diggs completions, drove to the Washington 21-yard line in the final minute before losing the ball on downs after Bradford was sacked on fourth-and-17.

Kirk Cousins passed for 262 yards and two touchdowns without an interception for the Redskins (5-3-1) and Robert Kelley rushed for 97 yards.

Diggs, a Maryland native, caught 13 passes for 164 yards for Minnesota (5-4), which has lost four straight.

Bradford completed 31 of 39 passes for 307 yards with two touchdowns and an interception.

After the Redskins took a 23-20 lead on Hopkins' 50-yard field goal with 9:33 left to play, Minnesota was driving, but on second down from the Washington 39, Bradford's pass was intercepted by linebacker Preston Smith and returned to the Minnesota 42.

The Redskins hade tied it at 20 with two Hopkins field goals in the third quarter.

Cousins led Washington 68 yards in 10 plays on its opening drive and finished with a 4-yard touchdown pass to Jamison Crowder. It was Crowder's fifth touchdown of the season and 100th career catch.

The Redskins made it 14-0 on the second play of the second quarter. After a play fake, Cousins had two tight ends -- Jordan Reed and Vernon Davis -- open deep and he threw long to Davis for a 38-yard score.

Bradford, with a big assist from Diggs, got the Vikings' offense moving. After Washington's first punt, Bradford hit Diggs for 36 yards. A 13-yard pass to Rudolph put it at the 1-yard line and Matt Asiata later scored.

A 23-yard Diggs reception on the next drive helped set up Bradford's 20-yard touchdown pass to Rudolph with 58 seconds left in the half, tying the score.

On Washington's next play from scrimmage, Chris Thompson fumbled and Everson Griffin recovered at the Redskins' 33. A 28-yard pass to Diggs got Minnesota inside the 5 and Bradford connected with Adam Thielen for a 3-yard touchdown as time ran out, but Walsh missed the extra point try.