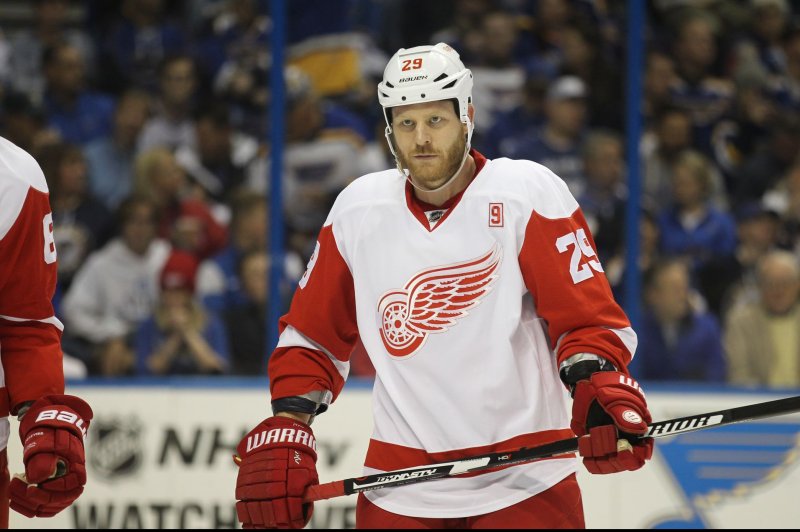 Detroit Red Wings' Steve Ott waits for the face off against the St. Louis Blues in the first period at the Scottrade Center in St. Louis on October 27, 2016. Photo by Bill Greenblatt/UPI | License Photo

St. Louis Blues' Vladimir Tarasenko of Russia looks for someone to pass the puck to as he is pressured by the Detroit Red Wings defense in the first period at the Scottrade Center in St. Louis on October 27, 2016. Photo by Bill Greenblatt/UPI | License Photo

Former St. Louis Blues Barrett Jackman waves to the crowd as he is introduced before the Detroit Red Wings - St. Louis Blues hockey game at the Scottrade Center in St. Louis on October 27, 2016. Jackman has retired from the game after 13 years in the NHL, 12 of those with St. Louis. Photo by Bill Greenblatt/UPI | License Photo

ST. LOUIS -- It took until the eighth round of a shootout for the Detroit Red Wings to extend their winning streak to six games.

Center Henrik Zetterberg made the winning shot for the Red Wings, giving them a 2-1 victory after goalie Petr Mrazek stopped the last seven shootout attempts by the St. Louis Blues on Thursday night.

The Red Wings are unbeaten since losing their first two games of the season. They also have now won on each of their past five visits to St. Louis, the last three coming either in overtime or a shootout.

Zetterberg did not speak to the media after the game, but one of his teammates, center Frans Nielsen, said the win was just another example of how Detroit is finding different ways to extend the current streak.

"It's crazy how much talent there is on this team," Nielsen said. "We've won six in a row, (but) I think especially some of those games ... I think the goalie stole the game for us. I don't think we've been perfect, but we found ways and it's been nice to play well. The goalies have stepped up, but we're still working and there's still a lot of place for improvement."

In the shootout, Blues right winger Alexander Steen scored in the first round and Red Wings left winger Gustav Nyquist scored in the third round, the only other goal before Zetterberg's game-winner.

"My job is to stop the puck, that's the way shootouts go sometimes," said Blues goalie Jake Allen, who was credited with 26 saves on the night. "Sometimes you are 3-for-3 and sometimes 0-for-10. You're not going to win them all, but it's a tough way to go down."

The opposing goalie, Mrazek, was responsible for giving the Red Wings a chance to win the game, stopping 31 of 32 St. Louis shots in regulation and overtime. He was perfect in the scoreless first period, when the Blues outshot the Red Wings 14-4.

"We've had real good goaltending all year, and it's a big part of having success in this league," Detroit coach Jeff Blashill said. "I was glad with the fact we stayed with it and found a way to grind it out."

The only goal Mrazek allowed actually went in off the skate of one of his teammates, Nielsen, who deflected the shot by defenseman Kevin Shattenkirk into his own net early in the second period.

Nielsen atoned for that mistake later in the period, however, when he was able to skate around Shattenkirk and score a short-handed goal, getting the puck past Allen.

"I think Jake felt like he had to honor the backdoor pass, but it was a great move by him to look like he was going behind the net and stuff it," Shattenkirk said. "If I could read that a little better and have my speed better, hopefully I can get a stick on it."

The loss continued a recent trend that has seen the Blues struggle offensively. St. Louis (4-2-2) has scored only one goal in four of its past five games, and both of its goals in two losses at home this week came from Shattenkirk.

"We're scoring one goal and getting points, that's incredible," Blues coach Ken Hitchcock said. "That's a hell of a feather in these guys' cap, to score one goal and get points. You're going to have to score more goals and have to finish your chances. I don't think we're creating the second and third chances that we normally do. The scoring chances seem to be one and done right now."

NOTES: The Blues activated Jori Lehtera from injured reserve and said he would play left wing instead of center. Lehtera missed four games because of a concussion. ... To make room on the roster, LW Magnus Paajarvi was placed on waivers. ... LW Justin Abdelkader returned to the Red Wings' lineup after missing two games because of a lower-body injury. ... LW Scottie Upshall and D Carl Gunnarsson were healthy scratches for the Blues. ... RW Thomas Vanek was scratched by Detroit. He was tied for the team lead with four goals and led the Red Wings with eight points through the first seven games. He is day-to-day with a mid-body injury. ... Red Wings RW Steve Ott played in the 800th game of his career. ... The Blues will host the Los Angeles Kings on Saturday. The Red Wings return home to play the Boston Bruins on Saturday.