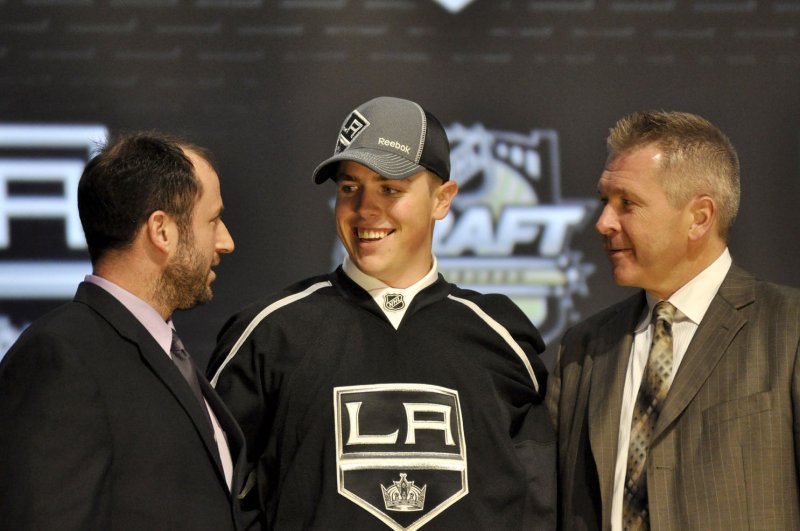 LOS ANGELES -- Los Angeles third-string goaltender Peter Budaj made a point to get the puck from the Kings' 4-3 shootout victory Saturday.

It's not because it was the first win in the first game in which he was thrust into the spotlight as the Kings' new starting goaltender after groin injuries to Jonathan Quick and Jeff Zatkoff. It was because it was his 300th game in the NHL, and for that, he wanted to celebrate.

It's been a long ride. Last year, he came to the Kings on a tryout. And Saturday, he was the goaltender in net for the Kings second victory of the season.

Tanner Pearson scored in the shootout after recording a goal in regulation to help the Kings salvage a game in which they enjoyed a 3-0 lead.

Vancouver rallied to tie it on defenseman Alexander Edler's power-play goal with 35 seconds left. The Kings' Brayden McNabb was in the penalty box after shooting the puck over the glass.

Budaj made 22 saves. He gave up three consecutive goals, but stayed strong in net in the shootout. The 34-year-old goaltender is happy to have the opportunity to play.

"It's a great organization. Great team. Great guys. Very happy to be here. I'm trying to enjoy it and play the best I can."

The Canucks trailed by three goals in the second period, but but salvaged a point. It was the first loss of the season for Vancouver, which opened the season with four consecutive wins at home.

"We sure didn't deserve a point after the first two periods," Canucks coach Willie Desjardins said. "... I'm pleased to get a point. That's a tough team. They're a hard team to play against. We battled hard. We didn't create a lot (of chances) the first two (periods), but our guys stayed with it. We capitalized on the power play late when we needed to. It's better to get one point than nothing."

Budaj lost his mask late in the third period when teammate Drew Doughty was tangled up with a Canucks player and Doughty's stick knocked off the mask of Budaj. It gave Kings fans a moment of pause, especially after losing two goaltenders in October, but he was OK.

Budaj turned away all three Canucks attempts in the shootout.

"It's kind of just a battle ... you don't want to move too early," Budaj said. "You want to out-wait them and wait for them to do the move. I was able to do that. Second one I got lucky and lost the puck, but I was glad to see the other two. Big win for us. We needed the points."

The Kings are down to Budaj after losing former Conn Smythe Trophy winner Quick to a groin injury in the season opener against San Jose. He's out for at least three months. Backup goaltender Zatkoff was helped off the ice with a groin injury during Saturday morning's skate.

"He was strong, and he did the same thing when he was with us last year too," Pearson said of Budaj. "He's definitely doing his part, and we just have to keep doing ours to help him out."

The Kings scored early in the first period as Brayden McNabb beat Canucks goalie Jacob Markstrom glove side from the faceoff circle at 4:35. The Canucks couldn't clear the puck from their own zone, and the Kings converted.

Pearson scored a power-play goal at 18:24 to give the Kings a 2-0 lead in the first period. Alec Martinez's shot was stopped by Markstrom, but he couldn't corral the puck and Pearson was there to poke in the rebound.

Dustin Brown scored 33 seconds into the second period -- the Kings' first short-hand goal of the season -- off a rebound to make it 3-0.

Brown's goal was reviewed as the puck was kicked by Anze Kopitar's skate, but Brown got a stick on the puck before it crossed the goal line.

The Canucks didn't get on the board until 8:40 of the second period, when Markus Granlund got behind the Kings' defense and beat Budaj.

Henrik Sedin converted on a power play, scoring off a rebound at 14:51 to pull the Canucks within 3-2.

The Canucks are expected to start Ryan Miller in goal Sunday when they play the second game of a back-to-back at Anaheim for the Ducks' home opener.

NOTES: Budaj played his 300th game, becoming the second Slovakian-born goaltender to reach the milestone (Jaroslav Halak). ... The Canucks played their first road game of the season. ... The Canucks started the season 4-0-0 for only the second time in franchise history. ... Kings G Jack Campbell was recalled from the Ontario Reign of the American Hockey League on an emergency basis to be the backup Saturday. ... Canucks RW Jake Virtanen was a healthy scratch in the fourth game, but was back in the lineup Saturday. ... Canucks scratches were RW Jack Skille, D Alex Biega, D Nikita Tryamkin. ... Kings scratches were D Matt Greene, RW Teddy Purcell, C Jordan Nolan. ... Kings C Jeff Carter played in his 800th NHL game and 300th as a King on Saturday ... Canucks RW Derek Dorsett left the game with a shoulder injury.