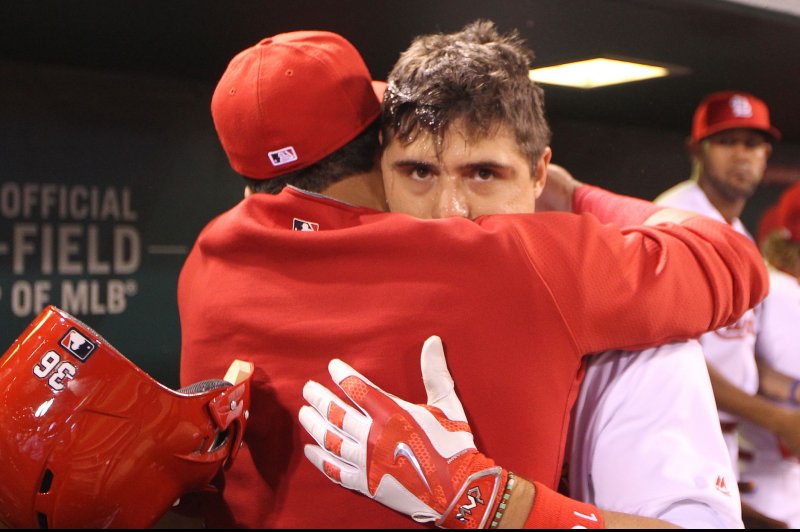 St. Louis Cardinals' Aledmys Diaz is hugged by Carlos Martinez after hitting a grand slam home run in the fourth inning against the Cincinnati Reds at Busch Stadium in St. Louis on September 27, 2016. Photo by Bill Greenblatt/UPI | License Photo

St. Louis Cardinals Brayan Pena and Aledmys Diaz tape a Jose Fernandez jersey to the back of the dugout before a game against the Cincinnati Reds at Busch Stadium in St. Louis on September 27, 2016. Miami Marlins Jose Fernandez died in a boating accident on September 25, 2016. Photo by Bill Greenblatt/UPI | License Photo

St. Louis Cardinals Matt Carpenter celebrates his solo home run with teammates in the dugout against the Cincinnati Reds in the third inning at Busch Stadium in St. Louis on September 27, 2016. Photo by Bill Greenblatt/UPI | License Photo

In his first game since his close friend, the Miami Marlins' ace pitcher, died Sunday morning in a boating accident, Diaz belted a grand slam to give the St. Louis Cardinals the lead for good in a 12-5 rout of the Cincinnati Reds on Tuesday night at Busch Stadium.

Diaz's 408-foot clout on a 2-1 pitch from Robert Stephenson in the bottom of the fourth inning set off fireworks above the scoreboard and a few tear ducts inside the ballpark, including Diaz's. He accepted hugs from teammates and took a curtain call from the crowd of 34,286.

It was the big hit in a long-ball barrage for St. Louis (82-75), which cracked five homers, including a pair in the sixth. Matt Adams lined his 16th homer to center as a pinch hitter, and Randal Grichuk hit his 24th homer two batters later.

The Cardinals stayed within 1 1/2 games of the New York Mets for the National League's first wild-card spot and moved within a half-game of San Francisco for the second wild-card slot, pending the outcome of the Giants' game against the Colorado Rockies.

Scott Schebler homered for Cincinnati (66-91), while Joey Votto went 3-for-5 with two RBIs.

Picking up where they left off from their 15-2 thrashing of the Cardinals on Monday, Cincinnati initiated the scoring in its half of the first inning. Votto laced a double to the wall in left-center on a 3-2 pitch, easily plating Eugenio Suarez.

The Reds made it 2-0 in the third when Brandon Phillips' bases-loaded sacrifice fly scored Suarez, but Cincinnati failed to tally again after reloading the bases.

St. Louis got on the board in its half of the third on Matt Carpenter's 20th homer, giving the Cardinals five players with 20 home runs this year.

An inning later, the Cardinals grabbed a 5-2 lead with one swing from Diaz, a grand slam to the seats in left-center. It was his 17th homer of the year and the first slam of his career.

Cincinnati cut its deficit to 5-3 in the fifth when Votto launched his 28th homer, a 417-foot bolt to right. However, Jhonny Peralta whacked a three-run shot to center, his eighth of the year, for an 8-3 advantage in the bottom of the fifth.

NOTES: St. Louis LF Matt Holliday (right thumb fracture) appears doubtful to return this year. Swelling hasn't abated in the thumb, preventing Holliday from taking a live batting practice session to test it out. ... ON Monday, Cincinnati RF Steve Selsky produced the franchise's first five-hit game for a rookie since Wade Rowdon had one on July 9, 1986, against the New York Mets. ... Cardinals 1B Matt Carpenter (hand) returned to the lineup Tuesday in his normal leadoff role, and SS Aledmys Diaz was back in the lineup, hitting seventh. Diaz missed the previous two games after going to Miami to be with the family of Marlins RHP Jose Fernandez, who died Sunday.