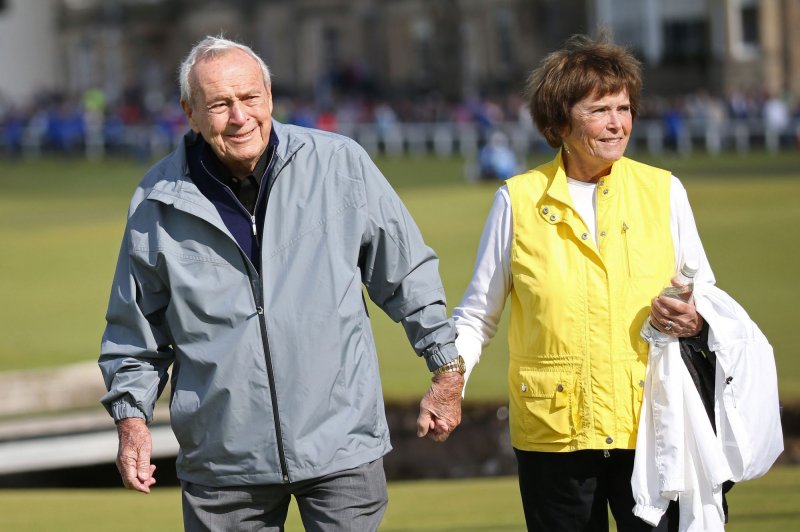 Arnold Palmer (L) seen with his wife Kathleen Gawthrop in this July 15, 2015 file photo from the the144th Open Championship at St.Andrews, died today, September 25, 2016, at 87 according to a USGA statement. The seven-time major winner was known as the king of golf and given credit for bringing the sport to the masses. File Photo by Hugo Philpott/UPI | License Photo

Arnold Palmer, seen in this April 9, 2015 file photo hitting the honorary tee shot to start the 2015 Masters, died today, September 25, 2016, at the age of 87. The seven-time major winner was known as the king of golf and given credit for bringing the sport to the masses. File photo by Kevin Dietsch/UPI | License Photo

Arnold Palmer, seen in this April 9, 2015 file photo hitting the honorary tee shot to start the 2015 Masters, died today, September 25, 2016, at the age of 87. The seven-time major winner was known as the king of golf and given credit for bringing the sport to the masses. File photo by Kevin Dietsch/UPI | License Photo

Golf superstar Arnold Palmer died Sunday at age 87 after helping bring the sport to the masses during a lengthy career. The Sports Xchange takes a look at what people are Just Sayin' about golf's King:

"... (We) just lost one of the incredible people in the game of golf and in all of sports. ... I wish I had another chance to talk to him, but I am so glad we talked a couple weeks ago on his birthday (Sept. 10), when he sounded great. So Barbara and I are just in shock and incredibly saddened. Our hearts, thoughts, prayers and sympathies go out to Kit, his kids, grandkids, great grandkids, and his entire loving family. He was one of my best friends, closest friends, and he was for a long, long time. I will miss him greatly."

"Thanks Arnold for your friendship, counsel and a lot of laughs. Your philanthropy and humility are part of your legend. It's hard to imagine golf without you or anyone more important to the game than the King."

PGA Tour commissioner Tim Finchem, in a statement released to the media

"It has been said many times over in so many ways, but beyond his immense talent, Arnold transcended our sport with an extraordinarily appealing personality and genuineness that connected with millions, truly making him a champion of the people. The fact that his popularity never waned more than a quarter century after his last competitive victory speaks volumes to the man, the icon and the legendary figure he was."

"Here's to The King who was as extraordinary on the links as he was generous to others. Thanks for the memories, Arnold."

"I'm heart broken tonight. Arnold Palmer defined what it is be a professional inside and outside the ropes. All of golf says 'thanks Arnold'"

"RIP #arnoldpalmer. You changed the game with your charisma and personality. Every player, me included, should thank you for what you brought to our great game. You had this incredible ability to open the eyes of the world to the beauty of golf. You played with Presidents, celebrities and CEO's. In doing so you opened the game to commercialization. For that I thank you. Our sport will always remember you. I will miss you."

"Legends never die. ... You will live on forever Arnie. ... I will never forget the bear hug in front of the clubhouse at Augusta, to watching you hit your final tee shot there, and to spending time with you in the locker room at Bay Hill. ... Thank you for being you and giving me the opportunity to do what I do everyday. I love you as did everyone! RIP The King!!"

"Very sad news to hear of the passing of the great Arnold Palmer. We will miss you very much. The King and Legend. RIP"

"We mourn the loss of golf legend and Latrobe, PA native Arnold Palmer. Our thoughts and prayers are with his family."

"Rest in Peace to the legend Arnold Palmer. May God bless his family and friends."

President George W. Bush, in a statement released to the media

"For all those who love the game of golf and love to see it played, there has never been a sight quite like Arnold Palmer walking down the fairway toward the 18th green. The announcer Vin Scully once said, 'In a sport that was high society, Arnold Palmer made it High Noon.' Laura and I are saddened by Arnie's death and send our sincere condolences to his family, friends, and fellow fans. He was a great American whose friendship -- and swing thoughts -- will be missed."

"My heart aches with passing of the King...Mr. Arnold Palmer. What he did for golf cannot be measured. Athlete, pioneer, philanthropist, family man, and much more...RIP Arnie."

"RIP Arnold Palmer. U r the reason I love golf!"

In Gee Chun posted a picture on Twitter of a letter Palmer sent her last week, congratulating her on winning the Evian Championship.

"So sad.. @arnoldpalmer sent me another letter, and then he left. U'll stay with us forever. Please, please, please rest in peace. @LPGA"

"Another legend lost. Sad to hear of the passing of Arnold Palmer. One of the absolute greats! Thoughts and prayers with his family."

Billy Payne, chairman of Augusta National Golf Club and the Masters, in a statement released to the media

"Arnold's bold and daring approach to the game, combined with his citizenship, warmth, humor, humility and grace, were truly the signature of the man that we came to know, and will fondly remember, as The King. His presence at Augusta National will be sorely missed, but his impact on the Masters remains immeasurable -- and it will never wane."

"What an awful day for the sports world. Losing a sure fire superstar in Jose Fernandez...now...The King, Arnold Palmer? Day I won't forget."

"Such sad news to hear about passing of #arnoldpalmer. Great memories of him. His legacy in the game & charity will live forever."

"I'm one of the fortunate folks to have spent time with the King. Incredibly blessed to have known him."

"Today I lost a good friend and the world lost a legend. RIP Arnold Palmer!!!

"We've lost "The King" and "The Greatest" in the same year. How lucky we are to have had them both. RIP Arnie and Ali."