Miami Marlins fan Makayla Gonzalez, 8, with her father Andrew and brother Matto, 6, sign messages on a shirt at a memorial for pitcher Jose Fernanedez, who was found dead Sunday morning following a boating acident, at Marlins Park in Miami. The game between the Marlins and the Atlanta Braves was cancelled after Fernanedez's death. Photo by Gary I Rothstein/UPI | License Photo

The Miami Marlins scoreboard displays pitcher Jose Fernanedez name and uniform number at Marlins Park in Miami, Florida, on Sunday. The game between the Marlins and the Atlanta Braves was canceled after Fernanedez died in a boating accident in Miami. Photo by Gary I Rothstein/UPI | License Photo

Miami Marlins fans placing flowers, photos and sign messages at a memorial for pitcher Jose Fernanedez outside of Marlins Park in Miami, Florida, on Sunday. The game between the Marlins and the Atlanta Braves was cancelled after Fernanedez died in a boating accident in Miami. Photo by Gary I Rothstein/UPI | License Photo

The Baltimore Orioles pay tribute to Florida Marlins pitcher Jose Fernandez, who was found dead early Sunday morning after a boating accident that killed two other people, prior to the Orioles' game against the Arizona Diamondbacks at Orioles Park at Camden Yards in Baltimore, Maryland on September 25, 2016. Photo by Kevin Dietsch/UPI | License Photo

Meghan Dean, commander of U.S. Coast Guard Miami sector, said when her crew found the vessel, two people were underneath it and one person was in the water. Photo courtresy Miami-Dade Fire Rescue Department

Miami Marlins fans pay their respects at a makeshift memorial for pitcher Jose Fernandez outside of Marlins Park in Miami, Florida, September 25, 2016. Fernanedez was found dead this morning following a boating acident. The game between the Marlins and the Atlanta Braves was cancelled following the news of Fernanedez's death. Photo by Gary I Rothstein/UPI | License Photo

Miami Marlins fans pay their respects at a makeshift memorial for pitcher Jose Fernandez outside of Marlins Park in Miami, Florida, September 25, 2016. Fernanedez was found dead this morning following a boating acident. The game between the Marlins and the Atlanta Braves was cancelled following the news of Fernanedez's death. Photo by Gary I Rothstein/UPI | License Photo

MIAMI, Sept. 25 (UPI) -- Miami Marlins ace pitcher Jose Fernandez, 24, was killed early Sunday in a boating accident along with two close friends whose names have not yet been released.

Officials say the 32-foot center console boat was coming into Miami Harbor in the darkness when it slammed into a jetty and overturned. The boat belonged to someone with close connection to several Marlins players, Miami-Dade County Sheriff Lt. L.J. Reyes said during a news conference.

Reyes said there is no evidence of alcohol or drugs being a factor in the crash.

"The Miami Marlins organization is devastated by the tragic loss of Jose Fernandez," the organization said. "Our thoughts and prayers are with his family at this very difficult time. "

The team canceled Sunday's game against the Atlanta Braves.

"Sadly, the brightest lights are often the ones that extinguish the fastest," Marlins owner Jeffrey Loria said in a statement. "Jose left us far too soon, but his memory will endure in all of us. At this difficult time, our prayers are with his mother, grandmother, family and friends."

At news conference, every player and coach on the team, plus other team personnel, were on hand.

"As you see around you, there are no words to describe how this organization feels," Marlins President David Samson said at a news conference. "There's no playbook. There's no words of consolation. ... You realize how precious life is, how taking things for granted is a foolish man's game."

The video board in center field and electronic signage outside the stadium went all black with orange lettering of Fernandez's name and number. Grounds crew stenciled "16" in white on the pitcher's mound.

The Miami Dolphins held a moment of silence to honor Fernandez at their home opener Sunday afternoon, as did teams across Major League Baseball.

Eduardo Perez, a former major leaguer who does color commentary for Marlins games on Fox Sports Florida and also is an ESPN analyst said on ESPN,: "All he wanted to do was have fun and be on that mound and play the game – not work the game, but play the game. And he played it beautifully."

Outside Marlins Park, a shrine of flowers and pictures of Fernandez quickly surfaced. Many fans snapped up Fernandez T-shirts and jerseys at the team shop.

Meghan Dean, commander of U.S. Coast Guard Miami sector, said when her crew found the vessel, two people were underneath it and one person was in the water.

"The navigation lights were still on. We immediately issued an urgent marine information broadcast and contacted the Miami-Dade Sheriff's Office," she said.

Reyes said eight divers entered the water to look for possible survivors. None of the three people who were aboard the boat were wearing life vests.

"It appears they were coming at full speed when they encountered the jetty," Reyes said. "There was not much evidence on the vessel. Right now, the bodies are at the medical examiners' office" and will have autopsies performed on them.

He said the other two victims also were in their 20s, between 21 and 27 years old.

Fernandez, a star right-handed pitcher, was initially scheduled to start in the Sunday game, but the start was pushed to Monday so Adam Conley, returning from the disabled list, could start.

Fernandez defected from Cuba at an early age. It took him four trips to reach the shores of Mexico to eventually fly to Miami. Fernandez settled in the Tampa, Fla., area where he played baseball at Alonso High School. He was drafted as the Marlin's first-round pick in 2011.

On his final journey to Mexico to leave Cuba, Fernandez and a boat load of others defectors hit rough seas that tossed his mother into the ocean, the Tampa Bay Times reported.

When he saw someone fall overboard, he didn't know who it was but was determined to save his fellow passenger. When he got close, he saw it was his mother, who could not swim. She grabbed his neck and he swam 30 yards back to the boat. He was 15 at the time.

"I thought I was going to die many times," he said.

His fastball was clocked at 94 mph in that game. It got even faster after he joined the Marlins.

"We are devastated by the news that Jose Fernandez has tragically passed," Clark said. "Jose was a remarkable young man and a tremendously gifted athlete, who at just 24, established himself as one of the game's biggest and brightest stars. Our thoughts and prayers go out to Jose's family, friends, teammates, Miami Marlins organization and legions of fans in the United States and Latin America."

Florida Gov. Rick Scott sent his condolences to the Fernandez family via Twitter. "I had the opportunity to meet Jose Fernandez in 2014," he said under a photo of the star pitcher with the governor and his wife. "Our prayers are with his family and the Miami Marlins."

Fernández announced that his girlfriend, Carla Mendoza, was pregnant with their first child on Tuesday. 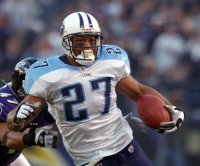 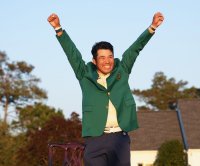 Sports News // 1 day ago
Masters golf: Matsuyama takes 4-stroke lead into final round
April 10 (UPI) -- Hideki Matsuyama went from sixth place to the outright leader of the 2021 Masters tournament with a 7-under par 65 in the third round Saturday at Augusta National Golf Club in Augusta, Ga.