Carson Wentz to start in Week 1 vs. Cleveland Browns 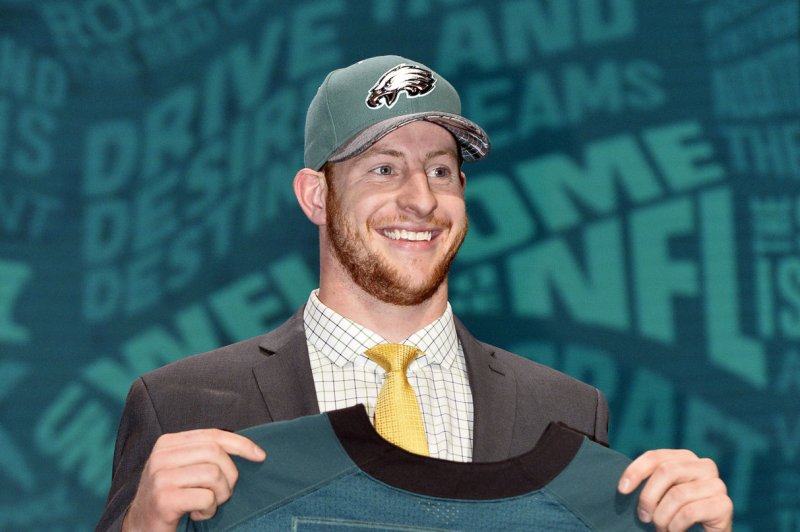 North Dakota State quarterback Carson Wentz holds his jersey after being selected by the Philadelphia Eagles with the second overall pick in the 2016 NFL Draft on April 28, 2016 in Chicago. Photo by Brian Kersey/UPI | License Photo

Wentz, the No. 2 overall pick, will get the start over veteran quarterback Chase Daniel on Sunday after the Eagles traded Sam Bradford to the Minnesota Vikings on Saturday.

"This is what I believe in," Pederson said. "This is what this organization believes in. ... I'm very comfortable with our football team and Carson being our starter.

"Everybody feels like this kid is ready to go and we drafted him to take on the reins and it's something now we are prepared to do."

Pederson broke the news to the team on Monday morning.

"Guys were excited. Guys were excited for Carson," Pederson said. "When you lose your quarterback with Sam, it can be mixed emotions, but guys were 100 percent behind Carson."

Daniel, a former Kansas City Chiefs quarterback, was signed by the Eagles to a deal worth $7 million annually this offseason. He has played in 55 NFL games, completing 50 of 77 career attempts for 464 yards, one touchdown and one interception in six-plus years.

Wentz, who made just 21 starts at North Dakota State, was considered a project when the Eagles drafted him.

"This guy is a proven winner, and he's proven it all the way up through college, and I fully expect him to do it at this level," Pederson said.

"I want to exude that confidence in him. I don't want him looking over his shoulder at all."