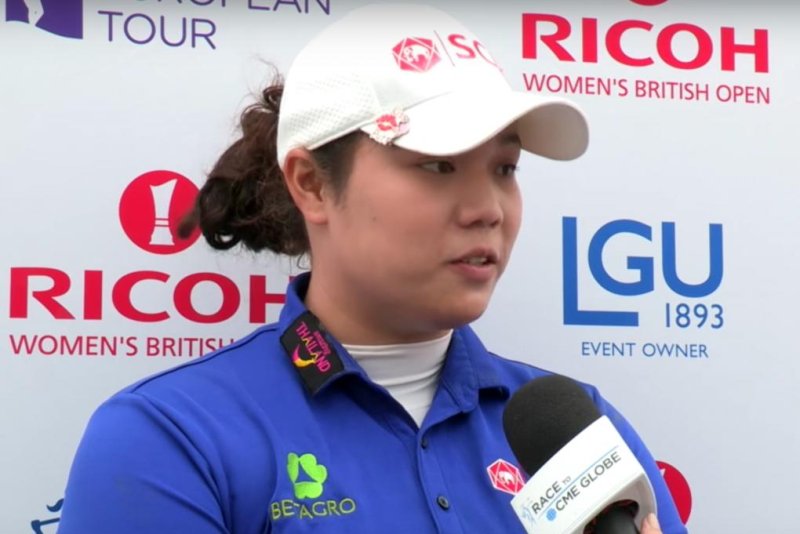 Ariya Jutanugarn claimed the first major championship of her career on Sunday when she won the Ricoh Women's British Open at Woburn, England.

The 20-year-old from Thailand shot even-par 72 in the final round and finished at 16-under 272 on the Marquess Course. She won by three strokes over South Korea's Mirim Lee and American Mo Martin.

Jutanugarn also became the first golfer from Thailand -- male or female -- to win a major title.

"I think it's really important for me and for Thai golf, also," Jutanugarn said afterward. "Like my goal, I really want to win a major and I did. I'm really proud of my achievement because I accomplished my goal this year."

Jutanugarn was cruising toward the victory with a six-shot lead midway through the final round before Lee made a charge. She picked up five strokes in a four-hole stretch as she sank three birdies while Jutanugarn had a double bogey on 13.

Jutanugarn held a one-stroke lead entering the par-3, 17th hole and then gave herself a cushion by making a key 20-foot birdie putt en route to winning her fourth tournament of the season.

Lee, who shot an opening-round 62 to match the tournament record, bogeyed 18 and finished with a final-round 73.

"I really had fun," Lee said afterward. "That was the most important thing. I had fun throughout the whole thing."