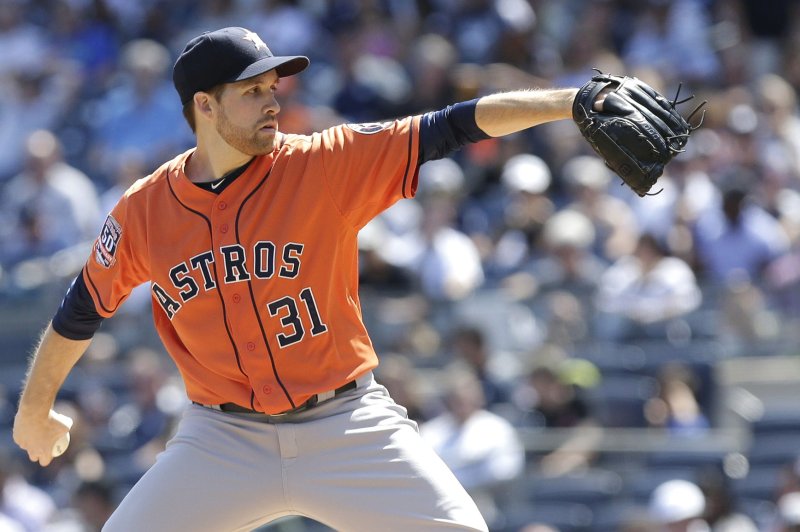 While McHugh produced his seventh consecutive run-suppressing start, Gattis clubbed a pair of home runs as the Houston Astros earned a series victory by beating the Los Angeles Angels 7-2 at Minute Maid Park.

The Astros (53-44) notched their 10th consecutive victory over the Angels behind McHugh (7-6) and Gattis, who socked his 14th and 15th homers. It was Gattis' sixth career multi-homer game and third with the Astros. Gattis has exceled at backstop, batting .310 with nine homers and 21 RBIs in 22 games as the catcher compared to his .175 average, six home runs and 19 RBIs over 46 games as the designated hitter.

Shortstop Carlos Correa added his 15th homer in the fifth as Houston set the table for a third consecutive series sweep of the Angels (43-54) on Sunday. Los Angeles won only the first of 11 meetings this season.

McHugh allowed two runs on six hits with six strikeouts over six innings. He did not issue a walk. He pitched around runners in three of his first four innings thanks in part to dazzling defensively plays from third baseman Luis Valbuena, left fielder Jake Marisnick and Correa.

"I think ... it allows you to be a little more aggressive," McHugh said of the defensive support. "Not have to nibble so much, especially against a team like this. When our guys can make plays and keep those guys off base, their big boppers, it just gives you a chance to go out and make your pitches a little bit more aggressively."

McHugh surrendered runs in the fifth and sixth yet allowed three or fewer earned runs for a seventh successive start dating to June 15. Angels first baseman Ji-Man Choi opened the fifth with a home run to right field, his second on the season. Shortstop Andrelton Simmons had an RBI single in the sixth that scored third baseman Yunel Escobar.

Angels right-hander Jered Weaver (8-8) entered having allowed 10 earned runs in 11 1/3 innings over two starts against Houston this season. Gattis' 350-foot, two-out homer to left field in the second inning scored Preston Tucker and Correa, who singled leading off the frame.

Weaver avoided Gattis an inning later by getting Carlos Gomez to fly out to right with the bases loaded, but Gattis struck again in the fourth, belting a leadoff homer to push the Houston lead to 5-0. George Springer delivered a second consecutive hit two batters later with an RBI single that scored Marisnick, who followed Gattis with a double.

"Uncharacteristically wild for Weaver to walk three in four innings," Angels manager Mike Scioscia said. "One thing with Jered is he normally makes guys hit the ball, but tonight, he got behind a lot of counts."

Weaver was done after four innings having allowed six runs on seven hits and three walks with just one strikeout. Weaver saw his ERA against the Astros this season balloon to 9.39 while falling to 0-3.

"Just having to work hard those couple innings wore me out a little bit," Weaver said. "I was erratic from the get go. I don't remember the last time I walked somebody on the first four pitches of the game. I had to battle tonight."

NOTES: Angels C Carlos Perez was recalled from Triple-A Salt Lake and hit eighth. Perez was batting .204 with four home runs and 23 RBIs over 58 games before being optioned June 8. In seven games with the Bees, Perez batted .355 with two home runs and nine RBIs. The Angels optioned C Juan Graterol to Salt Lake to make room for Perez. ... Astros C Jason Castro was scratched from the starting lineup after taking a foul tip to the right hand in the ninth inning Friday night. Castro had lingering soreness on Saturday, with increasing pain while swinging the bat. Evan Gattis, who was hit by a pitch on the hand Wednesday in Oakland, replaced Castro in the starting lineup. ... The Texas Rangers claimed former Astros INF Matt Duffy off waivers. Duffy was designated for assignment July 16 when the Astros signed Cuban free agent INF Yulieski Gurriel and added him to their 40-man roster.