TORONTO -- With the way Hasashi Iwakuma has been pitching these days, he does not need lot of support from his hitters.

Needed, or not, he got plenty on Saturday afternoon. Nelson Cruz hit two home runs, including the ninth grand slam of his career, and had seven runs batted in to lead the Seattle Mariners to a 14-5 victory over the Toronto Blue Jays.

Cruz hit his grand slam against knuckleballer R.A. Dickey in the third and added a three-run shot against Drew Storen in the eighth.

Kyle Seager hit a two-run homer against Jesse Chavez in the sixth.

"I don't remember the last time I had that many runners on base," Cruz said. "It's always nice to have that chance and to deliver in those situations. Kuma, he stepped up big time today. He threw the ball down and kept the ball away from those guys."

It was the third career grand slam allowed by Dickey, the first since May 4, 2014, also against Seattle.

"I've been pretty fortunate this year staying away from the multi-run home run," Dickey said. "The last two games it's really bit me. I felt like I executed a pretty good pitch to Cruz and he did a good job of staying with it."

The Mariners (50-47) are 5-3 since the All-Star break and have won the first two games of the three-game series.

Michael Saunders hit two solo homers for the Blue Jays to give him 19 for the season and three in the series against his former team.

"We got some big hits," Mariners manager Scott Servais said. "Cruz with the grand slam and we kind of got the line moving after that. We got a bunch of ground ball base hits through the holes and it was a good offensive day for us. We have days like that and we don't kind of capitalize and continue to add on. Today we did, which was great to see."

The Blue Jays took a 1-0 lead in the second on a sacrifice fly by Josh Thole.

Cruz hit his 24th homer of the season in the third after the Mariners loaded with bases with one out on an infield single by Shawn O'Malley, who was forced at second on a grounder by Norichika Aoki, and two hit batters, Seth Smith and Robinson Cano.

Dickey loaded the bases again in the fourth. Leonys Martin singled to left, Chris Iannetta walked and O'Malley hit an infield single to shortstop. Aoki lined an RBI single off the glove of shortstop Troy Tulowitzki.

Left-hander Franklin Morales replaced Dickey and got a double-play grounder from Smith that allowed another run to score.

"I thought (Dickey) had a pretty knuckleball early on," Blue Jays manager John Gibbons said. "What killed him was he hit those two guys and then Cruz comes up and hits grand slam. They loaded up the bases after that, too. ...they have a pretty good hitting team over there. It was one of those games where everyone gets caught up on it when everything goes south on you."

"It was a tough one to control today," Dickey said. "It was a weird outing, four infield hits, a couple of hit batsmen. ... Sometimes you're at the mercy of the pitch, when you let it go it's going to do what it's going to do."

The Mariners scored five runs against Chavez in the sixth. Iannetta led off with a double, O'Malley beat out a bunt single and Aoki and Smith hit RBI singles to right. Cano loaded the bases with a single.

Another run scored when Cruz grounded into a double play. Seager followed with his 19th homer of the season to put Seattle ahead 11-1. Bo Schultz replaced Chavez.

NOTES: Seattle recalled LHP David Rollins from Triple-A Tacoma after placing SS Ketel Marte (mononucleosis) on the disabled list. Rollins was optioned to Tacoma Wednesday when RHP Felix Hernandez was reinstated from the DL. ... Toronto OF Ezequiel Carrera returned to the starting lineup Saturday for the first time since July 16. He has been resting a sore Achilles tendon, returning to strike out as a pinch hitter Friday. ... Blue Jays RF Jose Bautista (turf toe) was 0-for-3 for Triple-A Buffalo on Friday, the second game of his rehabilitation assignment. He was 1-for-3 with a homer with Class A Dunedin on Wednesday. He has not played since June 16 and is scheduled to rejoin Toronto on Monday. ... Seattle LHP Wade Miley (6-7, 5.36 ERA) will face Toronto LHP J.A. Happ (12-3, 3.43 ERA) in the finale of the three-game series Sunday. 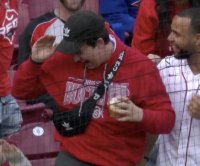 MLB // 7 hours ago
Reds fan accidentally catches baseball in beer cup, chugs for crowd
May 24 (UPI) -- A Cincinnati Reds fan attempted to catch a foul ball during the team's loss to the Chicago Cubs, but his beer did most of the work, as the souvenir landed in the cup placed directly in front of him. 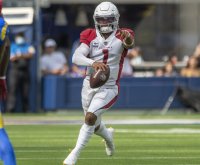 NBA // 1 day ago
Heat's Tyler Herro out for Game 4 vs. Celtics
MIAMI, May 23 (UPI) -- The Miami Heat will be without guard Tyler Herro for Game 4 of the 2022 Eastern Conference finals, the team said Monday. Herro sustained a groin injury in Game 3.
Advertisement