By Frank Cooney, The Sports Xchange
1/3 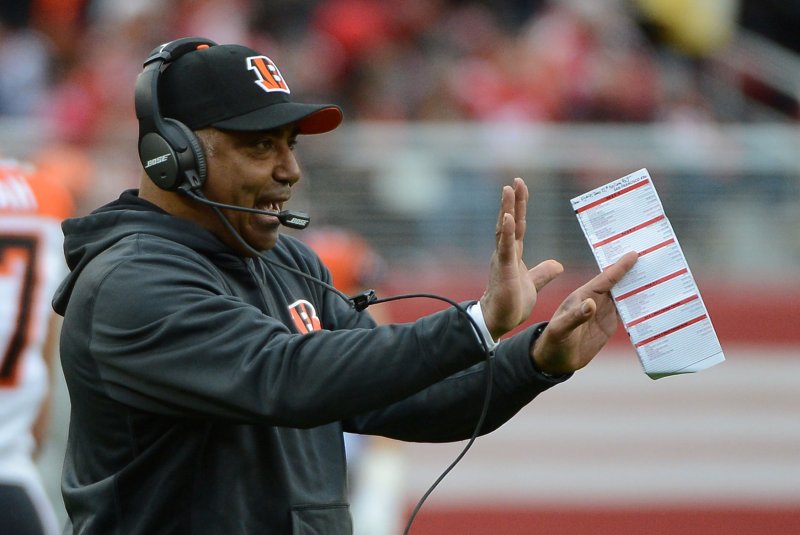 Cincinnati Bengals Head Coach Marvin Lewis calls to officials asking for a review on a goal line play against the San Francisco 49ers in the second quarter at Levi's Stadium in Santa Clara, California on December 20, 2015. The review overturned the ruling on the field and the play was ruled a TD as the Bengals defeated the 49ers 24-14. Photo by Terry Schmitt/UPI | License Photo

In his 14th season as the Cincinnati Bengals head coach and still seeking a playoff win after seven tries, Marvin Lewis will welcome 18 returning starters to the first full training camp practice July 28 in the beginning of another attempt to overcome their challenges after finishing 12-4 and first in the AFC North last year.

But the challenge they could not overcome in the wild, wild-card playoff loss was themselves. In perhaps the most spectacular act of suicide in NFL playoff history, the Bengals handed the Pittsburgh Steelers an 18-16 decision thanks to chaotic final moments that included consecutive 15-yard penalties against Bengals cornerback Adam Jones and linebacker Vontaze Burfict.

As a direct result of that embarrassment, the Bengals will be without Burfict for the first three games, suspended by the league for multiple player safety violations.

Did this send a message to the Bengals?

You make the call. They re-signed Jones -- admittedly one of the most athletic cornerbacks in the league -- to a contract worth $22 million over three years with a $2 million signing bonus and $6 million guaranteed. They also signed free-agent safety Taylor Mays (Oakland), a renowned head-hunter since his days at USC as well as during a previous stint in Cincinnati, who is already suspended for the first four games for substance abuse.

The secondary took a hit itself in free agency with veteran corner Leon Hall and safety Reggie Nelson moving on. With the first pick in the draft, the Bengals grabbed Houston cornerback William Jackson III (No. 24 overall). WJIII impressed scouts with his aggressive coverage, so he should fit right in.

In an effort to control his crew, defensive coordinator Paul Guenther is working with three new assistants -- Jacob Burney (defensive line), Jim Haslett (linebackers) and Kevin Coyle (secondary). For Coyle, the former Miami defensive coordinator, this is his second stint with the Bengals. Guenther was also the secondary coach from 2001 to 2011. He was on Dick LeBeau's staff and was retained when Marvin Lewis was hired in 2003.

As usual, most of the attention is focused on quarterback Andy Dalton, entering his sixth season and under his third offensive coordinator, former quarterbacks coach Ken Zampese, who takes over for Hue Jackson, now testing his luck as head coach of the Cleveland Browns.

Dalton led the Bengals to a 10-2 record before fracturing his right thumb in the first quarter of a Week 14 loss against Pittsburgh. It was an injury that forced him to miss the final three games of the season, plus the AFC wild-card game against Pittsburgh. He still set a Cincinnati franchise record with a passer rating of 106.3, which was good for No. 2 in the NFL behind only Seattle's Russell Wilson (110.1).

Dalton will be challenged this year by the departures of receivers Marvin Jones and Mohamed Sanu. The Bengals drafted Pittsburgh's wide receiver Tyler Boyd (Round 2, No. 55) and signed veteran Brandon LaFell (New England).

Here is a closer look at the newcomers and key players and how they should factor into the Bengals' 2016 team:

--Given how his season came to an end in Week 14 with a fractured thumb against Pittsburgh, the fact that quarterback Andy Dalton is healthy and looking as sharp as he played last season is the most encouraging item to come out of the Bengals' offseason workouts. Dalton set a franchise record with his 106.3 passer rating last season. He's been on the mark throughout OTAs and the just-completed minicamp. His decision-making and leadership improved last season. The Bengals will need that to continue this season as they work in new receivers behind A.J. Green.

For all of their troubles in the postseason, the Bengals don't panic when it comes to the draft. They trust their board, so when the receivers they liked at this spot were gone, they had no hesitation picking Jackson. He'll get to learn and earn his way onto the field.

Here is why the Bengals didn't hesitate on Jackson in the first round: Boyd is another big target who will fit right in with A.J. Green and tight end Tyler Eifert. He doesn't have a lot of raw speed, but is fast enough to become Pitt's all-time leading receiver in catches and yards, surpassing Larry Fitzgerald.

The knock on Vigil coming out was his size, but the guy has a nose for the ball and did nothing but produce tackles in college. Has enough speed that he played some running back in college. Won't start, but can contribute immediately on special teams.

Domata Peko and Pat Sims are older players entering the final year of their contracts. Billings has the strength to hold up and be disruptive against the run, a must playing in the AFC North.

Depth is lacking behind a strong starting group of offensive linemen, so Westerman is a good fit at this spot. Was top recruit from state of Arizona coming out of high school, went to Auburn before transferring back home.

Has the speed to be a true deep threat, something that the Bengals lost with the departure of Marvin Jones in free agency. Not a polished receiver, but averaged 17.4 yards per catch on 37 receptions as a senior.

Final pick of this year's class falls into a position group that will give him a chance to make the roster. Earned his reputation at Illinois as a special teams stalwart. That's a good reputation to have when you're looking for a job in the NFL.

--CB Chykie Brown: Didn't play in 2015 due to knee injury, but will have shot at playing time in nickel.

--S Taylor Mays: Has experience in system, but that's no guarantee of a roster spot.

--Nelson aigned with Oakland as an unrestricted free agent. His veteran leadership and professionalism will be missed in the secondary. Six of his 23 interceptions as a Bengal came against Pittsburgh's Ben Roethlisberger.

Sports News // 1 day ago
Wimbledon 2022: Djokovic rolls into Round of 16, Sakkari bounced
July 1 (UPI) -- Novak Djokovic roared into the Round of 16 with a straight-sets win over Miomir Kecmanovic on Friday at Wimbledon. Maria Sakkari became the latest upset victim, losing in straight sets to unseeded Tatjana Maria.

Sports News // 1 day ago
Mandaloun, Life Is Good, Ce Ce return in July Fourth weekend horse racing
July 1 (UPI) -- Top performers in many of horse racing's divisions are back in action during the Fourth of July weekend with even more top-level action in France, Germany, England and South Africa.

NBA // 1 day ago
Nuggets, Jokic agree to NBA-record $264M contract
July 1 (UPI) -- The Denver Nuggets and All-NBA center Nikola Jokic agreed to a five-year extension worth at least $264 million, the most lucrative pact in league history.

Sports News // 1 day ago
Rafael Nadal, Coco Gauff, Amanda Anisimova advance to 3rd round at Wimbledon
July 1 (UPI) -- Two-time Wimbledon champ Rafael Nadal and Americans Cori "Coco" Gauff and Amanda Anisimova are among the players who have advanced to the third round in London, where play keeps being interrupted by rainy weather.