Baltimore Ravens' Javorius Allen (37) celebrates after scoring on a three yard run over the Pittsburgh Steelers during the second half of their NFL game at M&T Bank Stadium in Baltimore, Maryland, December 27, 2015. Baltimore won 20-17. Photo by David Tulis/UPI | License Photo

When the Baltimore Ravens begin their full training camp on July 27, ninth-year head coach John Harbaugh will have 17 starters from last year's injury-riddled team that limped to a 5-11 record, third in the AFC North.

Eight of those starters were on injured reserve last season including quarterback Joe Flacco, who had offseason knee surgery and should be ready for action in training camp. Among other recovered injury victims are linebacker Terrell Suggs, running back Justin Forsett and wide receivers Steve Smith Sr. and Breshard Perriman.

When Flacco was out last season, Jimmy Clausen started three games and Matt Schaub two. They are gone and the Ravens, who traditionally carry only two quarterbacks on their roster, hope that Ryan Mallett, who signed a two-year deal Dec. 15, can be more consistent if needed again this year.

In a move that might help keep Flacco healthy, the Ravens drafted Notre Dame offensive tackle Ronnie Stanley with the No, 6 overall pick. That will help soften the blow of losing versatile Kelechi Osemele in free agency (Oakland). With Eugene Monroe released in the offseason, Stanley will get a fair shot at the starting left-tackle spot.

And after struggling without Suggs last year, the Ravens used their next two draft picks to add pass-rush pressure, taking Boise State linebacker Kamalei Correa (Round 2, No. 42) and BYU defensive end Bronson Kaufusi (Round 3, No. 42). In spring workouts, the Ravens were also impressed with sixth-round pick Maurice Canady, a tall and talented cornerback from Virginia.

In a move to regain leadership reminiscent of that imposed by former star safety Ed Reed, the Ravens signed free agent Eric Weddle, the long-time defensive captain of the San Diego Chargers. His three-year deal calls for $26 million with a $7 million signing bonus and $13 million guaranteed.

Here is a closer look at the newcomers and key players and how they should factor into the Ravens' 2016 team:

Canady caught the attention of coaches throughout the offseason camps. He had an interception during a Tuesday minicamp practice and his knack for getting to the football is a skill the Ravens sorely missed last season. Canady was picked up in the sixth round from the University of Virginia, prompting several draft experts to laud the value of the selection. Canady has said he would like to emulate other cornerbacks like Seattle's Richard Sherman and the Redskins' Josh Norman, both of whom were also late-round picks at cornerback.

"I think Canady has been outstanding in this camp," defensive coordinator Dean Pees said. "I'm really, really, really pleased with him. ... Maurice, I think, has been one of the top production guys, really, in the whole camp of all the defensive backs."

The Ravens adhered to their philosophy of choosing best player available as opposed to drafting for need. Stanley, a junior, was a three-year starter for the Fighting Irish. With the release of Eugene Monroe, Stanley is in the driver's seat to open the season as the Ravens' starting left tackle. Stanley could anchor the offensive line for the long term and provide added protection for quarterback Joe Flacco's blind side.

Baltimore landed a much-needed pass rusher with this selection. Correa was named second-team All-Mountain West after leading the Broncos with 11 tackles for a loss and seven sacks last season. He is also fast and versatile. The Ravens placed more value on Correa than other teams and they were able to trade back to get more picks and still select him. His performance in the offseason workouts has put him in position to earn a starting job for Baltimore.

The Ravens added more depth to their pass rush and found a possible heir apparent to Chris Canty, who was not re-signed in the offseason. Kaufusi is a versatile player who can play multiple positions. He had 26.5 career sacks in his four years at BYU. He was especially stellar his senior year when he finished with 11 sacks and 20 tackles for loss.

Young will be able to compete for a starting spot opposite Jimmy Smith. Young was a solid corner for the Owls and had five interceptions in his final two years as a starter. He is physical in press coverage and has good speed.

Moore will provide another big-play threat for quarterback Joe Flacco. He averaged 19.3 yards per catch over his four years with the Bearcats. Moore came up big his senior year with 39 receptions for 823 yards and seven touchdowns. He can play on the side, but also has experience as a slot receiver.

Lewis, a transfer from Colorado, will provide depth to the offensive line because he is able to play multiple positions. He started at left tackle for the Cornhuskers but could compete for a spot at left guard, where he started 12 games for the Buffaloes.

Henry slipped in the draft because of the number of quality defensive tackles available. However, he could be a force for an already stellar group in Baltimore. He finished with 6.5 sacks and 10 tackles for loss in his senior season for the Wolverines, earning All-Big Ten honorable mention.

Even though the Ravens are stocked at running back, they stayed true to their board and picked up Dixon, a shifty and elusive runner. Despite missing two games last season with an ankle injury, he still had 1,070 rushing yards, 467 receiving yards and 26 touchdowns. Dixon is also highly regarded as a blocker, which will make him a perfect fit for Baltimore. Dixon finished with 87 career touchdowns, second most in Division I history behind Navy quarterback Keenan Reynolds, who was also taken by the Ravens in the sixth round.

The Ravens went for another solid pass rusher with Judon, who led college football with 20 sacks last season. Baltimore has been successful taking players from small schools and Judon fits that mold. He received the Gene Upshaw Trophy, which goes to the top defensive lineman in Division II football. Judon was also the Great Lakes Intercollegiate Athletic Conference's Defensive Lineman of the Year.

Reynolds will try to convert to wide receiver after having a prolific career as a quarterback in Navy's triple-option. Reynolds scored 88 touchdowns in four years, which are the most rushing touchdowns in Division I history and the most total touchdowns in the history of the Football Bowl Subdivision. He finished fifth in the Heisman Trophy voting last year and was named a third-team All-America. Reynolds has already shown a knack for catching the football during the Ravens' offseason camps and his dedication to learning the playbook has been impressive.

Baltimore added more depth to the secondary with its final pick of the 2016 draft. Canady, a three-year starter for the Cavaliers, is a big, speedy cornerback who can match up with receivers of equal or bigger size. He finished with five career interceptions. Canady can also be an effective special teams player. Canady has been singled out by several Ravens' coaches for his ability to get to the football in the spring workouts.

--WR Mike Wallace: Free-agent pickup in offseason that is expected to provide another downfield threat.

--Osemele's decision to sign with Oakland as a free agent left the Ravens with a void on the offensive line. The Ravens are hoping first-round pick, Notre Dame tackle Ronnie Stanley can make an immediate impact. 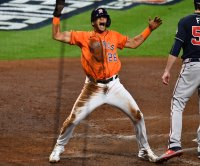 MLB // 8 hours ago
Astros storm to Game 2 win over Braves, tie World Series at 1-1
Oct. 27 (UPI) -- The Houston Astros bounced back from their Game 1 loss with a dominant 7-2 win over the Atlanta Braves in the second game of the World Series on Wednesday night at Minute Maid Park in Houston.

NFL // 10 hours ago
Cardinals' J.J. Watt ruled out for TNF game vs. Packers due to shoulder injury
Oct. 27 (UPI) -- Arizona Cardinals defensive end J.J. Watt was ruled out of Thursday night's game against the Green Bay Packers because of a shoulder injury, the team announced.