LOUDON, N.H. -- After one of the roughest stretches in his career, Jimmie Johnson got a welcome boost on Friday at New Hampshire Motor Speedway.

Johnson edged Kyle Busch (133.830 mph) for the top starting spot, claiming his first pole at the Magic Mile, his first of the 2016 season and the 35th of his career.

Busch, however, owned the fastest lap of the day, running 134.080 mph to pace the second round, but Johnson was quickest when it counted most.

With only one top 10 in his last nine races, Johnson needed a catalyst, but his car was so off-kilter during a mock qualifying run during opening practice that he thought something had broken on the No. 48 Chevrolet.

While his team reset the car to the specifications in place when it unloaded, Johnson went on a 32-mile bike ride with fellow driver Matt Kenseth to clear his head.

When he returned for time trials, the car was better.

"We had a really weird set of tires or something odd go on on our mock run at the end of practice," Johnson said. "It felt like something was broken on the car. So to come back and have good speed in the car and advance, I knew after round two we would have a shot at the pole, because we were able to keep our lap count down and advance to the next round on our first lap in each session.

"And then put together a smooth lap. I felt like it could have been faster, but certainly a good smooth one, and it was enough."

And having speed in the car was a shot of adrenaline to a team that has been struggling.

RELATED If Dale Earnhardt Jr. is sidelined for Indy, Jeff Gordon will replace him

"We've had a lot of tough races," Johnson acknowledged. "Qualifying has been so-so. I'm not the best at qualifying. I think the majority of that emotion was the fact that we actually got a pole.

"We don't have many. It's not our strong suit. Just a good day all-in-all, and certainly something this Lowe's team needed after the tough couple of months. ... Today's a big day for us."

Martin Truex Jr. will start third after bumping his way into the final 12 by .001 of a second over fellow Toyota driver Carl Edwards in the closing seconds of the 10-minute second round. Truex covered the distance at 132.827 mph to knock Edwards out of the final round.

Truex then secured the third position on the grid with a lap of 133.371 mph.

"It's been a hectic day," Truex said. "It seems like we've been thrashing all day long. Everything is last minute, last second and just throwing stuff at it, but when it counts we keep hitting it.

"We were first in practice and third here. We barely made it through the second round and then went on to finish third. All in all, it was a good day. Just a lot of quick decisions by everyone."

Kurt Busch will start fourth, followed by Denny Hamlin and Joey Logano, who led the first round of time trials at 133.166 mph.

"He did come here and test for us," said Johnson, who is driving a new chassis this week. "And he gave us the foundation for the way our cars unloaded today. So big thanks to the 88 team, Dale and (crew chief) Greg (Ives) and those guys for having a great test session and giving us an opportunity for the pole today." 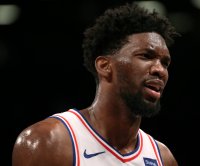 NBA // 1 hour ago
76ers' Joel Embiid "won't be 100%" until off-season as Hawks tie series
June 15 (UPI) -- All-Star center Joel Embiid says he won't be 100% healthy until the off-season after he struggled to produce over long stretches during the Philadelphia 76ers' Game 4 loss to the Atlanta Hawks.

MLB // 2 hours ago
Adam Wainwright carries Cardinals over Marlins, back to .500
June 15 (UPI) -- Veteran pitcher Adam Wainwright held the Miami Marlins to just four hits and two runs over six innings to help the St. Louis Cardinals earn their latest win and push their season record back to .500. 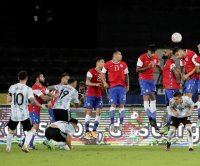 NBA // 3 hours ago
Kawhi Leonard, Paul George lift Clippers over Jazz in Game 4
June 15 (UPI) -- Kawhi Leonard and Paul George poured in 31 points apiece to lead the Los Angeles Clippers to a Game 4 victory against the Utah Jazz to tie the Western Conference Semifinals series at 2-2.