Kris Bryant has the Chicago Cubs in position to make history, and Josh Donaldson could be on the verge of repeating as American League MVP.

Based on the stellar first-half production of Bryant and Donaldson, the Cubs and Toronto Blue Jays are contenders at the All-Star break.

There are many players with a worthy argument in the MVP debate at the break, including ageless Boston Red Sox designated hitter David Ortiz and San Francisco Giants right-hander Johnny Cueto.

Here are the first-half MVPs of each team in the National League, according to The Sports Xchange's national network of baseball writers:

The Nationals have a chance for a second straight National League MVP batting in the third spot -- but it might not be RF Bryce Harper, the unanimous winner last season. 2B Daniel Murphy, signed as a free agent in January, has built on the success he had last October with the New York Mets in postseason play. He leads the NL with a .348 average, and he already has a career-high 17 home runs. Murphy was moved up to the cleanup spot by manager Dusty Baker early in the season, and then in early July, he hit third with Harper dropping down to fourth. Either way, Murphy and Harper make a strong one-two punch for the Nationals.

RHP Jose Fernandez is Miami's ace and has again established himself as one of the best pitchers in baseball. Fernandez, who turns 24 on July 31, has been an All-Star in the only two years in which he was not coming off elbow surgery, 2013 and 2016. He is 11-4 with a 2.52 ERA this season. Plus, his enthusiastic spirit lifts the Marlins, especially at home, where he is nearly unbeatable. For his career at Marlins Park, Fernandez is 25-1 with a 1.43 ERA.

OF Yoenis Cespedes. As bad as it was for the Mets to watch Washington 2B Daniel Murphy dominate them throughout the first half, it could have been worse. What if Cespedes decided to sign a longer-term deal with the Nationals -- who reportedly offered him a five-year contract -- instead of accepting the Mets' three-year deal with an opt-out after the first season? Cespedes is this generation's Mike Piazza, the right-handed hitter with mammoth power who is burdened neither by the big stage nor the task of carrying an otherwise mundane lineup. The true reminder of Cespedes' nature as the Mets' most indispensable player is reflected not in the fact he leads the team in every notable hitting category but that without him, the underachieving Alejandro De Aza -- who was signed a month before Cespedes' surprising return -- would be seeing regular at-bats.

The lone team representative at the All-Star Game, CF Odubel Herrera remained the one constant for an offense that lacked any consistency. He leads the team with a .378 on-base percentage and 96 hits. He also is batting .294 with 12 stolen bases. Among qualified NL outfielders, Herrera ranks fourth in on-base percentage, and tied for fourth in hits (97). This is just his second year in the majors since he was selected in a Rule 5 draft pick from the Texas Rangers' organization.

RHP Julio Teheran established himself as a No. 1 starter and earned a spot on the All-Star team by going 3-8 with a 2.96 ERA. Teheran's first-half performance also made him one of the team's two untouchable players (1B Freddie Freeman being the other), unless a major haul of established major league bats can be obtained in return. Through his first 17 starts, the opposition is batting only .207 against Teheran. His record was hurt by a major-league-worst 2.88 run-support average.

Kris Bryant is not only the Cubs' first-half MVP, but his numbers and performance would also make him a top contender for NL honors. The versatile third baseman/outfielder is batting .286 in his second season. He has played in a team-high 86 of the Cubs' 88 games and appeared at three different infield positions in addition to playing 35 games in the outfield. Bryant, the 2015 NL Rookie of the Year, has a league-leading 25 home runs and is second in the majors behind Baltimore's Mark Trumbo (28). Bryant's 73 runs top the league. He is third with 65 RBIs, and his 190 total bases also rank third.

3B Matt Carpenter was unquestionably the team's best player in the first half, and he might have been baseball's best leadoff hitter, too. Before sustaining a right oblique strain July 6, Carpenter was on pace for the first 100-RBI season of his career and was leading the National League in on-base-plus-slugging percentage. His performance was a major reason why St. Louis was one of the highest-scoring teams in baseball. As a leadoff man, he is Rickey Henderson minus the speed.

LF Starling Marte. This is a close call between Marte and right fielder Gregory Polanco, but Marte ultimately gets the edge due to consistency. The 27-year-old, who will make his first All-Star appearance after being named an injury replacement on Saturday, has helped steady Pittsburgh's offensive attack with a .316 batting average. He doesn't share Polanco's pure power numbers, but has been one of the few Pirates to avoid any noticeable dips in production throughout the first half.

RHP Junior Guerra, a 31-year-old rookie who spent four years wandering the desert of unaffiliated baseball, was dominant in the first half, going 6-1 with a 2.93 ERA in 12 starts before giving up three runs in 5 2/3 innings Sunday against St. Louis. Joining the team in early May to replace the struggling Taylor Jungmann, Guerra stabilized a woeful rotation and baffled opposing hitters with his split-finger fastball.

One of the Reds' primary objectives coming into this season was to find an everyday left fielder. Consider it done. Adam Duvall, who was acquired from the San Francisco Giants in exchange for RHP Mike Leake, earned a spot on the National League All-Star team and a Home Run Derby nod after leading the team with 23 homers to go along with 61 RBIs in 83 games. Duvall improved quicker than expected in left field, drawing regular praise from manager Bryan Price during the first half.

RHP Johnny Cueto has taken the ball 18 times this season, and the Giants have won 16 of those games. That is better than Clayton Kershaw. Better than Jake Arrieta. Better than ... well, much better than 14-18 record the club amassed in starts following those of ace LHP Madison Bumgarner in 2015. Heck, Cueto has been so good (13-1. 2.47), it is hard to call Bumgarner (10-4, 1.94) the ace anymore. 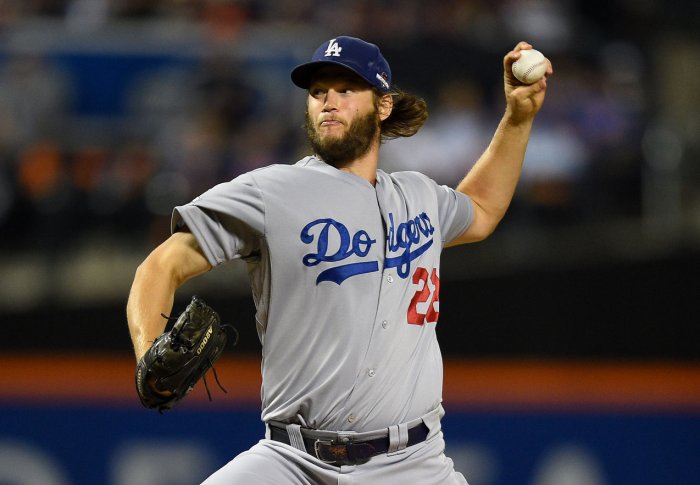 As the ace of a starting rotation built on spare parts, bailing wire and hope, LHP Clayton Kershaw was dominating at historic levels before a herniated disc put him on the disabled list June 30. Kershaw, who led the major leagues with 145 strikeouts before the injury, not only has the best earned-run average in the majors at 1.79. The left-hander allowed opponents to bat just .185 against him and conceded only six home runs and nine walks in 121 innings. Perhaps more importantly from the Dodgers' perspective, Kershaw has been the only starter to pitch into the late innings consistently. On the DL since his last start June 26, Kershaw pitched off a mound July 10, his continued absence increases the strain on both the rotation and an increasingly beleaguered bullpen.

3B Nolan Arenado is capable of impacting the game on a nightly basis on both sides of the ball and usually does. He is well on his way to winning his fourth Gold Glove Award in as many seasons and was selected to the National League All-Star team for the second straight year. Arenado is hitting .287 with 23 home runs and an NL-leading 70 RBIs with a .930 OPS. He had an on-base percentage of .328 in 2014 and .323 last but has improved to .359 because he has already drawn a career-high 38 walks and has cut his strikeouts -- 52 this season or an average of one every 7.4 plate appearances, vastly better than his average of one every 6.0 plate appearances last year.

1B Wil Myers. Since he adjusted his swing at the end of May to add a front leg kick, Myers has been among the most productive hitters in the National League (12 homers and 38 RBIs in 35 games). Plus, he loves playing the game. His approach to baseball is rewarding to see. He has become a fan favorite in San Diego. The Padres should have moved Myers to first last season. Now it's open for debate if the much-traveled Myers is moved again -- this time at the trade deadline -- for a team seeking a productive and relatively reasonably priced right-handed bat.

Perennial All-Star 1B Paul Goldschmidt had his usual strong first half, but 3B Jake Lamb is the choice here. Lamb reworked his batting stance and approach over the winter and the result has been some big-time numbers -- 19 doubles, 20 homers, an NL-high .983 OPS. Those are magnified by his No. 4 spot in the batting order behind Goldschmidt, who is second in the majors with 64 walks. Teams still are wary of Goldschmidt, but Lamb has them think twice.