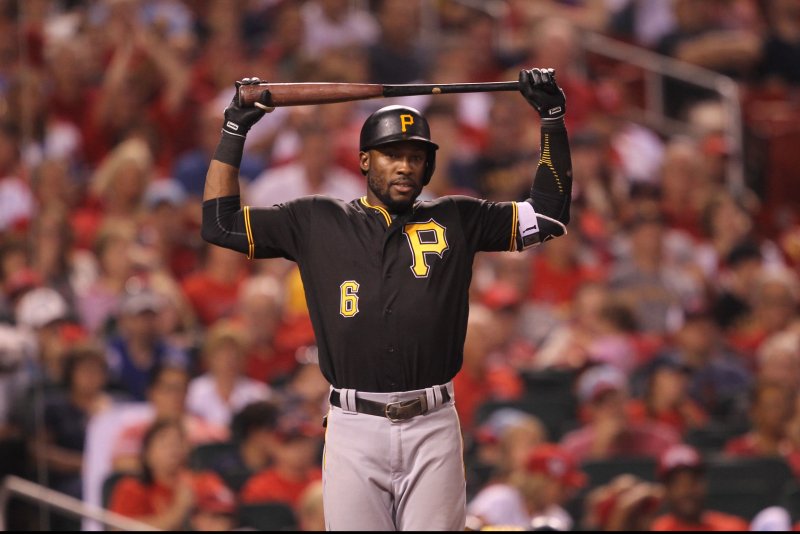 Pittsburgh Pirates' Starling Marte reacts after striking out in the seventh inning against the St. Louis Cardinals at Busch Stadium in St. Louis on July 6, 2016. Pittsburgh won the game 7-5. Photo by Bill Greenblatt/UPI | License Photo

Pittsburgh Pirates catcher congratulates pitcher Mark Melancon after the third out and a 7-5 win over the St. Louis Cardinals at Busch Stadium in St. Louis on July 6, 2016. Photo by Bill Greenblatt/UPI | License Photo

ST. LOUIS -- While the Pittsburgh Pirates set a new season high with seven straight wins, the St. Louis Cardinals might have lost more than a game Wednesday night.

Not only did St. Louis cough up a four-run lead on its way to a 7-5 defeat at Busch Stadium, it might have also lost its only All-Star Game representative for a while.

Second baseman Matt Carpenter suffered a right oblique injury on a half-swing at a Jeff Locke pitch in the bottom of the third inning and left the game. He was sent for more tests, including a trip into an MRI tube, but further details weren't available after the game.

The last time Carpenter suffered an oblique strain was in 2012, and he missed more than a month. Any length of absence will be a critical blow to a team which is already minus several key pieces due to injury or illness, and has yet to show the consistency needed to make a playoff push.

It appeared St. Louis (43-41) would at least overcome Carpenter's loss for a game as it presented starter Jaime Garcia, who entered the night with an 0.57 ERA in six career games against Pittsburgh (43-40), with a 5-1 advantage after a four-run fourth.

But Garcia lasted just one more inning and two batters into the sixth, and a suddenly shaky bullpen hacked up the 5-2 lead he gave it before it recorded the seventh inning's second out.

After Josh Harrison and Sean Rodriguez singled home runs in the sixth to draw the Pirates within a run, Jung Ho Kang put them ahead to stay when he laced a two-run double in the seventh off Jonathan Broxton (1-1). Kang later scored on a two-out error by shortstop Aledmys Diaz.

It was the first RBI and extra-base hit for Kang since June 24 against the Los Angeles Dodgers. Prior to his double, Kang was locked in a 5-for-37 slump.

"I've been watching a lot of videos with our hitting coach," Kang said through an interpreter. "I felt it click yesterday. I can't really describe the click, but I felt it in the box."

Kang's new-found click meant the Pittsburgh bullpen could lock up another win. Throwing five shutout innings after starter Jeff Locke left for a pinch-hitter, the Pirates' relief corps added to their amazing run in which they've allowed only one run in their last 45 1/3 innings, dating back to June 24.

A.J. Schugel (2-2) picked up the win with a clean sixth and Mark Melancon worked around a pinch-hit leadoff single by Tommy Pham in the ninth for his 26th save in 27 chances.

"To win after you get down 5-1 here doesn't happen often," Pittsburgh manager Clint Hurdle said. "We had quality at-bats and never backed away. When you have the mentality of passing the baton, it builds an inning."

Diaz answered David Freese's solo shot with one of his own in the third, then the Cardinals peppered Locke with six singles in the fourth. Jedd Gyorko, Kolten Wong and Diaz knocked in runs with their singles, and Garcia helped his cause with a sacrifice fly.

But Garcia allowed a leadoff homer to Rodriguez in the fifth, then walked Andrew McCutchen and Kang to start the sixth. The Pirates' offense and St. Louis' bullpen took it over from there.

"Obviously, not very good," Garcia said. "I didn't get the job done."

As he left the mound after the fourth inning, Locke got encouragement from Harrison.

By doing so, Pittsburgh climbed into second place in the National League Central, a half-game over the Cardinals. It can notch its first four-game sweep in St. Louis Thursday since 1997.