NEW YORK -- Giancarlo Stanton is not going to play for the National League in the All-Star Game next week. But he put on quite an audition Tuesday night for a spot in the Home Run Derby.

Stanton accounted for all the Marlins offense Tuesday, when he hit a go-ahead two-run homer in the seventh and a game-clinching three-run homer in the eighth inning of a 5-2 win over the New York Mets at Citi Field.

Afterward, Stanton smiled and nodded when asked if he'd like to participate in the Home Run Derby next Monday.

"Unfortunately, I missed two Home Run Derbies that I was supposed to be in," said Stanton, who reached the semifinals of the 2014 Home Run Derby but had to decline invites due to injury last season and in 2012. "I've got some catching up to do."

Both of his homers Tuesday night were Derby-worthy in different ways. Stanton's seventh-inning blast off losing pitcher Steven Matz was a line drive to left-center field hit so hard that Mets center fielder Juan Lagares stopped running after a couple steps.

The eighth-inning shot off Erik Goeddel was a majestic homer that landed deep into the second deck in left field.

"He's a great hitter, he's got great power, he's not hitting very good," Mets manager Terry Collins said. "You have to make a pitch. We didn't make the pitch."

Television cameras captured Stanton grinning during his second trot. The two-homer game was the first of the season for Stanton, who is hitting just .226 with 17 homers and 45 RBIs through the Marlins' first 84 games. He hit .267 with 27 homers and 67 RBIs in just 74 games last season, when he didn't play after June 26 due to a broken hamate bone in his left hand.

"That's what I've been working to get to for a long time," Stanton said. "Just happy that the work finally showed on the field. I was just in (the cage), doing it over and over again with no results."

For Marlins manager Don Mattingly, the homers served as a reminder of what Stanton could do in the second half -- as well as evidence that his first half wasn't too bad itself.

Stanton also contributed with his glove in between homers. He preserved the lead for the Marlins (44-40) in the bottom of the seventh, when he made a sliding catch of Lagares' sinking line drive with two outs and two on.

"We didn't talk about that, right, when you see balls fly out?" Mattingly said. "That was a great play too."

The catch kept left-hander Wei-Yin Chen in line for the win. Chen (5-3) allowed one run on three hits and one walk while striking out five over seven innings.

Marcell Ozuna, who was one of four Marlins named to the All-Star team Tuesday, finished 2-for-3 with a single ahead of Stanton's first homer and a walk prior to the second.

Ozuna will be joined in San Diego by pitchers Jose Fernandez, Fernando Rodney and A.J. Ramos. Rodney gave up a homer to Alejandro De Aza in the eighth and Ramos worked around a two-out walk in the ninth for his 25th save.

Yoenis Cespedes, one of three Mets named to the All-Star team, homered and reached base three times in four plate appearances. Cespedes was selected along with pitchers Noah Syndergaard and Jeurys Familia. Collins will manage the team as a reward for directing the Mets to the World Series last season.

Matz (7-4) allowed two runs on six hits and one walk while striking out six over seven innings for the Mets (45-38), whose five-game winning streak was snapped.

Reyes, who was released by the Colorado Rockies on June 25 after serving a 52-game suspension for an offseason domestic-violence arrest, received a warm ovation prior to his first at-bat and sheepishly doffed his batting helmet.

"That's good to see, because when I came in today, I didn't know what to expect," Reyes said.

NOTES: To make room for INF Jose Reyes on the active and 40-man roster, the Mets optioned INF Matt Reynolds to Triple-A Las Vegas and shifted 3B David Wright (neck surgery) to the 60-day disabled list. ... Mets C Travis d'Arnaud, who wore No. 7 before Reyes' arrival, gave Reyes his old number. D'Arnaud chose 18 as his new number because he is a fan of recently retired NFL quarterback Peyton Manning. ... Marlins 1B Justin Bour (right ankle) returned to Miami for an MRI. Manager Don Mattingly said he didn't expect Bour to be back before Wednesday afternoon's series finale. ... Tuesday marked the 25th anniversary of Major League Baseball approving the Marlins and Colorado Rockies as expansion teams to begin play in 1993. 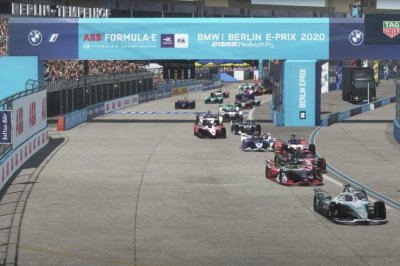