CINCINNATI -- Adam Wainwright had a 7.16 ERA in April. His struggles continued into May.

Some wondered if it was the lingering effect of the Achilles injury which caused him to miss 142 games last season, or perhaps the gradual decline of a 34-year old veteran with 10-plus years on his right arm.

Forget about all that. On Thursday night, the St. Louis Cardinals ace' had command of his fastball, a tight cutter and an effective breaking ball. In short, Wainwright was back to being Wainwright.

Yadier Molina's single with the bases loaded drove home the go-ahead run in the eighth inning, and Wainwright recorded his fifth consecutive quality start, lifting the Cardinals to a 3-2 victory over the Cincinnati Reds at Great American Ball Park.

The Cardinals have won 15 of the past 22 series against the Reds, including eight of 11 at Great American Ball Park.

Wainwright retired 14 straight before hitting Joey Votto with two outs in the sixth. He wound up allowing two runs on two hits and a walk -- all of which came in the first inning -- while striking out nine over six frames.

"After the first inning, he kept fighting," Molina said. "For him, it starts with the fastball, hitting the corners. Throwing the breaking ball down. Nothing bothers him."

Finnegan was frustrated in the sixth when plate umpire Jerry Meals called a balk to move Matt Carpenter, who had walked, into scoring position.

Manager Bryan Price came out to argue, but to no avail. Aledmys Diaz followed with a RBI single to tie the score 2-2.

"Big call," said Price. "I haven't gone back and looked at it, but I usually know when a pitcher's going to throw over, because I've called that many times. It didn't look different to me from the naked eye. I'm not saying it wasn't a balk, but I didn't see it."

Finnegan pitched out of a first-and-second, no-out jam in the seventh.

Reds reliever Ross Ohlendorf (4-5) wasn't so fortunate in the eighth when St. Louis (32-28) loaded the bases with no outs. Molina delivered a one-out single to put the Cardinals on top.

"You give up a leadoff double, and now you're swimming upstream," Price said. "He almost pitched out of it. He got two strikes on Molina before he gets the hit, and then he pitches out of it."

Cincinnati (22-38) went hitless from the second through the seventh inning, including five hitless frames by Wainwright.

"In the fourth or fifth innings I saw a fastball at 94," manager Mike Matheny said. "If he's locating that kind of velocity with movement from the sinker and the cutter, he's going to have a good day. It's a shame we couldn't keep him out there longer."

The Reds had runners at first and second with one out in the eighth after right fielder Stephen Piscotty's diving grab was overturned via replay, giving pinch hitter Ivan De Jesus a single, but Kevin Siegrist retired the next two batters.

Seung Hwan Oh (2-0) earned the win after throwing a scoreless seventh inning. After Siegrist handled the eighth, Trevor Rosenthal pitched the ninth for his 11th save.

Wainwright got off to a slow start, allowing an RBI groundout by Jay Bruce and an RBI single by Adam Duvall to put the Reds ahead 2-0.

Brandon Phillips doubled and scored in the inning to extend his hitting streak to 12 games, a season high for the team.

In the second, Molina doubled and scored on a single by Brandon Moss, who homered twice Wednesday. Molina went 3-for-4 with a double.

NOTES: Cardinals 3B Jhonny Peralta, who came off the disabled list Tuesday and went 4-for-9 with a double, homer and five RBIs in his two starts, was given a day off Thursday. Jedd Gyorko started at third base and went 0-for-4 with two strikeouts. ... On Friday, the Reds are expected to reinstate RHP Anthony DeSclafani (strained left oblique) from the 60-day disabled list for a start against the Oakland A's. ... Reds CF Billy Hamilton is in the concussion protocol after a hard slide into third base Wednesday. Tyler Holt started in center field Thursday. ... A scoring change announced Thursday awarded a hit to Cardinals SS Aledmys Diaz from May 25. It originally was scored an error.

Sports News // 1 day ago
Hughes, Oosthuizen, Henley lead entering U.S. Open final round
June 19 (UPI) -- Mackenzie Hughes, Louis Oosthuizen and Russell Henley were locked in a three-way tie atop the leaderboard after the third round of the U.S. Open golf tournament Saturday at Torrey Pines in San Diego. 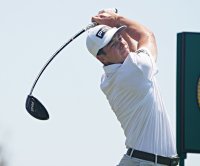 Sports News // 2 days ago
Viktor Hovland withdraws from U.S. Open after sand causes eye injury
June 18 (UPI) -- Norway's Viktor Hovland was forced to pull out of the U.S. Open golf tournament Friday after sand got in his eye and caused severe irritation.