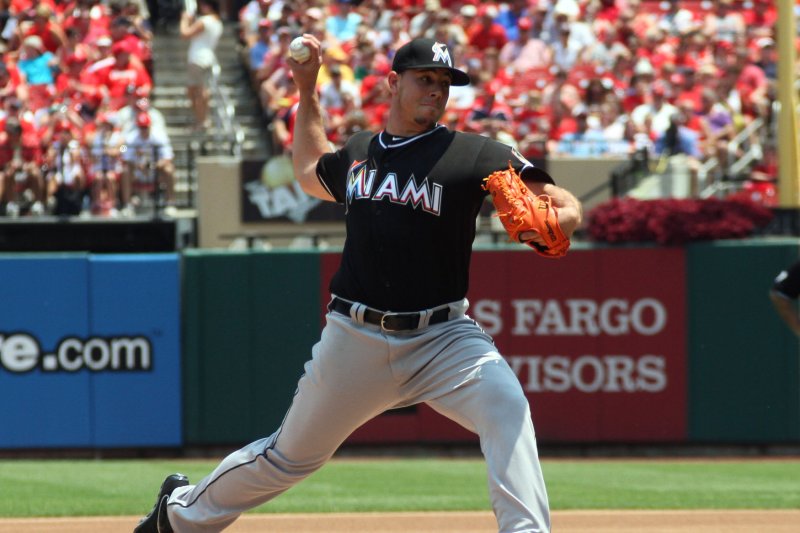 MIAMI -- Jose Fernandez no longer has to go "max effort" on each pitch, according to Miami Marlins manager Don Mattingly.

Fernandez has become more a true pitcher, and that showed through on Sunday as he matched his career high with 14 strikeouts, winning a 1-0 pitching duel against Matt Harvey and the New York Mets.

On Sunday, Fernandez (9-2) threw 100 pitches, including 73 for strikes. He pitched seven scoreless innings for his eighth win in his past eight starts, allowing four hits and no walks.

"But this is something we've been working on -- making pitches in the right situation. Over time, it's something you learn -- to become a pitcher and not just a guy who has good stuff."

The only time Fernandez encountered even mild trouble was in the first inning, when Curtis Granderson hit a two-out double.

Fernandez, who has a 2.29 ERA, retired the next 15 batters in a row, striking out the side in the fourth. During that stretch, New York's Michael Conforto hit a blast to right field in the fifth inning, but Ichiro Suzuki extended fully to make a running catch on the warning track.

"He told me it was a routine catch," said Fernandez, laughing at the absurdity of how well the 42-year-old Suzuki can still play the game.

The Mets did threaten in Fernandez's final inning, getting runners on the corners with two outs. But Fernandez struck out Wilmer Flores swinging. It was Fernandez's final toss of the day, and he knew it, gesturing with a mix of defiance, excitement and satisfaction.

Mattingly, who is a much calmer personality, may not be the biggest fan of such exuberance. But he's certainly a fan of Fernandez's pitching.

"What we like is that he's using his two-seam (fastball) some, he's pitching with his changeup, he's using his breaking ball and spotting his fastball," Mattingly said. "I think we're seeing a more under-control Jose as far as making pitches, and we still get to see the emotional kid who likes to compete."

Harvey (4-8) was nearly as good as Fernandez, allowing just four hits, no walks and one run in seven innings. He struck out three and lowered his ERA from 5.37 to 4.95.

The only extra-base hit Harvey allowed was a double by Derek Dietrich in the fifth.

That's when Harvey had his 11-inning scoreless streak snapped. Dietrich drilled a 2-2 high fastball off the wall in right field and scored on a ground single to center field by J.T. Realmuto.

"You don't want to give up a run in a tight game like that," Harvey said. "I left a pitch over the plate (to Dietrich), and he got to second. I made a pretty good pitch to Realmuto. I wanted a groundball, and I got it. But it wasn't at somebody."

A.J. Ramos earned his 18th consecutive save to start the season, tying a club record set by Carlos Oviedo in 2011. He ended the game by getting Neil Walker to fly out to the warning track in center.

Harvey's second straight strong performance -- he has allowed just one run in his past 14 innings after struggling to start the season -- was the lone bright spot for New York.

"(But) it's still just two (good) starts," Harvey cautioned. "There were massive struggles that happened before. The only thing I'm thinking is to not let that creep back.

"Today was a second step. Going deep into a game and feeling good -- it's definitely a positive."

Mets manager Terry Collins was even more pleased with Harvey.

"He pitched great," Collins said. "The ball up to Dietrich was probably the only mistake he made."

NOTES: Marlins RF Giancarlo Stanton was not in the starting lineup, replaced by Ichiro Suzuki. Stanton hit .173 in May and is at .071 so far in June. Suzuki hit .333 in April and .316 in May. ... The Marlins optioned RHP Cody Hall to Triple-A New Orleans and recalled RHP Brian Ellington from the same team. ... Mets CF Juan Lagares (sprained left thumb) and LF Yoenis Cespedes (hip) were out of the starting lineup. Cespedes was used as a pinch-hitter and flied out. ... Mets C Travis d'Arnaud, on the disabled list since April 26 due to an elbow injury, is set to return within 20 days now that his minor league rehab stint has begun. ... Mets 1B Lucas Duda, on the DL since May 23 due to a back injury, has yet to begin baseball activities. He is likely out through the rest of the month.