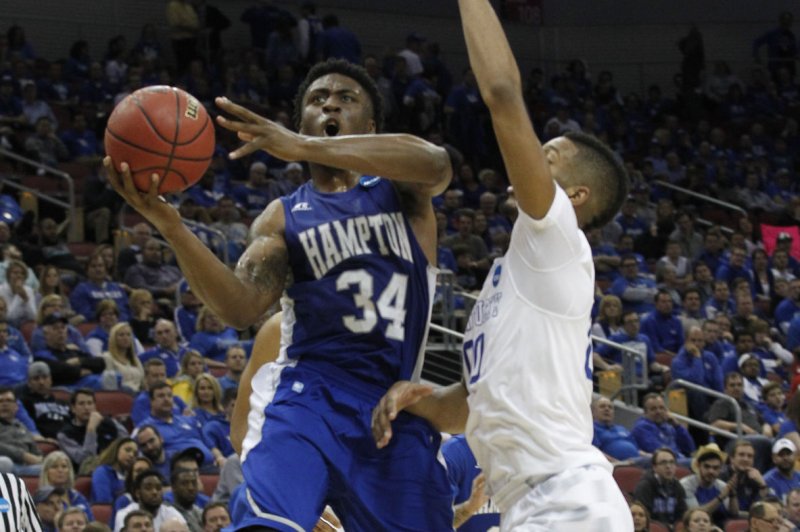 Hampton Pirates' Reginald Johnson (34) fights to get his shot off under pressure from Kentucky Wildcats' Marcus Lee (00) during the second half of play in their second round game of the 2015 NCAA Division I Men's Basketball Championship at the KFC Yum! Center in Louisville, Kentucky, March 19, 2015. Photo by John Sommers II/UPI | License Photo

Kentucky forward Marcus Lee will remove his name from the 2016 NBA Draft, but plans to transfer to another school.

Wildcats freshman Isaiah Briscoe also announced he will return for his sophomore season after averaging 9.6 points and 5.3 rebounds in 2015-16.

The Wildcats announced Lee will be granted a full release with no restrictions, but the Antioch, Calif. native will have to sit out a season due to NCAA transfer rules.

"Marcus Lee informed us today that he is pulling his name out of the draft but has decided he is going to transfer to a school out west to be closer to his family," Kentucky head coach John Calipari said in a statement. "We talked it through together and discussed the team next season, which he said had no bearing on his decision. I also told him he was a semester away from graduating. With that said, he was still adamant that, after the combine experience, a year off and regrouping would be the best thing. As always I support my players and their decisions."

RELATED Brad Ausmus away after news of mother's death

Lee posted career highs in averaging 6.4 points and 6.0 rebounds while recording 59 blocks and 11 assists as a junior last season. He also shot a team-best 68.0 percent from the floor and led the team with 216 total rebounds.

"I want to thank the University of Kentucky, the basketball staff and the Big Blue Nation for supporting me over the years," Lee said. "I'm sorry it took me so long to come to this decision, but I'm trying to do what's right for me and my family. I'll always think fondly of my time at Kentucky."

The 6-3 Briscoe was not invited to the draft combine and decided to withdraw before Wednesday's deadline.

"I really grew from this experience and I appreciate the opportunity to be evaluated by these NBA teams," Briscoe said in a statement. "I also want to thank the coaching staff and the fans for their support during this time. The NBA is my ultimate goal, so I'm returning to build on last year. There's no better place to grow as a player or to win a championship, and I want to do both."

Briscoe was viewed as a late pick in the second round at best by most analysts.

"Without his impact and competitive spirit, last year's team would not have been nearly as successful," Calipari said. "I fully expect him to come back and be a leader on and off the court for this young team. I'm excited to have him back."