By
Anthony, Andro, The Sports Xchange

Beltre could have been talking about the comeback the Rangers had in the seventh inning, when Ian Desmond capped a four-run frame with a three-run homer. He also could have been talking about the brawl that came a half-inning later that was highlighted by Texas second baseman Rougned Odor punching Toronto's Jose Bautista in the face and knocking both Bautista's batting helmet and sunglasses off.

The bottom line -- after a wild game in which both teams led, four coaches and three players were ejected and the benches cleared twice -- was that the Rangers won.

Texas is now six games over. 500 for the first time this season and obviously showed some fight.

"I think it was just two hard-nosed baseball teams that play the game hard," Texas manager Jeff Banister said. "They go at it hard. They like their club. We like our club. I take offense to everybody that thinks this is a game that shouldn't be played hard, that it shouldn't be played with emotion and intensity. We try to play hard. That's all I've got to say about that."

Toronto led 5-2 in the sixth inning after Bautista's three-run double keyed a four-run frame. The teams exchanged runs in their next at-bats before Texas scored four times in the bottom of the seventh to take the 7-6 lead.

Desmond's three-run homer off Jesse Chavez (0-1) that ended with a bat flip put Texas up and moved things to the top of the eighth for Matt Bush (1-0). Bush hit Bautista with the first pitch of the eighth. One out later Bautista slid hard into second base on a play that was ruled an illegal slide and resulted in an inning-ending double play. It was far from the end, though, as Bautista got up and was hit by Odor, which caused the benches to empty, setting off a fracas.

By the time order was restored both Bautista and Odor had been ejected along with Toronto's Josh Donaldson and Texas bench coach Steve Buechele. Toronto manager John Gibbons, who had already been ejected earlier in the game, came back onto the field for the fight.

"To me it was gutless," Gibbons said. "The other 29 teams, they come at you right away, but to wait until the end, it just sort of tells you something. I've been around this game a long time, like a lot of these guys, and it's sort of surprising. If what happened last year bothers you that much, you usually take it up."

Last season the Jays ended the Rangers season in the American League Division Series with a Bautista home run and bat flip that followed the signature moment of the series.

Bautista said he was surprised the Rangers threw at him and said the umpires should have handled the situation better after Bush hit him. He was also surprised Odor threw a punch.

"I mean, obviously, that's the only reason that he got me and he got me pretty good, so I have to give him that," Bautista said. "It takes a little bit bigger man to knock me down."

Odor was unavailable to the media after the game.

When the Rangers came up in the bottom of the eighth Sunday Chavez hit Prince Fielder with the first pitch and was ejected along with Toronto bench coach Demarlo Hale.

Despite the wildness, the Rangers were able to finish off the Jays with Bush picking up his first big-league win and Sam Dyson pitching a perfect ninth for his second save.

That's what the Rangers tried to focus on postgame.

"You don't want something like that to happen," said Beltre, who homered in the sixth to cut Toronto's lead to 5-3. "We just wanted to finish the game. It was a good win overall."

NOTES: Texas LHP Cesar Ramos started a four-game stretch in which the Rangers are slated to start left-handers in all four games. It would be the first time Texas has started four straight lefties since 1973. ... With his walk-off homer Saturday, Texas OF Drew Stubbs has hit 5.5 percent of his career homers in extra innings. That's the second-highest percentage among active players with at least 50 home runs. ... Texas C Bobby Wilson is the first player to have his first two homers of the year go for grand slams since Pittsburgh's Ike Davis in 2014. ... Toronto LHP Brett Cecil, who had some tightness in his left triceps, was put on the 15-day disabled list. He will undergo an MRI on Monday. The club called up RHP Dustin Antolin to take Cecil's roster spot. ... Toronto's bullpen leads the majors in losses with 12. ... The grand slam allowed by Toronto RHP Marco Estrada on Saturday snapped a streak of 40 1/3 innings without allowing a homer for the Blue Jays' staff. 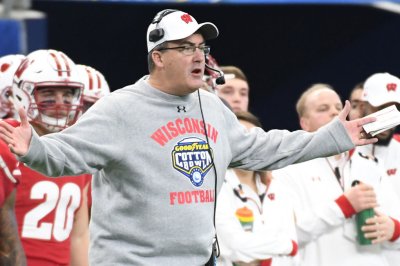