A dozen years after being the No. 1 overall pick of the 2004 draft, Matt Bush has reached the big leagues.

The Texas Rangers recalled the 30-year-old right-hander from Double-A Frisco on Friday, giving him the opportunity to shed the label of being one of the biggest busts in major league history.

Bush was in the bullpen Friday night seeking his major league debut in the Rangers' series opener against the Blue Jays.

Bush's career was presumed over when he spent 3 1/2 years in a Florida prison due to a drinking-fueled accident in which he nearly killed a motorcyclist.

Bush was released from prison in October and signed a minor league deal with Texas in December after displaying he could still throw a baseball nearly 100 miles per hour.

Bush was viewed as a phenom coming out of San Diego's Mission Bay High in 2004 and was the surprise No. 1 overall pick by the hometown Padres in a loaded draft that featured pitchers Jered Weaver and Justin Verlander and shortstop Stephen Drew.

Bush was forecast to be a shortstop for the Padres but he was arrested in a nightclub incident before even playing in a minor league game. There was later an arrest for a bizarre incident in which he assaulted two high school lacrosse players.

There were other incidents as well and he wasn't developing on the field, so eventually the Padres traded him to the Toronto Blue Jays shortly before the 2009 season.

Bush quickly wore his welcome out in Toronto as well and was released. He returned to San Diego and was arrested for throwing objects at cars at a shopping mall and crashed his vehicle, which led to a DUI charge.

Eventually, Tampa Bay gave him his "last chance" and that ended with the motorcycle incident.

Bush fared well at the Double-A level with the Rangers, going 0-2 with a 2.65 ERA with five saves. He has struck out 18 in 17 innings and allowed just nine hits and four walks.

During spring training, Bush relished getting another opportunity to play baseball and began to wonder what it would be like to reach the majors.

"I've always been gifted and blessed with a strong arm," Bush said. "It's a lot of fun for me seeing some of those big hitters swing and miss.

"I wonder what it would be like to throw in a regular-season game."

To open a roster spot for Bush, the Rangers optioned outfielder Delino DeShields to Triple-A Round Rock.

DeShields has batted .217 with two home runs and eight RBIs in 30 games for Texas this season, including a team-high 28 starts in center field. 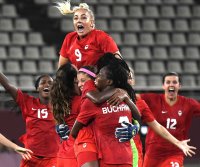