Ole Miss offensive tackle Laremy Tunsil poses with NFL Commissioner Roger Goodell after being selected by the Miami Dolphins with the 13th overall pick in the 2016 NFL Draft on April 28, 2016 in Chicago. Photo by Brian Kersey/UPI | License Photo

Mississippi officials have confirmed a text message conversation published on Laremy Tunsil's Instagram account during the NFL draft did occur last year but are still investigating whether the messages were altered, ESPN's Outside the Lines reported Thursday.

The firestorm erupted during the draft as Tunsil plummeted down the board and was finally selected 13th overall by the Miami Dolphins. The offensive tackle was forecast to go as high as No. 3.

Tunsil said on April 28 that he did receive money from an Ole Miss coach. He has refused to elaborate further. 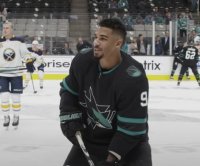 MLB // 11 hours ago
MLB playoffs: Schwarber slams Red Sox past Astros, to 2-1 ALCS lead
Oct. 19 (UPI) -- Kyle Schwarber's 430-foot grand slam was one of four Boston Red Sox homers in a blowout of the Houston Astros in Game 3 of the ALCS. The 12-3 triumph gave Boston a 2-1 lead in the best-of-seven series.

NBA // 18 hours ago
NBA projects $10 billion in revenue for 2021-22 season as audiences return
Oct. 18 (UPI) -- The NBA is projecting $10 billion in revenue for the upcoming 2021-22 season as audiences continue to return, a notable increase from the last two seasons when fan attendance was limited or disallowed due to COVID-19.