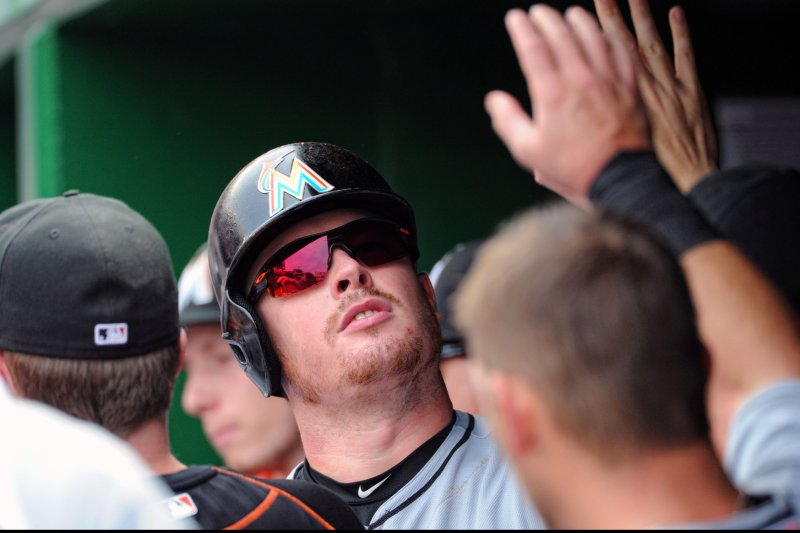 But the biggest strike of the night was delivered by his center fielder, Marcell Ozuna.

Chen got the win, and Justin Bour slugged a two-run homer to lead Miami to a 3-2 victory over the Milwaukee Brewers on Wednesday night at Marlins Park.

The Marlins led 3-0 in the seventh inning when Milwaukee scored twice. But the inning ended when Jonathan Villar was thrown out by Ozuna after trying to go from first to third with two outs.

"I was ready for anything because we had two outs," said Villar, who helped Milwaukee win Tuesday's game by stealing two bases. "If Ozuna throws a little to the side, I'm safe. He made a perfect throw.

Ozuna said he just threw the ball as hard as he could.

"(Villar) was going slow," Ozuna said, "and then he attacked."

Offensively for the Marlins, the big blow was delivered by Bour, who hit his fifth homer of the season, helping the Marlins (18-15) take two out of three games in their series against the Brewers (14-20). Miami has won 13 of its past 17 games.

Bour, who hit a 1-2 pitch, said it was motivating to him when cleanup hitter Giancarlo Stanton was walked ahead of him.

"I want to make sure I'm doing my job behind him, driving the ball so people don't think they can just put him on," Bour said. "I got down two strikes, hit a changeup, and it went out."

Two players extended their hitting streaks to 11 games -- Miami's Ozuna (1-for-3) and Milwaukee's Ryan Braun (3-for-4). They are tied for the longest active hit streaks in the majors.

However, Milwaukee's Aaron Hill, who went 0-for-4, had his 10-game hit streak halted.

He received relief help from A.J. Ramos, who pitched a scoreless ninth and earned his 10th save of the season. Ramos has converted 19 straight save chances dating to last season.

Anderson retired the first 10 Marlins before Martin Prado singled with one out in the fourth. Miami then broke through in the fifth on the two-run homer by Bour, who pulled that 80-mph changeup to right.

"I got (Christian) Yelich out on that pitch in the first inning," Anderson said. "I tried to do the same thing with Bour, but I left it up. Game of inches, right?"

Miami made it 3-0 later in the fifth inning. Ozuna hit a ground-rule double on a ball that got stuck underneath the fence in the right-field corner. He advanced to third on a wild pitch and scored on Adeiny Hechavarria's sacrifice fly.

Milwaukee scored twice in the seventh and just missed out on an even bigger inning. Alex Presley hit a one single, and pinch-hitter Colin Walsh walked, knocking Chen out of the game.

Braun made the score 3-2 with an RBI single to center, but that's when Villar was thrown out by Ozuna.

Brewers manager Craig Counsell wasn't too bothered by Villar's decision to run in that situation.

"It was an aggressive play," Counsell said. "Jon's going to force the action. (Tuesday night) it paid off."

Not this time, though.

NOTES: Miami designated LHP Craig Breslow for assignment and selected the contract of RHP Dustin McGowan from Triple-A New Orleans. Breslow's departure leaves Miami without a lefty in its bullpen. McGowan was 0-1 with a 3.38 ERA in six appearances for the Marlins earlier this season. In 7 1/3 scoreless innings at New Orleans, he was 2-for-2 in save chances, striking out seven and allowing six walks and just one hit. ... OF Austin Dean, one of Miami's top prospects, had two homers and five RBIs on Tuesday for Double-A Jacksonville. ... Brewers RF Domingo Santana (shoulder soreness) made his first start since May 3 and went 1-for-3 with a walk. ... Brewers 2B Scooter Gennett (oblique tightness), who has been on the disabled list since April 28, began a rehab assignment at Single-A Brevard County on Tuesday. He is expected to join the Brewers on Thursday when they open a seven-game homestand with a series against the San Diego Padres.

Sports News // 7 hours ago
French Open: Gauff advances, Djokovic vs. Nadal looms
May 27 (UPI) -- Cori "Coco" Gauff became one of three American women to advance to the fourth round of the French Open on Friday in Paris. Rafael Nadal and Novak Djokovic also won and remain on track for a premier quarterfinal matchup.

Sports News // 11 hours ago
French Open: Begu fined, not disqualified, for hitting boy with thrown racket
May 27 (UPI) -- Romanian Irina-Camelia Begu was fined $10,000, but not disqualified, for throwing her racket and hitting a boy in the stands during her second-round match at the 2022 French Open, tournament officials announced Friday.

MLB // 12 hours ago
MLB reprimands teams for 'unacceptable' accommodations for women employees
MIAMI, May 27 (UPI) -- Several MLB teams "fall embarrassingly below" standards, create an "untenable working environment for women" and deprive women of "equal access to participate" in the game, MLB said in a memo obtained Friday by UPI.

NHL // 14 hours ago
McDavid's OT winner guides Oilers by Flames for Stanley Cup semis spot
May 27 (UPI) -- Connor McDavid whipped a wrist shot by Jacob Markstrom 5:03 into overtime to lead the Edmonton Oilers past the Calgary Flames in Game 5 of their second-round playoff series and into the Western Conference finals.

MLB // 16 hours ago
Yankees, Rays use social media to share U.S. gun violence stats during game
May 27 (UPI) -- The New York Yankees and the Tampa Bay Rays collaborated during their game Thursday night to use their social media accounts to raise awareness about gun violence in the United States.