HOUSTON -- Perhaps the most foreboding reality facing the Houston Astros regarding how Seattle Mariners second baseman Robinson Cano has tortured them this season is the fact that 13 games remain in the season series.

Cano smacked his second home run of the game in the top of the 10th inning, the final salvo in the Seattle Mariners' wildly entertaining 3-2 victory over the Houston Astros on Saturday night at Minute Maid Park.

Cano drilled a 1-2 fastball the opposite way to left field off Astros left-hander Tony Sipp (0-2), his 11th homer pushing the Mariners back in front an inning after they blew a one-run lead in the Astros' final at-bat.

In six games against Houston this season, Cano is batting .500 (13-for-26) with one double, four runs scored, four home runs and 16 RBIs.

"(Sipp is) really tough. I was just looking for something up because I know he has a nasty split and a slider too. I wasn't looking for anything other than something over the plate."

After Cano gifted Seattle the lead with his season-high fourth hit, Cishek (2-1) worked the 10th and recorded the win.

The Mariners (18-12) managed at worst a split of the four-game series with Karns proving masterful before running into trouble in the sixth.

He allowed just three runners and recorded seven strikeouts before things got hairy with an RBI double by Astros left fielder Colby Rasmus.

Karns rallied to strike out Preston Tucker and Carlos Gomez to close the sixth with the tying run in the form of shortstop Carlos Correa on third. The Astros (11-20) pushed two more runners into scoring position in the seventh, but Seattle right-hander Nick Vincent recorded two groundouts to preserve the lead.

In the eighth, with Rasmus on second base, Joel Peralta got Gomez to pop out in foul territory.

Astros manager A.J. Hinch was ejected for the first time this season arguing balls and strikes with plate umpire Ben May in the eighth inning just prior to Rasmus' double. Gomez bizarrely earned an ejection from first base umpire Jeff Nelson as Houston took the field in the 10th.

"I just put my head down and didn't say a word and you're going to stare at me like that?" said Gomez, who was 0-for- 4 with two strikeouts.

"You want respect and don't respect me? He said, 'You have two seconds to bounce out of here.' And I just stayed. That's how everything started."

Astros left-hander Dallas Keuchel allowed three home runs to left-handed hitters last season. Kyle Seager and Cano nearly matched that total in the second and third innings, with Seager ricocheting a two-seam fastball off the foul pole in right field to give Seattle a 1-0 lead.

Cano followed with his two-out shot to right field in the third, drilling a slider into the right-field seats. Like Seager, Cano jumped on the first pitch from Keuchel, extending the Seattle lead to 2-0.

"Cano's Cano," said Keuchel, who allowed two runs on eight hits and one walk with eight strikeouts over seven innings. "It seems like him and Seager are riding that heat wave. I've had good success against those guys in the past, and it seems like I didn't make as quality of a pitch. Take out those two guys and it is a whole different ballgame."

NOTES: Astros 2B Jose Altuve was not in the starting lineup for the first time this season, a precaution to rest a sore left index finger. He suffered the injury diving for a grounder on Thursday night. Altuve finished 0-for- 4 on Friday but also worked a walk to extend his streak of reaching base safely to 21 home games. He pinch-ran in the seventh inning on Saturday and grounded out in his lone at-bat. ... Mariners RHP Taijuan Walker should be available to make his next scheduled start after departing early on Friday night with neck spasms. Walker woke up Friday morning experiencing discomfort and tried to rectify the issue with the Seattle training staff before his start. He was unable to turn to face the catcher and could not maintain his normal mechanics. He departed after just two innings. ... Astros LHP Tony Sipp returned from a one-game stint on the paternity list after the Friday morning birth of his daughter, Zoe Chanel Sipp. 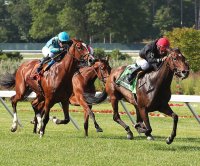