The Twins' offense didn't do much better against the Washington bullpen, which allowed no hits and rang up three more strikeouts as the Nationals beat the Twins 2-0.

"The earlier I get contact and put the ball in play the better it is, but it was a heckuva game today," Roark said.

Has the right-hander ever felt so sharp?

"Don't think I ever have. I was throwing four pitches to lefties and righties. Keeping them guessing, uncomfortable at the plate," Roark said.

"I watched how they were aggressive and when you have a team like that you have to execute early."

The Washington franchise, which began in 2005, set a record with 18 strikeouts -- besting the mark of 17 set by Max Scherzer when he threw a no-hitter last October against the Mets in New York.

"He has not pitched poorly but he hasn't pitched great until today," Twins manager Paul Molitor said of Roark. "He stepped up for them. Partly him, partly us. That (15) is a big number."

Roark's previous best was 11 strikeouts at San Diego in 2014. That year he won 15 games as a starter but was used mostly out of the bullpen in 2015 after the Nationals acquired free agent Scherzer.

For the second straight game, the Nationals jumped on the Twins in the first inning as Ryan Zimmerman had a two-run single to center to make it 2-0 against starter Phil Hughes. The hit by Zimmerman scored Anthony Rendon, who had singled, and Bryce Harper, who had doubled.

Roark (2-2) allowed no runs and two hits. Hughes (1-3) gave up two runs and six hits in seven innings before he was lifted for a pinch hitter in the eighth.

"It was frustrating because Phil settled down," Molitor said of Hughes. "He was aggressive, especially inside."

Reliever Blake Treinen got one out in the eighth and Oliver Perez got two for the Nationals, and closer Jonathan Papelbon tossed the ninth for his seventh save.

Roark entered the game with a lifetime mark of 27-20 with an ERA of 3.15 in 88 games, with 51 starts. It was his first appearance against the Twins, and Roark improved to 4-4 in interleague contests in 12 games, with nine starts.

"We couldn't get to him," Twins shortstop Eduardo Escobar said through a translator. "We saw him in spring training. But spring training is not the same as the regular season."

Harper had two doubles for the Nationals and Zimmerman had two singles. Joe Maurer had the first hit for the Twins, a single in the first. Rookie Max Kepler, in his second big league start, had a double in the second for Minnesota. That was the last hit off Roark.

NOTES: Washington RHP Stephen Strasburg (3-0, 1.25 ERA) will face Twins RHP Tyler Duffey (season debut) in the series finale Sunday. ... Ervin Santana (0-1, 3.15 ERA) was slated to pitch Sunday for the Twins but he has been scratched due to a sore lower back, assistant general manager Rob Antony said Saturday. Antony said Santana tweaked his back during batting practice Friday and is not slated to go on the disabled list. Duffey was scheduled to start Saturday for Triple-A Rochester. ... The Washington Senators played in the nation's capital from 1901 to 1961 before moving to Minnesota and becoming the Twins. ... Washington 2B Daniel Murphy entered Saturday with a batting average of .411 and a home average of .545 -- both led the National League. He was not in the starting lineup as he got the day off. ... Twins OF/INF Miguel Sano came into Saturday's game with two homers in his last two games and three in the last five days. He made his first start of the season at third base Saturday. ... Washington C Wilson Ramos, who got the start Saturday, was traded by the Twins to the Nationals in 2010 for pitcher Matt Capps.

NFL // 56 minutes ago
Chiefs defense sparks win over Broncos
Dec. 6 (UPI) -- The Kansas City Chiefs defense forced three turnovers, including an interception returned for a touchdown, to spark a 22-9 win over the Denver Broncos. The win helped the Chiefs hang on to first place in the AFC West. 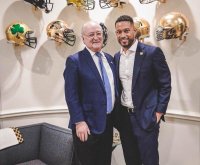