PHILADELPHIA -- After a slow start, the New York Mets have begun to hit. And their new second baseman has joined right in.

Neil Walker, acquired from Pittsburgh in an offseason trade, hit two of the Mets' six home runs as they battered the Philadelphia Phillies 11-1 Tuesday night.

Especially when a lineup is stocked with long-ball threats, as is the case with the Mets.

"It's kind of the way our club's been built," manager Terry Collins said. "We've got a lot of guys who can hit it over the fence. There's no easy guy in that lineup."

Both of Walker's homers were solo shots off Philadelphia reliever Brett Oberholtzer.

It was the fourth multi-homer game of Walker's career, and his first since July 1, 2015, when he hit two at Detroit. He also homered in Monday's victory over the Phillies, and now has six this season.

Walker, whose career high of 23 came in 2014, is the first Mets second baseman to hit six or more home runs in the month of April since Jeff Kent hit eight in April 1994.

Yoenis Cespedes hit a three-run homer and Michael Conforto, Lucas Duda and Curtis Granderson added two-run shots for New York, which won for the fifth time in six games to improve to 7-6.

The home run total fell one short of the club's single-game record, set exactly 11 years ago, on April 19, 2005, in Philadelphia's Citizens Bank Park.

The run total was a season high for the Mets, who have scored 33 over their last five games. They managed just 20 in their first eight.

"Incredible at-bats by the whole team," Conforto said. "Hitting is contagious. You get energy in the dugout, see excitement and guys want to join the party."

Logan Verrett, making his second start in place of Jacob deGrom, pitched six shutout innings to earn the victory. Verrett (1-0) struck out four and walked one.

The Phillies, who lost for the fourth time in five games, scored their only run on Ryan Howard's RBI single in the eighth inning. The next hitter, Maikel Franco, was robbed of a three-run homer by New York outfielder Juan Lagares, who made a leaping catch at the center-field fence.

Phillies starter Vince Velasquez, who had not allowed a run while winning his first two starts, was chased after surrendering five runs (two earned) and five hits over 4 1/3 innings. Velasquez (2-1) struck out four without allowing a walk.

Conforto and Cespedes each homered on 0-2 breaking balls from Velasquez in the first and third, respectively.

Conforto, elevated from seventh to third in the Mets' order five games ago, hit his second homer of the season after David Wright doubled with one out for a 2-0 lead.

Cespedes launched his fourth of the year into the left-field seats. Verrett reached on an error to start the inning and two outs later Conforto singled. Cespedes then made it 5-0.

"Two pitches impacted the whole game," Velasquez said. "I could have located better. Just bad execution. On those two pitches, you've got to finish the at-bat."

Walker gave New York a 6-0 bulge with his first homer off Oberholtzer.

One inning later, Walker followed Duda's two-run blast with another solo shot, putting the Mets up 9-0.

NOTES: Phillies 2B Andres Blanco started for just the fourth time this season and hit in the No. 3 spot in the lineup for the first time. "He's swinging the bat as well, if not better, than anybody we've got," manager Pete Mackanin said of Blanco, who brought a .286 average into the game, "so I just thought, put him in there and see if he can jump-start the offense a little bit." Blanco went 2-for-3, but his base-running error short-circuited a first-inning threat. ... Mets RHP Noah Syndergaard had eight strikeouts in Monday's win over the Phillies and has racked up 29 through three starts, most in the majors and the second most in team history during a similar span. RHP Pedro Martinez struck out 30 batters through his first three outings in 2005. Syndergaard is also eighth in the majors in ERA (0.90). ... The Mets announced before the game that RHP Jacob deGrom threw 71 pitches in a simulated game Tuesday in Florida and will start Sunday against the Braves in Atlanta. DeGrom made one start this season before he was sidelined by tightness in his right lat. He was subsequently given family emergency leave when his newborn son experienced undisclosed health complications. His son was released from a Florida hospital Monday. 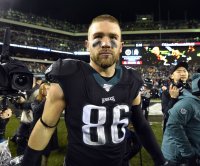