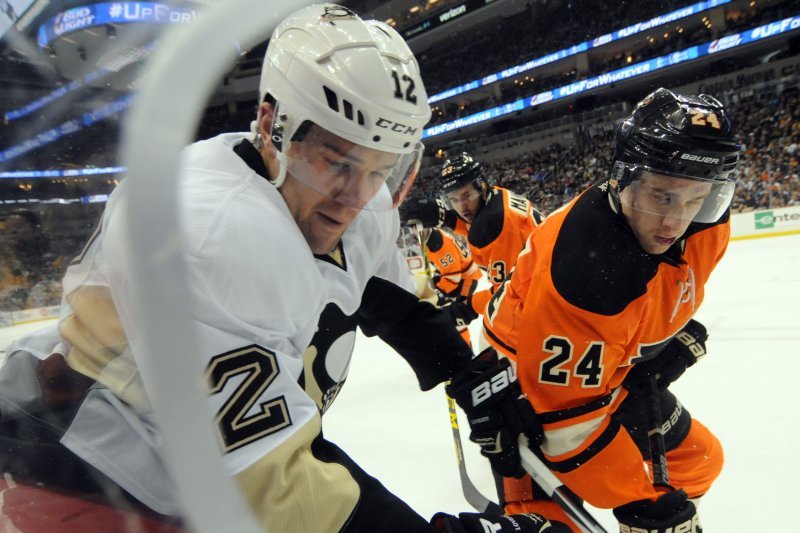 Pittsburgh Penguins defenseman Ben Lovejoy (12) and Philadelphia Flyers right wing Matt Read (24) battle for the puck around the boards during the second period of the Pittsburgh Penguins 6-2 win against the Flyers at the Consol Energy Center in Pittsburgh on April 3, 2016. Photo by Archie Carpenter/UPI | License Photo

Pittsburgh Penguins center Sidney Crosby (87) smiles as he joins in the celebration of Pittsburgh Penguins right wing Patric Hornqvist goal the against the Philadelphia Flyers in the second period at the Consol Energy Center in Pittsburgh on April 3, 2016. Photo by Archie Carpenter/UPI | License Photo

Pittsburgh Penguins center Sidney Crosby (87) smiles as he joins in the celebration of Pittsburgh Penguins right wing Patric Hornqvist goal the against the Philadelphia Flyers in the second period at the Consol Energy Center in Pittsburgh on April 3, 2016. Photo by Archie Carpenter/UPI | License Photo

PITTSBURGH -- Early playoff exits are common for the Pittsburgh Penguins since they last won the Stanley Cup in 2009. This team is showing signs it won't be an easy out this April -- or maybe even later.

Rookie backup goalie Matt Murray made 28 saves to win for the second day in a row, Sidney Crosby scored yet another goal against Philadelphia and the Penguins remained the NHL's hottest team, defeating the Flyers 6-2 Sunday.

The Penguins, already assured of making the playoffs, won a season-high-tying sixth game in a row and 12th in 13 games and cooled off the Flyers, who were on a 13-3-2 surge.

"There's still a lot to play for, and I like the way this group is playing right now," said Pittsburgh coach Mike Sullivan, who is 31-15-5 since taking over in December. "What we've accomplished is the opportunity to compete for everybody's ultimate goal. It's given us a ticket to the dance, and there's a lot of hockey to be played."

The Penguins, who have advanced to the Eastern Conference finals only once since a young Sidney Crosby and Evgeni Malkin led that 2009 Cup run, hope they are one of those teams with a lot yet to play for.

"They're flying by you, and they play very good defensively," Flyers right wing Jakub Voracek said of a Penguins team that is 3-0 against Philadelphia after being 0-4 last season. "Since the beginning of the season, they've (improved) their defensive system and you can tell (the difference)."

Eric Fehr scored the final two goals with Pittsburgh up big in the third period, and Beau Bennett, Patric Hornqvist and Carl Hagelin also found the net against Philadelphia goalie Steve Mason as the Penguins got at least one goal from each of their four lines. They have scored 31 goals during their six-game run.

"Everyone is playing the right way, no matter who's out there," Crosby said. "You can look at how many goals we score, but we're doing a good job defensively, which allows us to do that."

Winning their third in a row against the Flyers after dropping eight straight to them, the Penguins reached the 100-point mark for the 10th time in franchise history. They also opened up a five-point edge over the New York Rangers for the Metropolitan Division's No. 2 playoff position and home ice in the first round of the playoffs.

"(I'm) happy with the progress, but we're by no means satisfied," Sullivan said. "I still believe we have another level with this team, and we're going to push our guys to get there."

The Flyers, previously 10-2-1 at Consol Energy Center, failed to win their fourth in a row and stayed two points behind the idle New York Islanders in the race for the conference's top wild-card spot.

Murray, coming off his first career shutout Saturday against the Islanders, was solid in winning his fifth in a row and improving to 7-2-1 as a rookie, although Wayne Simmonds ended his 122:05 scoreless streak by scoring in the final minute of the second period. Voracek also scored for Philadelphia.

"You can dwell on what you did quickly, and then move on quickly, and that's what we're going to have to do," said Simmonds, who netted his 29th goal.

Crosby, who torments the Flyers like no other NHL player, got it going with his first goal in four games -- and his first power-play goal in 30 games.

With Simmonds off for hooking Crosby, Phil Kessel threw the puck on net and Crosby backhanded it past Mason, who came into the game on a 9-2-2 run. It was Crosby's 33rd goal in 55 career games against Philadelphia, and his 33rd of the season.

But while Crosby was the NHL's player of the month in March, a player largely missing from the Penguins' lineup for months -- Bennett -- made it 2-0 only 1:05 later in the first.

Bennett, limited by two long injury layoffs to 32 games, beat Mason in close with a wrist shot at 16:43 of the first -- his first goal since he scored both Penguins' goals in a 2-0 win at Colorado on Dec. 9, and his sixth of the season.

Hornqvist scored for the third consecutive game midway through the second period, his ninth goal in 19 games and 21st overall. Fehr later scored his seventh and eighth goals.

NOTES: The Pittsburgh Penguins played their final home game of the regular season. They finish with games at the Senators, Capitals and Flyers. ... Penguins C Evgeni Malkin, still out indefinitely, missed a 12th consecutive game with an upper-body injury. ... Penguins rookie G Matt Murray started for the second day in a row because G Marc-Andre Fleury is out indefinitely with his second concussion of the season. ... Similarly, Flyers G Steve Mason also played for a second successive day and the eighth time in 15 days because of backup G Michal Neuvirth's lower-body injury. ... By making the playoffs, the Penguins will send their first-round draft pick to Toronto as part of the Phil Kessel trade. The Penguins get back the second-round pick sent to the Maple Leafs last year as part of the Daniel Winnik trade. The Maple Leafs currently have two picks in each of the first four rounds. ... The Flyers scratched C Jordan Weal, C R.J. Umberger, LW Scott Laughton, D Evgeny Medvedev, G Ray Emery and Neuvirth. The Penguins held out D Derrick Pouliot, and the injured Fleury, D Olli Maatta and RW Bryan Rust.