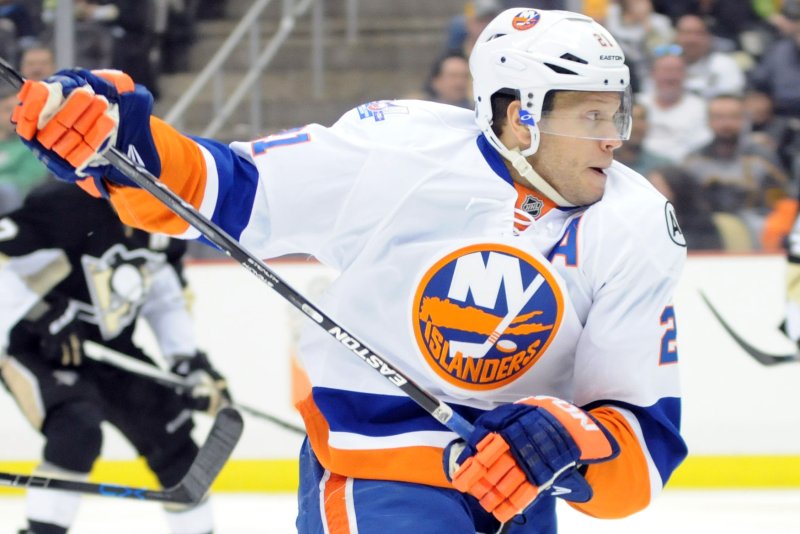 Pittsburgh Penguins goalie Marc-Andre Fleury (29) makes a glove save during the third period of the 2-1 overtime shoot-out win against the New York Islanders at the Consol Energy Center in Pittsburgh on March 15, 2016. Photo by Archie Carpenter/UPI | License Photo

Letang, playing nearly four minutes longer than any other player on either team, was the only successful shooter in the shootout, and the Penguins overcame Berube's strong play to beat the Islanders 2-1 on Tuesday night.

Winger Chris Kunitz scored the only Penguins' goal in regulation while Kyle Okposo answered for the Islanders.

Berube made 33 saves in only his third career NHL start, and just his second since Oct. 10, but was beaten by Letang on a backhander in the shootout.

"I saw him really far out (of the net), and I thought if I could go around him and get the puck up, it would be good," Letang said. "Toward the end of the year, it's going to be like that, one-goal games. Goalies are going to get hot."

Penguins goalie Marc-Andre Fleury made 25 saves and stopped Frans Nielsen, Okposo and John Tavares in the shootout to gain the extra point for Pittsburgh, which currently owns the Eastern Conference first wild card spot. The Penguins trail the Metropolitan Division No. 3 Islanders by four points.

"These are important points for both teams, and from that standpoint it was like a playoff game," Penguins coach Mike Sullivan said.

So was the goaltending.

Berube was exceptional during an overtime played almost exclusively in the Islanders' end until Tavares almost won it with two seconds remaining. Berube made seven saves in the five-minute overtime, one more than he made in the entire third period.

"It was a long five minutes. I wasn't even looking at the clock. I didn't have time," said Berube, a former Los Angeles Kings prospect who played in only his fourth NHL game.

Berube stopped Sidney Crosby and Phil Kessel in the shootout, but Letang -- despite being clearly tired -- flipped a backhander under the crossbar. Letang played 31:52, or six more minutes than any other Penguins player.

"He's the one guy on our team who can really handle minutes," Sullivan said. "(When you) look down the bench to put guys in the game, he gets tapped a lot. ... When that happens, those minutes add up fast."

Fleury was working on his sixth shutout of the season when Okposo scored on a power play at 14:35 of the third to tie it 1-1, but still gained his 30th win -- his eighth such NHL season.

With Penguins ace penalty-killer Nick Bonino off for slashing, Anders Lee kicked the puck to Okposo near the right post, and Okposo shifted from his backhand to his forehand to lift it over a prone Fleury for his 19th goal.

It was the second night in a row the Islanders rallied in the third, as they came back from a 2-0 deficit in the final period to beat the Florida Panthers 3-2 on Monday night.

"Hopefully, he can build off this," Capuano said. "It's tough to win on the road, and to come in here on a back-to-back, I'm extremely pleased with the effort."

With the Islanders playing a back-to-back, Berube was given only his second start since Oct. 10 and excelled, holding off several Penguins' flurries during a scoreless but busy second period in which he made 11 saves.

Defenseman Brian Dumoulin, without a goal all season, put a wrist shot on net that Kunitz tipped perfectly, causing the puck to deflect under the crossbar and past Berube.

Crosby picked up the second assist, giving him 14 points during a nine-game scoring streak.

"But we took our foot off the ice (after that)," Kunitz said. "We started turning pucks over and didn't capitalize on them playing back to back."

Despite playing left wing on Crosby's line, the goal was only the second in eight games for Kunitz and his third in 13 games.

NOTES: With G Jaroslav Havak (groin) out for the rest of the season, G Jean-Francois Berube got the start. Berube is backing up G Thomas Greiss, who was in net for a 3-2 win over the Florida Panthers on Monday. ... Islanders LW Mikhail Grabovski returned from a 10-game upper-body injury layoff and went on the top line with C John Tavares and RW Kyle Okposo. RW Steve Bernier was inserted onto the third line, and D Brian Strait was paired with D Thomas Hickey. LW Brock Nelson got the night off after playing in 202 consecutive games... Penguins LW Scott Wilson remained out with an injury sustained Friday at Columbus. ... Penguins D Ben Lovejoy missed his 12th consecutive game with an upper-body injury, even though coach Mike Sullivan said he is essentially ready to return. ... The Islanders scratched D Ryan Pulock, C Shane Prince, D Marek Zidlicky, LW Eric Boulton, Nelson and Halak. The Penguins held out Wilson, Lovejoy, C Evgeni Malkin, G Jeff Zatkoff and D Derrick Pouliot. The Penguins are 7-4-1 this season without the injured Malkin.