New York Mets' Jenrry Mejia claims MLB out to get him

New York Mets relief pitcher Jenrry Mejia celebrates after closing the ninth inning of the 5-3 win over the Pittsburgh Pirates with New York Mets third base coach Tim Teufel (18) at PNC Park in Pittsburgh, on June 28, 2014. The Pirates wore uniforms honoring the Crawford Grays and the Mets donned the uniform of the Royal Blues. UPI/Archie Carpenter | License Photo

New York Mets relief pitcher Jenrry Mejia, who became the first player to be permanently suspended for failing three tests for performance-enhancing substances, claims Major League Baseball was out to get him.

Mejia, 26, told The New York Times that he was a victim of a witch hunt with his lifetime ban by the league and faulted the players' union for not finding grounds to appeal.

In February, Mejia tested positive for Boldenone, an anabolic steroid -- his third positive PED test in less than one year, which under league rules calls for a permanent ban.

Mejia, in a Thursday interview with the Times speaking through an interpreter, said he was only guilty of the first offense. Mejia said the second positive test wasn't accurate and, after its results were announced, MLB officials pressured him to share information about his doping connections.

Mejia told the Times that MLB officials said if he appealed the results of the second test, "They will find a way to find a third positive."

MLB spokesman Pat Courtney denied the charge, telling the Times, "No one at MLB or representing MLB has met with Mejia regarding any of these drug violations."

Mejia said he asked the players' union for help.

"They should have found something to appeal for," Mejia told the newspaper.

Mejia said he doesn't have any regrets about his decisions.

"All you have to do is admit your guilt when you are guilty. And stay positive when you're not."

Mejia also is prohibited from playing minor league baseball and with concurrent pro leagues in other countries, including Japan, South Korea and Mexico. Independent leagues and winter leagues can choose whether to enforce MLB suspensions, including Mejia's winter league team in the Dominican Republic.

Under the PED testing rules, Mejia can apply for reinstatement in one year to commissioner Rob Manfred. Rules mandate he must sit out a minimum of two seasons before he could be reinstated to pitch in the majors. 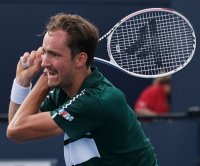