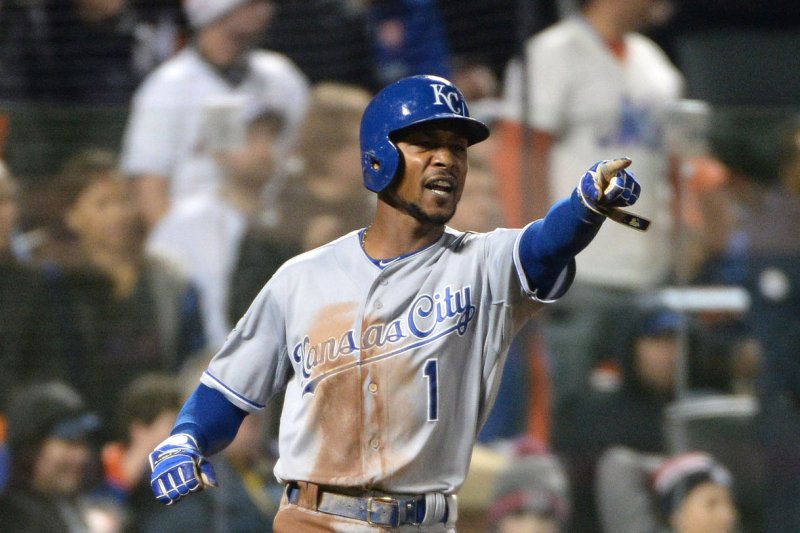 Kansas City Royals' Jarrod Dyson celebrates after scoring off of a Christian Colon RBI single against the New York Mets in the twelfth inning of game 5 of the World Series at Citi Field in New York City on November 2, 2015. Photo by Pat Benic/UPI | License Photo

Kansas City Royals starting right fielder Jarrod Dyson will be out six weeks because of a Grade 2 oblique strain.

Dyson, expected to platoon in right field with Paulo Orlando, pulled up lame taking a swing in his first at-bat in Cactus League play on Wednesday. He slowly wandered to first base and was removed after the inning.

Alex Rios, who started in right field last season, was not re-signed.

Former first-round pick Bubba Starling could be in line for more playing time, but he's not alone because of a surplus of young outfielders for the Royals. Starling, 23, was a top high school recruit in baseball and football and was ready to head to Nebraska to play football before the Royals made the Gardner, Kan., native a first-round draft pick.

MLB // 9 hours ago
Yankees make history with triple play vs. Blue Jays
June 18 (UPI) -- The New York Yankees completed their second triple play of the season in a win over the Toronto Blue Jays. The triple play was the first in MLB history completed in the order of position numbers 1-3-6-2-5-6.

MLB // 9 hours ago
Indians smack four homers in win over Orioles
June 18 (UPI) -- The Cleveland Indians pounced all over the Baltimore Orioles pitching staff in their latest victory, with four players homering to cap off a four-game sweep in Cleveland.

Sports News // 13 hours ago
Love, Palace Pier, Poetic Flair, Subjectivist star in early Royal Ascot action
June 18 (UPI) -- Another spectacular Royal Ascot carries the horse racing world through a week that will help set the agenda for a lot of future events from Europe to California and likely to Australia.