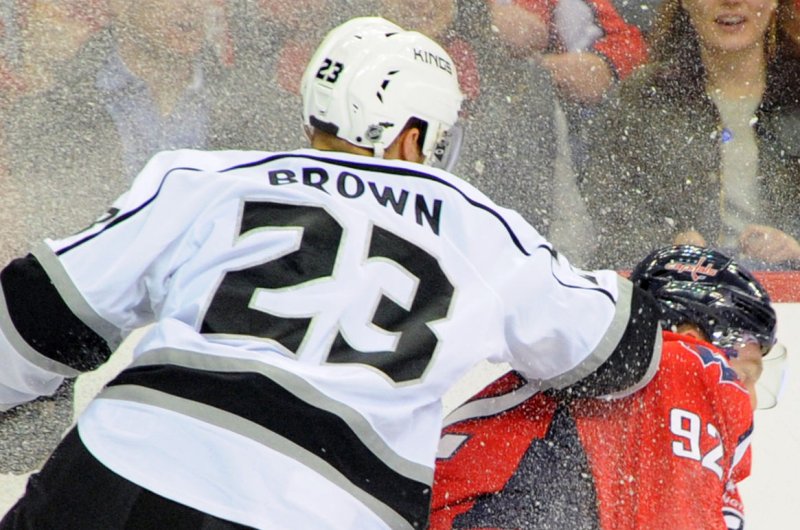 WASHINGTON -- The Los Angeles Kings were the beneficiary of countless clutch plays by winger Justin Williams during his seven seasons with the team.

Tuesday night they were on the other side.

Williams assisted on Evgeny Kuznetsov's game-winner with 2:02 left, Philipp Grubauer made 39 saves and the Washington Capitals defeated the Kings 3-1.

"He finds a way to get things done. That's his talent, the intangible," Capitals head coach Barry Trotz said of Williams. "You can't put an analytics stat on what he seems to be able to do...He has great timing and a great sense of gamesmanship."

The winger controlled a loose puck, skated behind the net and fed Kuznetsov near the post and he fired in behind Kings goalie Jonathan Quick for his 16th goal.

"I just tried to get it over there as quick as possible and give him an empty net, because he gave me one earlier that I couldn't convert on," Williams said.

Left winger Andre Burakovsky had a goal and an assist, and left winger Jason Chimera (empty netter) also scored for Washington (41-10-4), which is 15-1-1 in its last 17 at home.

"I love tight-checking games, I love when both teams are competing at a high level, and I love when we win," Williams said after he and center Mike Richards played their first game against the Kings, a team they helped to win two Stanley Cups.

The 34-year-old Williams signed with the Capitals in July as an unrestricted free agent, while Richards, 31, saw his Kings' contract terminated last summer due to a combination of limited production and an arrest at the Canadian border for possession of a controlled substance.

Center Anze Kopitar scored for Los Angeles (33-20-4), and Quick, back after missing three games with a lower-body injury, made 29 saves. The Kings fell to 2-3 on their seven-game road trip after dropping a match-up of division leaders who could meet again in the spring.

"Two really good teams. Both goalies made some big saves," Kings head coach Daryl Sutter said. "We couldn't get that second one."

A penalty-filled first period resulted in five power plays, but only one goal.

Late in the period, with Washington enjoying its third man advantage, Kings' defenseman Drew Doughty broke up a two-on-one chance when he dove and poked away a pass, starting a Los Angeles rush.

At the other end, Kopitar took a pass from right winger Dustin Brown and fired on net. Grubauer made the first save, but Kopitar controlled the rebound and fired it in for his 17th of the season with 3:17 left.

Los Angeles was blanked from then on and has scored two goals or less in its last three losses.

"What it comes down to is we've got to bear down and put pucks in the net," Doughty said. "We've been struggling to score lately and it's been hurting us. I think we wasted our goals in the (9-2) Boston (win that started the road trip)."

The Kings outshot the Capitals 19-11 in the second period, but Grubauer held them at bay.

"I thought he was rock solid," Trotz said. "He looked really, really confident and he was seeing things in slow motion."

Burakovsky got the equalizer with 49 seconds left in the period from the slot when he redirected a pass from defensemen Dmitri Orlov past Quick for his 12th of the season.

NOTES: Washington D Brooks Orpik (lower-body injury) returned after missing 40 games. He played 16:43, assisted on Washington's first goal, and registered five hits. D Taylor Chorney and RW Stanislav Galiev were scratched. ... D Jamie McBain, C Andy Andreoff and G Peter Budaj were the Kings' scratches. ... The game paired the NHL's top two power-play units in the Capitals (24.4 percent) and the Kings (23.1 percent). ... Los Angeles penalty killers had allowed a power-play goal in each of their last five games prior to Tuesday. ... Washington RW Justin Williams had 103 goals and 163 assists with the Kings from 2008-15, while C Mike Richards totaled 46 goals and 87 assists from 2011-15. ... The teams' other regular-season meeting is March 9 in Los Angeles.

Sports News // 13 hours ago
Viktor Hovland withdraws from U.S. Open after sand causes eye injury
June 18 (UPI) -- Norway's Viktor Hovland was forced to pull out of the U.S. Open golf tournament Friday after sand got in his eye and caused severe irritation.