Cam Newton talks about being a 'sore loser'

Cam Newton wasn't apologizing Tuesday for walking out on reporters after the Carolina Panthers' loss in the Super Bowl 50.

Newton acknowledged that he was a "sore loser" after the Panthers fell to the Denver Broncos 24-10 on Sunday night in Santa Clara, Calif. He answered only a few questions from the media before walking out.

"I've been on record to say I'm a sore loser. Who likes to lose? You show me a good loser and I'm going to show you a loser," he said. "It's not a popularity contest. I'm here to win football games."

The 2015 NFL Most Valuable Player spoke to reporters on Tuesday in Charlotte, N.C., while cleaning out his locker. He said "that's cool" if he offended anyone with his actions.

Speaking with the media is optional on exit day at the end of the season, but Newton wanted to address the criticism directed at him since then.

"Obviously, somebody had a great conversation with him and explained it to him and he was able to compose himself and speak to you folks," Rivera said. "That's huge. What he did today was a part of his growth. He is still growing and maturing as a man in this world."

RELATED Even for elite QBs like Cam Newton, returning to Super Bowl not easy

Newton's teammates also supported him in the locker room, shouting "We love you."

Newton promised to help the Panthers return to the Super Bowl.

"I've got no more tears to cry," he said. "At the end of the day, when you invest so much time and sacrifice so much and things don't go as planned, the emotions take over. That's what happens. 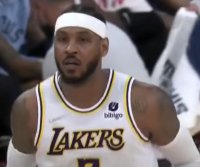 NFL // 18 hours ago
Jets QB Zach Wilson leaves Week 7 game with knee injury
Oct. 24 (UPI) -- Rookie quarterback Zach Wilson sustained a right knee injury in the second quarter of the New York Jets' loss to the New England Patriots on Sunday in Foxborough, Mass., and did not return to the game.

Soccer // 20 hours ago
Soccer: Real Madrid beats Barcelona in El Clasico
Oct. 24 (UPI) -- David Alaba and Lucas Vazquez each scored to lead Real Madrid to a 2-1 win over rival Barcelona in the first edition of El Clasico of the 2021-22 season Sunday in Barcelona, Spain. 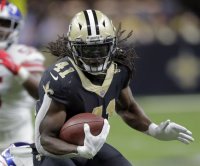