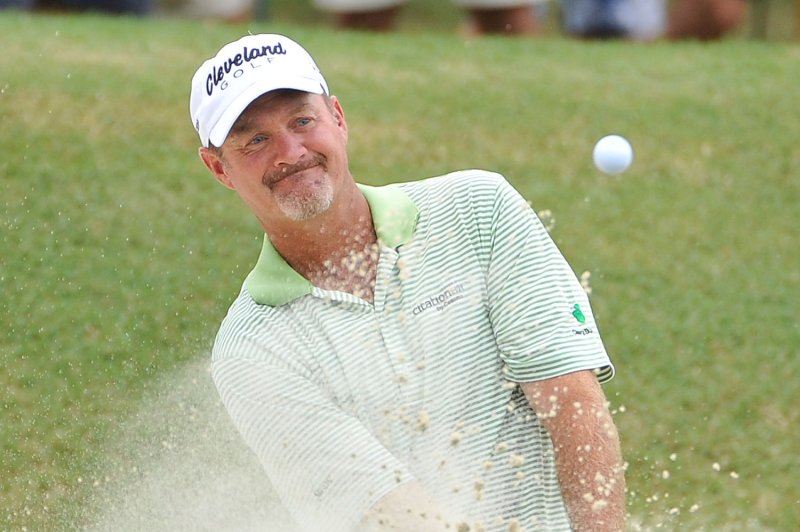 Jerry Kelly, who will qualify to play on the Champions Tour later this year, is tied for the lead after the first round of the PGA Tour's CareerBuilder Challenge on Thursday in La Quinta, Calif.

Kelly, 49, fired an 8-under-par 64 at La Quinta Country Club, one of three courses in the rotation for the Coachella Valley tournament that was long known as the Bob Hope Classic.

India's Anirban Lahiri also shot a 64 at La Quinta, while Jason Dufner and Jeff Overton each carded 8-under 64s at the Nicklaus Tournament Course at PGA West.

Four players sharing the tournament's first-round lead is the highest total since five opened at 7-under 65 in 2008.

"We rarely play this golf course with no wind," said Kelly, whose best result in 18 previous entries in the tournament was fifth place in 2002. "The new ones (in the tournament rotation) are a little longer. I figured I needed to get out there and get it while I could and see if I could keep a roll going on the tougher ones. ...

"There were still some long holes out here. In the past, this has been the tough golf course, so it was strange just how the mindset changes when this becomes the so-called easier one and you have to get it. I was able to get it. But normally, this is the toughest one in the rotation. It's just strange."

RELATED Maria Sharapova advances to fourth round of Australian Open

Colt Knost shot a 65 at the Nicklaus Tournament Course, and he shared fifth place with Jamie Lovemark, who had a 65 at La Quinta.

Canada's Adam Hadwin posted the best score of the day at PGA West's TPC Stadium Course, a 6-under 66 that leaves him tied for seventh with 10 other players.

Sports News // 2 days ago
Cold weather, short field produce bumps in Road to the Kentucky Derby
Feb. 3 (UPI) -- In what would normally be a hot weekend of Kentucky Derby prep action, one of the big three races was postponed by bitter cold and another drew only four entries -- all from the same trainer.

Sports News // 2 days ago
Pickleball's on a roll: TV time, young players, Olympic aspirations
MIAMI, Feb. 3 (UPI) -- Pickleball, a once lesser-known game, is now America's fastest-growing sport. Those closest to the sport say the pandemic, celebrity investors and increased exposure are behind its popularity.

NBA // 3 days ago
LeBron James likely to set NBA scoring record vs. Thunder or Bucks
Feb. 2 (UPI) -- LeBron James, who is 89 points away from passing Kareem Abdul-Jabbar to become the NBA's all-time leading scorer, should reach that mark within his next four games, according to his statistical averages and oddsmakers.

NFL // 3 days ago
49ers 'content' with QBs Purdy, Lance; won't re-sign Garoppolo, coach says
Feb. 2 (UPI) -- The San Francisco 49ers are "content" with Brock Purdy and Trey Lance as the top quarterbacks on their roster and will not bring back Jimmy Garoppolo next season, coach Kyle Shanahan told reporters.
Advertisement