FOXBOROUGH, Mass. -- Regardless of who the New England Patriots play in next Sunday's AFC championship game, Tom Brady knows how special it is for his team to be there for the fifth straight time.

"It's pretty cool, pretty cool -- it's hard to do man," Brady said after leading his defending champions to a 27-20 victory over the Kansas City Chiefs in Saturday's divisional playoff.

"You gotta grind throughout the entire year," Brady said. "There's only four teams playing next weekend and we're one of them."

The Patriots were back to being healthy again on Saturday, with wide receiver Julian Edelman returning from his broken left foot, left tackle Sebastian Vollmer coming back from an ankle sprain, and tight end Rob Gronkowski able to play after being questionable and missing practices leading up to the game.

Brady, seeking his seventh Super Bowl trip and fifth title, threw for 302 yards and two touchdowns and ran for another score -- and he and his mates wait to see who they'll play.

If Denver beats Pittsburgh Sunday, the Patriots visit the Broncos. If the Steelers win, New England is home.

"You're not rooting too hard -- whatever happens happens," Brady said. "Whether we play here or whether we play there, we're going to have to play really well."

Said coach Bill Belichick: "We'll look forward to whoever that opponent is."

The Patriots opened the season with a home win over Pittsburgh and lost in overtime at Denver.

RELATED New England Patriots-Kansas City Chiefs: Keys to game and who will win

There was a report after the game that Edelman was headed for x-rays, but that may have just been to check on the condition of his foot after the game.

Brady joined Kenny Stabler of the Oakland Raiders (1973-77) as the only quarterbacks in NFL history to take their teams to five consecutive conference championship games.

Brady directed an offense that was almost exclusively passing and put an end to the Chiefs' 11-game winning streak.

Kansas City came into the game off a 30-0 shellacking of the Houston Texans last week, the Chiefs' first playoff victory in 21 years.

Kansas City made the game closer on one-yard touchdown run by Charcandrick West with 1:13 left. Kicker Cairo Santos popped an onside kick into the air, right to Gronkowski -- and a double deflection became Edelman's 10th catch, putting an end to the game.

Brady, who extended his NFL record to 17 games with multitouchdown passes, also scored on a sneak to give the Patriots a 14-3 lead with 5:36 left in the first half.

That came one play after he ran 10 yards down to the one-foot line. It was the sixth rushing touchdown of Brady's postseason career, second all-time on the New England list. He is also tied for second among all NFL quarterbacks in postseason rushing scores.

Gronkowski, who missed practice Thursday and Friday because of back and knee issues, scored on catches of eight and 16 yards, the seventh and eighth postseason touchdown catches of his NFL career.

Gronkowski set the franchise and the league records for playoff touchdown passes by a tight end. He caught seven passes for 83 yards.

Brady, looking for his seventh conference title, completed 28 of 42 passes for the 302 yards, tying Peyton Manning with his ninth 300-yard postseason game.

Stephen Gostkowski, who set the franchise scoring record when he kicked the extra point following New England's touchdown on the first possession of the game, also kicked two field goals.

"At the end of the day it comes down to execution and they executed a little better than we did," said KC punt returner Frankie Hammond Jr.

Brady threw 11 straight passes on an 80-yard drive down the field on the opening drive and the Patriots never trailed. New England is 63-0 since 2001 when leading a home game by at least 15 points.

Wide receiver Jeremy Maclin, who didn't practice all week because of an ankle injury, was able to play but was not at 100 percent. Neither and neither were linebackers Justin Houston and Hali.

NOTES: New England LBs Jamie Collins (back) and Gerod Mayo (shoulder) left the game in the third quarter because of injuries. ... Amid speculation that he might sit out for a series or two as punishment for last week's off-field incident that sent him to the hospital for a reaction to synthetic marijuana, Patriots defensive end Chandler Jones started. He forced a fumble. ... The Chiefs didn't allow more than 22 points in any game and yielded 11.6 per game during their winning streak, also forcing at least one turnover in each game. They were unable to turn the Patriots' over. ... The Patriots ran the ball only once in the first quarter, the fourth time this season they ran one or zero times in an opening quarter. ... This was the first playoff meeting between the two original AFL teams. ... WR Keshawn Martin, who caught a 42-yard pass from Tom Brady on New England's second scoring drive, signed a two-year contract extension worth a reported $3 million. ... QB Tom Brady tied kicker Adam Vinatieri's NFL record of 30 postseason games. 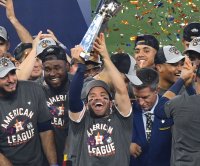 NFL // 18 hours ago
Giants' Saquon Barkley, Kadarius Toney, Kenny Golladay out vs. Panthers
Oct. 22 (UPI) -- The injury-plagued New York Giants will be without at least three key offensive players in Sunday's game against the Carolina Panthers at MetLife Stadium.