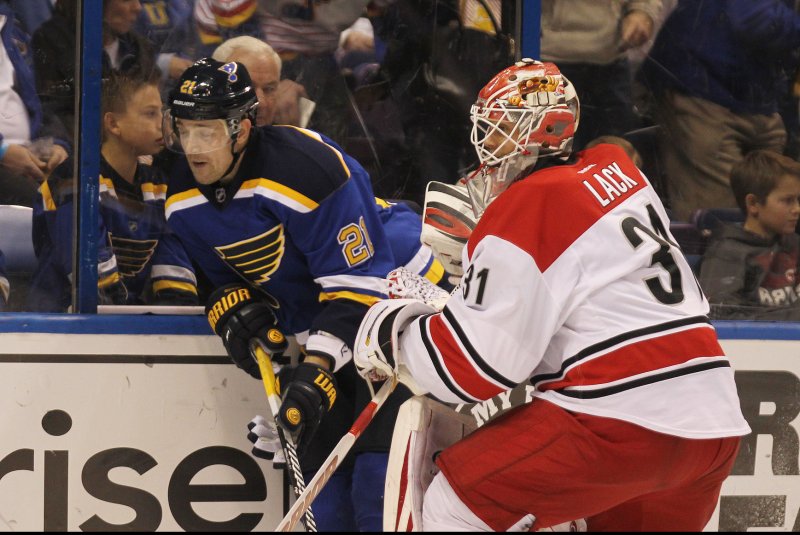 St. Louis Blues Paul Stastny wears a cage on his helmet to protect the gash on his face in the second period against the Carolina Hurricanes at the Scottrade Center in St. Louis on January 14, 2016. Photo by Bill Greenblatt/UPI | License Photo

ST. LOUIS -- There's something about playing against the St. Louis Blues that seems to bring out the best in goalie Eddie Lack.

Lack raised his career record against the Blues to 6-0 and the backup goalie for the Carolina Hurricanes just missed his first shutout of the season in a 4-1 win Thursday night over the Blues.

Lack stopped 23 of 24 St. Louis shots, allowing only a third-period goal from center Jori Lehtera off a rebound, as he helped the Hurricanes extend their winning streak to a season-high four games.

It also was the Hurricanes' first win in St. Louis since Dec. 11, 2010 but beating the Blues was not new for Lack, who won three games against them in 2013-14 and two last season when he was with the Vancouver Canucks.

RELATED Patriots DE Chandler Jones: 'I made a stupid mistake'

Lack said he really couldn't offer a reason for his success against the Blues.

"My team's have been playing extremely well against them," Lack said. "It's been a lot of close games and I've been fortunate to be on the right side of the score. Yeah, it's tough to explain."

Lack had to make only 11 saves through the first two periods, a challenge for a goalie to stay sharp when facing so few shots.

"I'm not going to lie," Lack said. "It's tough sometimes to just stand there waiting for it. ... I was trying to stay warm."

"He was solid," said Peters. "I thought he was real good. (Right winger Vladimir) Tarasenko was dangerous in the first on a real good release on a play on the left side. Eddie was big and square and I thought he looked very comfortable in net."

Left winger Jeff Skinner led the way for the Carolina offense with a goal and an assist. He started the scoring with his team-leading 17th goal of the year 1:49 into the second period and assisted on a third-period goal from right winger Brock McGinn.

That goal made it a 3-0 lead for the Hurricanes, who also got a power-play goal from defenseman Brett Pesce, and chased goalie Brian Elliott from the game.

Elliott was replaced by Jordan Bennington, making his NHL debut after he was recalled from Chicago of the AHL last week when goalie Jake Allen was injured. Bennington allowed the final Carolina goal on a breakaway by right winger Riley Nash.

The loss frustrated the Blues, who trailed just 1-0 going into the third period despite having only 11 shots on goal and going 0-for-3 on the power-play. They also failed to capitalize on a power play in the final period.

Coach Ken Hitchcock said he could tell very early in the game it was going to be a difficult night for the Blues, who have been dealing with a heavy schedule of games and a multitude of injuries to key players.

"We don't have any energy, we running on fumes right now," Hitchcock said. "You could see it five minutes into the game. We've got to find some energy. There's no point in beating it down. Not taking anything away from Carolina but we had nothing from start to finish.

"It's one of those games that we kind of thought it was going to come maybe even sooner but we battled through it. You just can't continue to play without all of the bodies and expect not to have some of these."

The Blues might have suffered another injury in the third period when left winger Alexander Steen appeared to be hit in the face by a stick, swung in frustration by defenseman Kevin Shattenkirk after Pesce's goal. Hitchcock said his status would be updated on Friday.

The loss snapped a five-game point streak for the Blues.

NOTES: C Paul Stastny returned to the St. Louis lineup after missing two games because he was hit in the cheek by a deflected puck, causing headaches and "fogginess," according to Stastny. ... Blues RW Ty Rattie, who scored his first NHL goal on Tuesday night, was a healthy scratch. ... Carolina LW Nathan Gerbe and LW Phillip Di Giuseppe were on the trip and are getting closer to getting back in the lineup. Gerbe has missed 25 games because of a lower-body injury and Di Giuseppe has been sidelined for six games with a concussion. ... The game in St. Louis was the annual dad's trip for the Hurricanes, with 19 fathers of players and staff accompanying the team. ... Carolina hosts Vancouver on Friday night and St. Louis hosts Montreal on Saturday night.