Legendary sportscaster Jim Simpson, whose career included the radio call of the first Super Bowl, has died after a short illness. He was 88.

Simpson died Wednesday morning in Scottsdale, Ariz., his family said. Simpson was watching Sunday's Washington Redskins-Green Bay Packers playoff game before being admitted to the hospital over the weekend.

Simpson called six Super Bowls, serving as an NFL play-by-play voice for 15 years. He called the Major League Baseball All-Star game 16 times, the World Series six times and the Olympics 14 times. He worked all four major championships in both golf and tennis.

Simpson was best known for his work on AFL games for NBC when he was hired by ESPN when the network launched in 1979. He worked 15 years with NBC Sports from 1964-1979. He also worked for ABC, CBS and TNT.

On Friday, NFL Network will re-air Super Bowl I -- 49 years to the day after the Green Bay Packers and Kansas City Chiefs met -- in the first-ever replay of the historic game in a full recreation on television. Simpson's NBC Radio call will provide the play-by-play.

Simpson was inducted into the National Sportscasters and Sportswriters Hall of Fame on May 1, 2000. 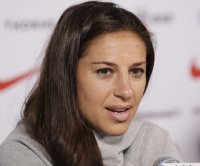 MLB // 13 hours ago
Braves' Charlie Morton fractures fibula in Game 1, out for rest of World Series
Oct. 26 (UPI) -- Atlanta Braves starting pitcher Charlie Morton will be out for the remainder of the World Series after suffering a fractured right fibula early in Game 1 on Tuesday night at Minute Maid Park in Houston.

NFL // 15 hours ago
Steelers' Mike Tomlin halts USC, LSU coaching rumors: 'That's a joke to me'
Oct. 26 (UPI) -- Pittsburgh Steelers head coach Mike Tomlin on Tuesday shut down speculation that he could be in the running to fill head-coaching vacancies at USC or LSU.