By
Chandler Rome, The Sports Xchange 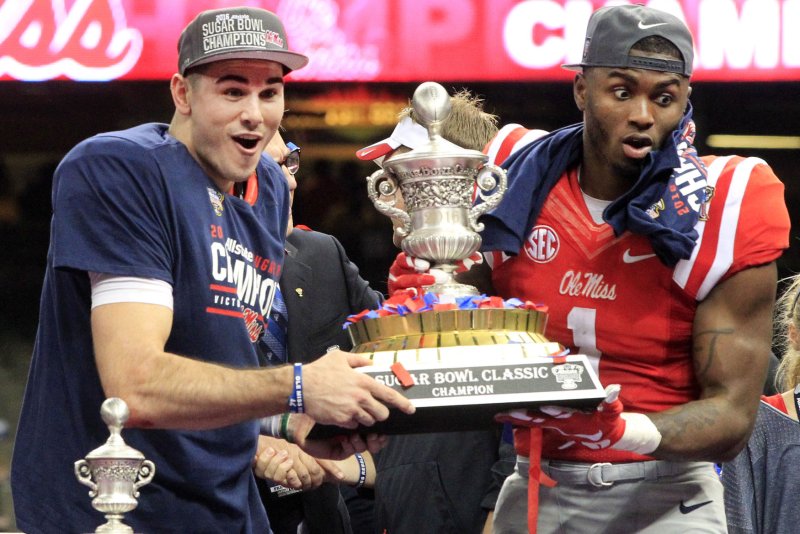 Mississippi Rebels quarterback Chad Kelly (10) runs with the ball towards the end zone as Oklahoma State Cowboys cornerback Miketavius Jones (24) tackles him in the second quarter of the Allstate Sugar Bowl at the Mercedes-Benz Superdome in New Orleans, Louisiana, on January 1, 2016. Photo by Veronica Dominach/UPI | License Photo

NEW ORLEANS, La. -- It had been so long for Ole Miss: 46 years since the Rebels played in the Southeast's most recognizable bowl game. Archie Manning started that Sugar Bowl game in 1970 -- a 27-22 win against Arkansas.

On the sideline for his alma mater's return, Manning saw quarterback Chad Kelly throw three of his four touchdown passes to wide receiver Laquon Treadwell and No. 12 Mississippi rolled to a 48-20 victory over No. 16 Oklahoma State on Friday night in its first Sugar Bowl appearance since 1970.

"It was a bucket list item for me," said Rebels coach Hugh Freeze, a native Mississippian. "I don't know that it's totally sunk in yet. I seem to cry more the older I get. I know I'm going to reflect on this tomorrow and probably have some emotions. I'll probably cry a little bit with my wife and kids. (I was) raised in this state and know what the Sugar Bowl means to the SEC."

Treadwell also completed a 45-yard pass on a trick play to continue a scoring drive and left tackle Laremy Tunsil scored a 2-yard touchdown at the end of the first half.

"I think we just executed, played with high intensity and pieces fell our way," said Treadwell, who was serenaded with chants of 'one more year' after the game. "It was amazing. Rebel Nation is always supporting us through tough times. To be injured a year ago and then come back to that chant, it was all a blessing."

Ole Miss set a school bowl record with 554 yards of offense and its defense was also dominant with 10 pass breakups and 12 tackles for loss.

The Rebels' record-shattering first half began nastily. On Kelly's second pass of the game, he heaved an ill-advised deep ball into double coverage that Oklahoma State cornerback Ashton Lampkin intercepted.

Then, with as much ease, Kelly threw three touchdowns -- two to Treadwell -- to help Ole Miss build a 34-6 halftime lead and tie a Sugar Bowl record for most points in the first half.

"You can't worry about the last play," said Kelly, who was named the game's most outstanding player. "Each play has its own life. We saw a look we liked and we took a chance. Might have gotten caught up or held or whatever, but we knew we had to keep taking our shots and not back down. That's what we did. We didn't back down and we kept fighting."

Kelly's second touchdown -- a fade to Treadwell that was caught despite pass interference -- gave him the school season record for receiving yards previously held by Shay Hodge.

Complemented by a defense that held Oklahoma State to 156 first-half yards, Kelly connected with six different receivers throughout the first half.

Cowboys quarterback Mason Rudolph, who had foot surgery last month that left a sliver of doubt over who would start the game, played all but one snap in the first half. It was a crucial one to miss.

Facing third-and-1 on the Ole Miss 8-yard line in a scoreless game, Rudolph was lifted for senior J.W. Walsh, who was stuffed on a sneak that forced Oklahoma State to take a field goal instead of driving in for an opening touchdown. The Rebels scored touchdowns on three of their next four drives.

"I hate to take away from them, but when you get in the game and you get behind by too far and become one-dimensional, for us anyway, it made it difficult," said Oklahoma State coach Mike Gundy. "It became kind of a runaway train for us."

NOTES: Ole Miss was without All-American DT Robert Nkemdiche, who was suspended for the Sugar Bowl after he was charged with marijuana possession in an Atlanta hotel. Nkemdiche, a junior, declared for the NFL draft in a statement released by the school at the time of his suspension. ... Ole Miss was 2-0 against Oklahoma State in recent bowl games, winning the 2004 and 2010 Cotton Bowls. ... Rebels WR Damore'ea Stringfellow was ruled out for the game at the start of the second quarter with a right ankle injury. ... The loss was Oklahoma State's first in its last eight games away from home. ... QB J.W. Walsh has now scored a touchdown in each of Oklahoma State's 13 games.

NFL // 10 minutes ago
Marshawn Lynch to have 'substantial' role in HBO's 'Westworld'
Feb. 21 (UPI) -- NFL running back Marshawn Lynch will appear in the new season of HBO's "Westworld."