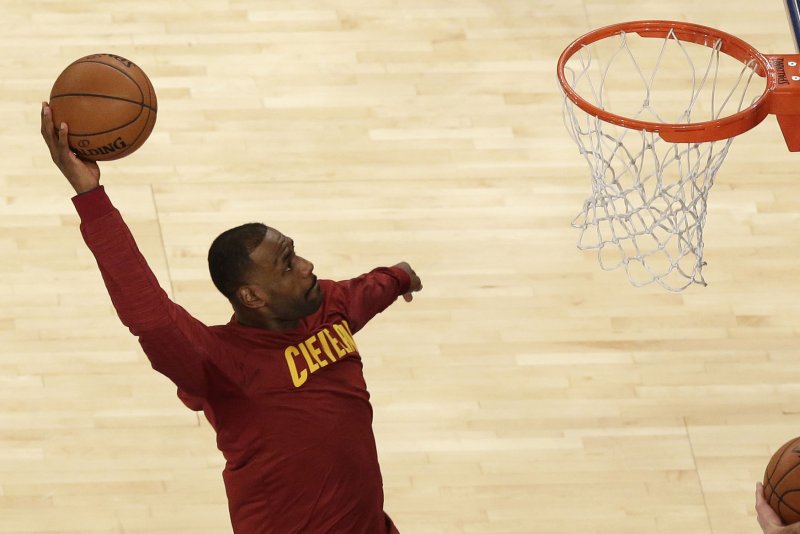 CLEVELAND -- LeBron James isn't one to compare the game's all-time greats. Yet with every basket and every new milestone, James is climbing into the rare air of NBA legends.

James joined Oscar Robertson as the only players in NBA history to rank in the top 25 in both scoring and assists, and Kevin Love scored a season-high 34 points as the Cleveland Cavaliers beat the Orlando Magic 117-103 Monday night.

James' assist on Love's 3-pointer with five minutes left in the second quarter gave him 6,387, moving him ahead of Norm Nixon and into 25th place. James is 19th on the all-time scoring list and should pass Reggie Miller for 18th place Wednesday night at Toronto.

"That gives me chills to even hear that," Cavs coach David Blatt said. "That's an amazing, amazing accomplishment.

"You're speaking about such rarified air. ... All the credit and respect to him for that."

James has already reached a number of milestones this season, including being the

youngest to score 25,000 points. His latest achievement illustrates his brilliance as both a scorer and a facilitator.

"Every time there's a young great player everybody talks about Michael (Jordan), but to me he's always been more like a Magic (Johnson) or an Oscar type player because of his vision," Magic coach Scott Skiles said. "That's what makes him so difficult. If you think you're going to give him a steady diet of running and double teaming him, he's going to carve you up."

And yet it's that comparison Skiles made that James doesn't like. James believes people spend too much time trying to compare greatness rather than just enjoying it.

"I think we get caught up in, in our league too much is trying to compare greats to greats instead of just accepting and acknowledging and saying, 'Wow, these are just great players,'" James said. "In the NFL when you talk about great quarterbacks, you don't really compare great quarterbacks -- Joe Montana is great, Tom Brady is great. Aaron Rodgers is great. Steve Young is great. All those great quarterbacks, they don't compare them as much, but when it comes to our sport we're so eager to say who is better Oscar or Jordan or LeBron or Kobe or these guys instead of just accepting greatness. If you understand the history of the sport then there is no way you can ever forget Oscar Robertson. He averaged a triple-double for like, forever."

and no turnovers, and guard J.R. Smith scored a season-high 26 points. He made

Vucevic had 12 points and five rebounds for the Magic, which rallied from an

Love scored 17 straight for the Cavs during a five-minute stretch in the second quarter that included three 3-pointers. He set a season high for points by halftime as the Cavs remained unbeaten at home (8-0).

"Just found a good rhythm. My shot has felt great, but it just hasn't quite dropped like it has tonight, at least from the perimeter," Love said. "We've done a really good job the last few games, every single one of us, of going from a good shot to great. You saw that a lot tonight on the perimeter."

James singled out one of those moments when he had a clear path for a layup, but instead zipped a pass to an open Love for a 3-pointer.

Magic, whose starters were outscored 99-44 by the Cavs.

"It was kind of men against boys," Skiles said in comparing the two starting units.

The Cavs improved to an Eastern Conference-best 11-3 on the same day James won the player of the week award for the East.

the fourth and eventually increased the lead to 23.

NOTES: The Magic entered the game third in the NBA in defensive field-goal

percentage after ending last season third-worst. But the Magic averages 22.4

fouls per game, which ties them with Oklahoma City for 24th. "We're fouling too

much," coach Scott Skiles said. ... The Magic has lost 11 straight to the Cavs in this series. ... Cavs G Mo Williams missed his second game with an ankle injury and even the third-string point guard, Matthew Dellavedova, is fighting leg injuries. "If Mo and Kyrie (Irving) were playing, Delly would probably sit this one out and the last one, too," coach David Blatt said. The Cavs are hopeful Williams can play Wednesday at Toronto. ... C Timofey Mozgov has been shut down for at least another week with a shoulder injury, but Mozgov's knee has been bothering him all season following a summer scope. "This could be a blessing in disguise," Blatt said of the time off.