By
Don Wade, The Sports Xchange 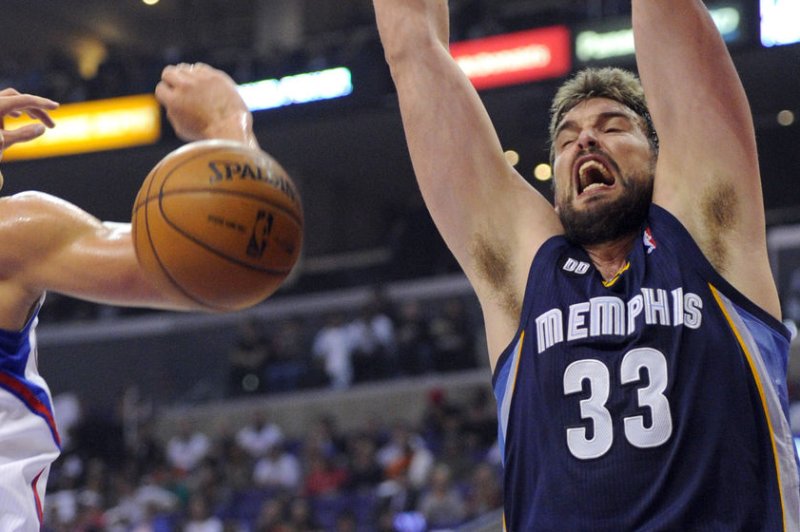 MEMPHIS, Tenn. -- The Memphis Grizzlies were on the verge of making some unpleasant history, about to lose a fifth straight game for the first time since December of 2013. Worse, they were about to blow a 14-point second-half lead, and a lead of 10 points with just 4:03 left in the game.

"We all would have been sick to our stomach," said Memphis center Marc Gasol, who scored a game-high 31 points in the Grizzlies' 101-100 victory oveer the Portland Trail Blazers on Friday night at FedExForum.

Portland didn't get a second-half lead, at 100-99, until forward Al-Farouq Aminu (16 points) hit a 3-pointer with 12.5 seconds to play. And the Grizzlies didn't make the winning basket until power forward Zach Randolph (15 points, 8 rebounds) tipped the ball in with 0.6 seconds left. The tip followed an errant 3-point shot from guard Courtney Lee.

Gasol, of course, was joking about that and also said he did not realize how long it had been since the Grizzlies (4-6) had lost five in a row.

"Good thing that it didn't happen," he said.

Neither team really grabbed control until the Grizzlies broke a 55-55 tie with a 14-0 run to go ahead 69-55 with 6:19 left in the third quarter, the last points coming on a trey from Gasol. Portland trailed 79-70 going into the fourth quarter.

The Blazers (4-6) outscored Memphis 30-22 in the final frame to give themselves an opportunity. Guard CJ McCollum led Portland with 26 points.

"I thought it was a terrific effort," said Portland coach Terry Stotts. "Especially in the fourth quarter. To fight back in a game like that was good to see."

"The more we turn the ball over the less of a chance we give ourselves to win games," said Portland point guard Damian Lillard (11 points, 7 assists).

The Blazers hit 33-of-69 shots from the field for 47.8 percent. Portland had a 43-35 rebounding edge. Lillard also was encouraged by the fact they played their best in the fourth quarter.

"We actually put something together," he said. "We got a lot of stops and picked it up on the defensive end."

Gasol carried Memphis most of the game. He was 11-for-18 from the floor and also chipped in five assists with four rebounds. Friday night also marked the debut of backup point guard Mario Chalmers, who was acquired from the Miami Heat earlier in the week. Chalmers scored 11 points and finished with two assists and four steals.

When Chalmers was with Kansas, he made a game-tying 3-pointer in the 2008 NCAA title game vs. Memphis. The Tigers blew a late lead and the Jayhawks won in overtime. Chalmers said every other time he had played the Grizzlies in this building he had been booed. But not Friday night. There were only cheers.

"I actually woke up from my nap thinking about it," he said.

His teammates also made him feel welcome: "They were like, 'Go ahead, bring the game to you.'"

The lowest-scoring team in the NBA coming into Friday's game (90.2 points per game), the Grizzlies scored 100 or more points for just the fourth time this season. Forward Jeff Green had 14 points off the bench and starting point guard Mike Conley scored 11 points with nine assists.

"We kind of self-destructed the last couple of minutes with some defensive breakdowns and fouling," said Memphis coach Dave Joerger. "When you're having a little losing streak, it feels good to get a win any which way you get it."

NOTES: Portland C Meyers Leonard was out Friday night because of a left shoulder injury. Coach Terry Stotts did not speculate how long Leonard, who is averaging 8.4 points and 4.4 rebounds, will be sidelined. "He's out until he's no longer out," Stotts said. ... PG Damian Lillard, the team's leading scorer (26.9 points per game), is nursing a sore thumb but started. ... Although backup PG Mario Chalmers was in uniform for the first time Friday after coming to Memphis in a trade that included PG Beno Udrih going to Miami, coach Dave Joerger said Chalmers will get first call behind starter Mike Conley. "It's going to take a little while" to adjust to the team's offense, Joerger said. ... G Jordan Adams (knee) and F Brandan Wright (knee) were out for the Grizzlies. Joerger said the team is starting to get concerned that Wright has something beyond tendinitis.