Oakland Raiders prepare to move on without Justin Tuck 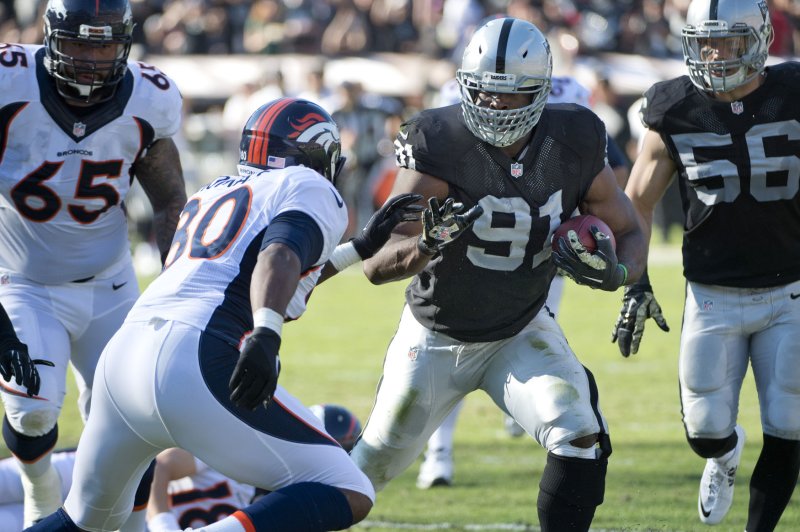 ALAMEDA, Calif. -- The Oakland Raiders departed for their bye weekend with the realization that they were losing defensive end Justin Tuck, one of their most respected veterans and a mentor to young linemen such as Khalil Mack and Mario Edwards Jr.

"It'll be a challenge, not having him out there on the field, not having the leader of the team," Mack said. "Having that type of injury is difficult, but it's one he's been positive about and we've been positive with him, letting him know we still want to see him around, see his face. Having his leadership is really more important than anything."

Edwards, who played a season-high 50 snaps against the Denver Broncos and whose role figures to expand, is ready for more responsibility.

--Tight end Clive Walford, who had a 33-yard reception against Denver, is hoping to see his role expand after the third-round draft pick had his ascent slowed by injuries that started in training camp.

"We did get Clive involved, albeit in a limited capacity," offensive coordinator Bill Musgrave said. "I can't wait for that level to increase in the future."

Walford, whose skills were immediately evident during the offseason program, concedes the waiting was difficult.

"It was tough on me mentally because I wanted to be out there so bad," Walford said. "It bothered me then, but I stayed patient and worked hard for when my time would come."

--Quarterback Derek Carr, who has a 93.9 passer rating through five games and whose yards-per-attempt average is up from 5.5 last year to 7.2 this year, said there was no magic wand responsible for his improvement.

"I'm definitely a lot more comfortable," Carr said. "The game has slowed down. Now I'm just playing football, trying my best to throw it exactly where I want to and all those things. One of my goals was to be more efficient. That's something (quarterbacks) coach Todd Downing has been hard on me about, and we're going to keep trying to improve as we go forward."

NOTES: WR/KR Walter Powell was signed off the practice squad of the Buffalo Bills and is a candidate to assume both kickoff and punt return duties when the Raiders face the Chargers. ... S Keenan Lambert, claimed off waivers by the Raiders earlier in the season, was waived. ... Taiwan Jones is expected to resume his role as special teams gunner and be available as a change-of-pace running back at practice this week. He missed two games due to a foot injury.