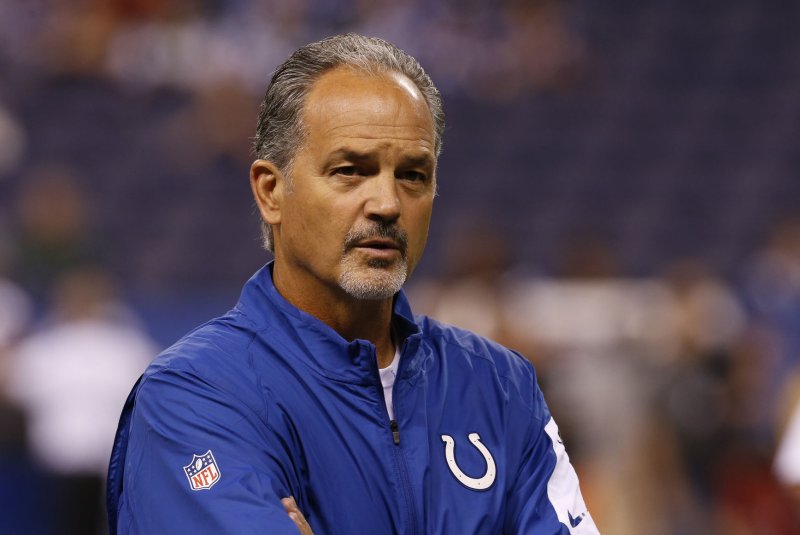 Despite a 34-27 loss to New England Sunday night, the Indianapolis Colts are trying to move on and begin preparations for the New Orleans Saints.

Indianapolis will host the Saints on Sunday at Lucas Oil Stadium.

The Colts made things interesting for a while in the loss to New England, taking a 21-20 lead into the locker room at halftime. But the Patriots were able to pull away over the final two quarters to remain undefeated for the season.

"We cannot have a hangover from this," Indianapolis head coach Chuck Pagano said Monday. "Another really good football team coming in here. Can't dwell on anything."

That includes the botched fake punt play that cost the Colts field position and allowed New England to have a short field late in the third quarter. The miscue eventually led to the Patriots' scoring their final touchdown of the game.

In retrospect, less than 24 hours after the game, Pagano said that he still doesn't regret making the decision to attempt the fake punt. He does, however, regret what transpired during the aborted play, which resulted in a penalty being called on Indianapolis and turning the ball over on downs.

"I don't regret the play call. I take full responsibility from a preparation standpoint," he said. That falls on me. Nobody else."

So what was his thinking on deciding to go for the fake punt?

"The design was to get them with 12 players or burn a timeout. That was the idea. I obviously didn't do a good job of coaching it up," Pagano said. "I still take full responsibility with that play not working. It falls on me and no one else and I need to be better."

With New Orleans coming to town this week, the Colts have to move past all that. Indianapolis will bring a 3-3 record into the game but there's still plenty of work to be done.

The Colts have been hurting themselves this season, especially on offense, with too many drive-killing penalties. It happened again against New England on Sunday night.

"Self-inflicted wounds. Been doing that all year. We thought we had it calmed down. Took care of the football [against the Patriots]. Penalties still an issue," the Colts coach said. "We have to get the penalties corrected. It's hard to overcome."

--PASSING OFFENSE: B. QB Andrew Luck returned to the starting lineup after missing the previous two games nursing a sore right shoulder. Luck wound up completing 30-of-50 passes for 312 yards and three touchdowns for a 98.1 passer rating. He was sacked three times but did not throw an interception. WRs T.Y. Hilton (six catches for 74 yards and a TD) and Donte Moncrief (six receptions for 69 yards and a TD) were Luck's primary targets. WR Griff Whalen also added a late TD catch.

--RUSHING OFFENSE: B-minus. The Colts got off to a strong start on the ground with running back Frank Gore doing most of the early damage. Indianapolis got away from the run, however, in the third and fourth quarters. Gore wound up with a team-high 78 yards in 13 carries, including a 23-yard run. Running back Ahmad Bradshaw saw his first action with the Colts, getting four carries for eight yards. Luck added 35 yards on four scrambles. Indianapolis averaged 5.5 yards per rushing attempt as a team.

--RUN DEFENSE: C-plus. RB LeGarrette Blount, who has been a major thorn in the side of the Colts in recent seasons, was held reasonably in check on Sunday night. Blount had a game-high 93 yards in 16 carries, including a 38-yard touchdown run. As a team, New England had 116 yards on the ground. The Patriots averaged 4.6 yards per carry against the Colts.

--SPECIAL TEAMS: B-minus. There was the good, which included punter Pat McAfee averaging 46.5 yards net and 47.8 yards overall on six punts. He had three kicks downed inside the Patriots 20-yard line. McAfee also had three touchbacks on kickoffs. Wide receiver Griff Whalen had one kickoff for 19 yards and three punt returns for 15 yards. Indianapolis very nearly pulled off a pooch onsides kick but was unable to get the recovery. Wide receiver Donte Moncrief eventually came up with the ball, but the game officials ruled that New England had the initial possession. The Colts asked for a replay review, but lost the review. And then there was the botched fake punt when Whalen inadvertently snapped the ball to safety Colt Anderson. The play was flagged for a penalty as several Colts offensive linemen were not lined up correctly as well.

--COACHING: C-minus. Indianapolis started out the game strong both offensively and defensively. But the Colts got away from their offensive game plan in the second half, at one point throwing 26 straight passes and forgetting the run game entirely. The ill-advised fake punt was not a good decision due to where the ball was on the field (at the Colts' 35-yard line) and how the play was botched. While Indianapolis was more competitive against the Patriots than they had been in other recent meetings, too many mistakes wound up costing the Colts a chance at a win.