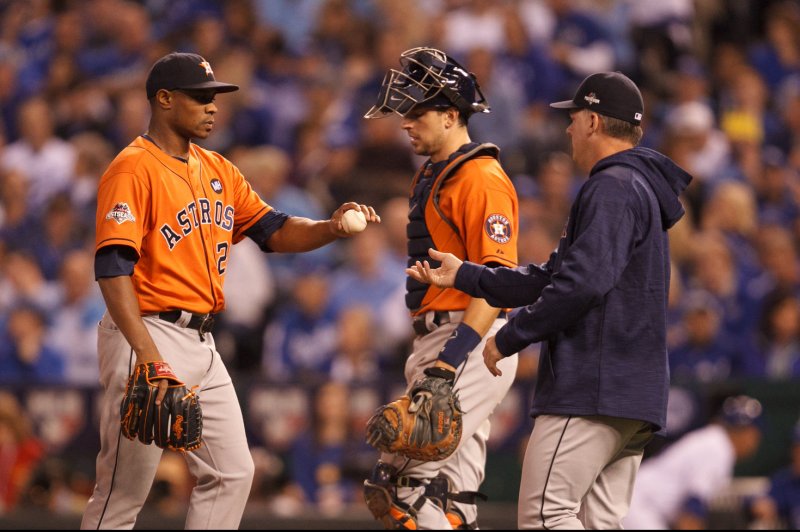 Houston Astros third baseman Luis Valbuena (18) is congratulated by teammates after hitting a two run home run against the Kansas City Royals in the second inning of game 5 of the American League Division Series at Kauffman Stadium in Kansas City, Missouri on October 14, 2015. Photo by Jeff Moffett/UPI | License Photo

HOUSTON -- For several weeks, as the Houston Astros built a sizable lead in the American League West, coughed up that advantage to the Texas Rangers, then rallied to claim their first postseason berth in a decade, first-year manager A.J. Hinch was asked to assess his performance.

In the aftermath of the Astros' AL Division Series loss to the Kansas City Royals, Hinch was presented the same question but the results spoke loud and clear.

The Astros exceeded all expectations this season, improving by 16 victories from 2014 and further distancing themselves from the three consecutive 100-loss campaigns that defined their protracted rebuild.

Upon his arrival following the 2011 season, Astros general manager Jeff Luhnow spoke of building a sustainable winner. Now, after pushing the defending AL champions to the brink of elimination with a roster flush with young talent, the Astros appear to be on the doorstep of winning next season and for many years to come.

"Obviously, coming off a 19-game improvement (from 2013 to 2014), we felt we had another large improvement inside of us, and we accomplished it during the season, and it was enough to get us to the postseason," Luhnow said. "Right now, my feeling is that's made us all the hungrier to advance even further next year, so expectations will be higher clearly based on what we accomplished.

Following the promotion of Correa, the front office deftly shaped the roster around that quartet, and while offseason tweaks are undoubtedly ahead, the Astros have a foundation in place on which to build.

Improvement should come from full seasons from Correa and right-hander Lance McCullers, another rookie standout, as well as from Springer (who has played in just 180 games over the past two seasons) and center fielder Carlos Gomez, saddled down the stretch with a left intercostal strain.

How the Astros aim to flesh out their roster will offer intrigue. They have depth in their rotation but could use a veteran power arm. They need a flamethrower in their bullpen as well, falling victim in the eighth inning of Game 4 of the ALDS to the contact rate expertise of the Royals by virtue of lacking a reliever who could miss bats. By and large Houston pitchers excelled, but the staff could stand specific reinforcements.

The Astros finished second to the Toronto Blue Jays in home runs with 230, but they also led the AL with 1,392 strikeouts. Finding a contact hitter would serve their lineup well, both as a complement to the ample power and as a change of pace to their one-dimensional attack.

There will be some maturation baked into the current roster, but the Astros have their share of holes at the corner infield slots and at designated hitter with regards to on-base percentage.

However, no matter their flaws, the Astros have arrived, and in the minds of many, a year or two early. Before they delve headlong into undergirding their winning roster, the Astros should take some time to reflect on how they got here and take inventory of the accomplishment.

"This team has been through some ups and some downs and has been able to accomplish a lot more than people thought we would," Springer said. "You have to be proud of that."