Georgia Tech football: Paul Johnson's team no longer under the radar in ACC 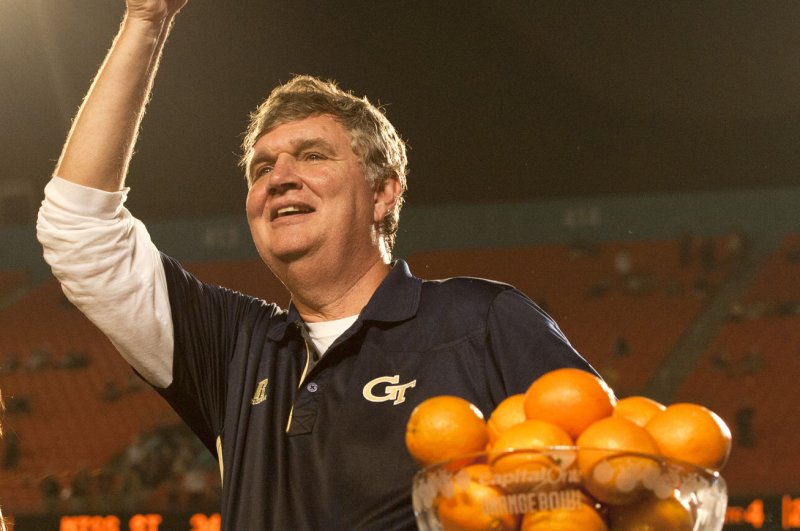 ATLANTA -- Coach Paul Johnson won't be able to play the "us vs. them" card this year. After being overlooked a year ago by the pundits, the Yellow Jackets went 11-3 and finished No. 7 in the nation.

At the annual ACC's preseason football gathering, the Yellow Jackets were picked to win the Coastal Division. Ahead of Virginia Tech. Ahead of Duke. Ahead of Miami. Ahead of everyone.

"There's a lot of teams that are competitive (in the Coastal Division)," Johnson said. "For once I hope they got it right. They haven't got it right too many times. This time I hope they picked in right."

There are many good reasons why the Yellow Jackets are the overwhelming pick to win their division. There are 16 returning starters -- six on offense, eight on defense and both specialists. Johnson has 48 returning lettermen.

Now it makes sense why there's so much high regard for the program this year. The Yellow Jackets enter the season ranked No. 17 in the coaches poll, the first time they've been in the preseason polls since 2010.

"I think you've got to play the games on the field," Johnson said. "We've been in the ACC Championship game three of the seven years we've been there. That's certainly our goal and what we're shooting for again this year."

The source for much of the excitement stems from the presence of junior quarterback Justin Thomas, who last year proved to be the ideal man to run Johnson's spread option attack. Thomas ran for 1,086 yards and threw for 1,719 yards and accounted for 26 touchdowns, with a 153.9 pass efficiency rating.

With Thomas at the controls the Yellow Jackets led the nation in rushing and set an ACC record, averaging .342.1 yards per game.

"Justin is a tremendous athlete," Johnson said. "We're very fortunate to have him as part of our program. I think he'd be a really good quarterback in any system, but his skill set really fits what we like to do."

The defense, now in its third season under coordinator Ted Roof, may be in the best place it has ever been since Johnson arrived. Eight starters return from a group that seemed to bend, but resisted the urge to break. Other than a meltdown at Chapel Hill, the defense was effective.

Returning starters are led by nose tackle Adam Gotsis, a 6-5, 282-pound senior who could play at the next level. Other returners on the defense are end KeShun Freeman, a freshman All-America last year, linebackers P.J. Davis and Tyler Macordes, cornerbacks D.J. White and Demond Smith and safeties Jamal Golden and Chris Milton.

Both specialists are back. Ryan Rodwell averaged 41.2 yards last year. Kicker Harrison Butker wasn't as good as he was as a freshman, but still made 11 of 18 field goals, including the 53-yarder against Georgia that sent the game to overtime.

SPOTLIGHT ON SEPTEMBER: The schedule starts slower this year, with home games against Alcorn State and Tulane. But there are two road games at the end of the month (Notre Dame, Duke) that could determine whether the Yellow Jackets can live up to their hype.

KEYS TO SUCCESS: Most of the team's experienced running backs graduated. The Yellow Jackets are banking on the return of A-back Broderick Snoddy, who ran for 283 yards and three touchdowns before breaking his leg against Clemson. The leader at the B-back slot is Stanford graduate transfer Patrick Skov, who brings a physical style of running to the position. True freshman Marcus Marshall will also play there.

AREAS OF CONCERN: The two top receivers, DeAndre Smelter and Darren Waller, both graduated and were in an NFL camp this fall. Thomas will need Micheal Summers and Ricky Jeune to prove they can catch during a game; Summers had seven catches a year ago, while Jeune did not have a reception. Both have been outstanding in preseason camp.

QUOTE TO NOTE: "Justin (Thomas, QB) is a tremendous athlete. We're very fortunate to have him as part of our program. I think he'd be a really good quarterback in any system, but his skill set really fits what we like to do." -- Coach Paul Johnson.