Sam Bradford made his debut for the Philadelphia Eagles on Saturday night, leading a scoring drive in his only series against the Baltimore Ravens in a 40-17 preseason victory.

Bradford completed 3 of 5 passes for 35 yards during the 84-yard touchdown drive. It was his first game since since he tore an ACL last August while playing for the St. Louis Rams.

Running back DeMarco Murray had a 2-yard touchdown run and Ryan Mathews scored on a 14-yard run. Kenjon Barber added a 68-yard punt return for a TD.

Ravens quarterback Joe Flacco threw interceptions on his first two drives and was 3 of 7 for 23 yards in three series.

Eagles reserve quarterback Tim Tebow came on in the fourth quarter and went 2 of 5 for 13 yards and ran for 31 yards.

Damien Williams scored two touchdowns and Ryan Tannehill completed 12 of 15 passes for 102 yards and a touchdown in Miami's loss to Carolina in Charlotte, N.C.

Cam Newton was 4-of-10 passing for 42 yards and an interception for the Panthers. Joe Webb led three second-half touchdown drives for Carolina.

Jimmy Clausen led two second-half touchdown drives in Chicago's victory in Indianapolis after Jay Cutler directed the Bears to three field goals in the first half.

Clausen was 6 of 9 for 54 yards with one touchdown and one interception and Cutler finished 8 of 9 for 69 yards.

Wide receiver Phillip Dorsett, the Colts' first-round draft pick, injured his right knee in the third quarter and did not return to the game.

Andrew Luck completed 5 of 9 for 71 yards and ran 5 yards for a touchdown.

New England rallied past New Orleans on the road behind Jimmy Garoppolo.

Garoppolo finished 28 of 33 for 269 yards and an interception.

Brandon Cooks had four receptions for 117 yards for the Saints, including a 45-yard touchdown pass from Drew Brees.

Brees connected on 8 of 10 passes for 159 yards and two touchdowns.

Peyton Manning made his preseason debut and Denver rallied to win in Houston.

Manning played four series that ended with punts. He completed 8 of 14 passes for 52 yards.

Brock Osweiler replaced Manning and threw a 57-yard touchdown pass to Andre Caldwell that gave the Broncos a 7-0 lead early in the second quarter, but Osweiler threw an interception in the third quarter that was returned 69 yards by Kourtnei Brown for a touchdown.

The winning score was a 26-yard touchdown catch by Corbin Louks.

Ryan Mallett and Brian Hoyer, battling for the starting quarterback job with the Texans, failed to lead a scoring drive.

Eli Manning struggled for the Giants, completing just 4 of 14 passes for 46 yards in three series. Nassib finished 19 of 35 for 217 yards and an 8-yard touchdown pass to Dwayne Harris.

Blake Bortles led Jacksonville to three field goals in his only series, connecting on 8 of 16 passes for 98 yards.

Teddy Bridgewater completed 10 of 14 passes for 89 yards and a touchdown in three series and Charles Johnson and Chase Ford each had a touchdown reception for Minnesota in a weather-delayed win over Oakland in Minneapolis.

In three preseason games, Bridgewater is 22 of 28 for 219 yards and no turnovers.

Oakland's Derek Carr was 4 of 8 for 78 yards, including a 40-yard completion to rookie Amari Cooper. 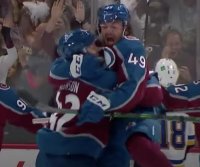 NHL // 2 hours ago
Josh Manson nets overtime winner, leads Avalanche over Blues in Game 1
May 18 (UPI) -- Defenseman Josh Manson flipped in a long-range wrist shot 8:02 into overtime to lead the Colorado Avalanche to a narrow win over the St. Louis Blues in Game 1 of a Western Conference semifinals series.

Sports News // 6 hours ago
PGA Championship 2022: Rahm, Scheffler favorites for golf's second major
May 18 (UPI) -- Jon Rahm and Scottie Scheffler are co-favorites to win the 2022 PGA Championship, the second major tournament of the PGA Tour season, which runs from Thursday through Sunday in Tulsa, Okla.

NBA // 9 hours ago
Heat 'inspired' by Jimmy Butler's 41 points in Game 1 win vs. Celtics
MIAMI, May 17 (UPI) -- Jimmy Butler poured in 41 points and the Miami Heat offense launched an explosive third-quarter comeback to beat the Boston Celtics 118-107 in Game 1 of the Eastern Conference finals on Tuesday at FTX Arena.