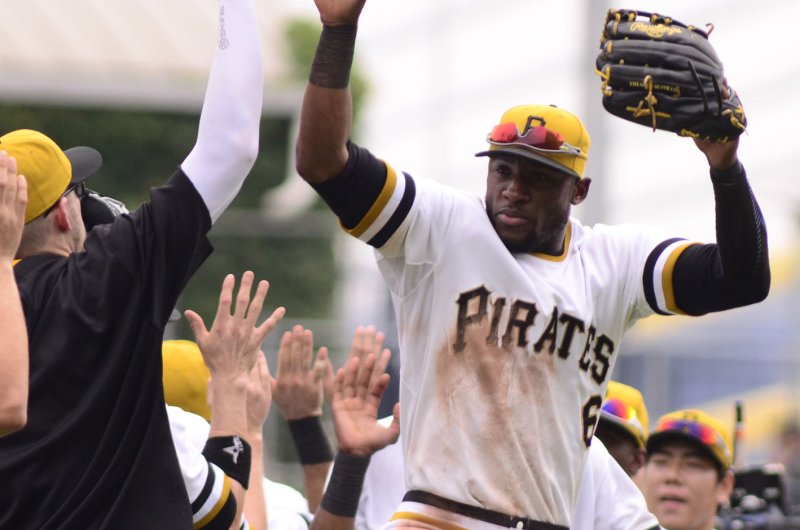 "Does he get credited with the save?," Hurdle said.

Marte made two huge defensive plays in the ninth inning to bail out Melancon and help preserve the Pirates' thrilling 5-4 win over the Cincinnati Reds on Friday.

Melancon extended his saves streak to 31. It all was made possible by Marte who twice prevented the tying run from scoring in the ninth.

"He's playing left field like he invented it," said Hurdle.

In the ninth, second baseman Brandon Phillips singled and was sacrificed into scoring position. First baseman Joey Votto walked with one out.

"Melancon had to go to the four-corners offense," said Hurdle. "He slowed things down and was able to get outs."

Third baseman Todd Frazier singled, but Phillips was thrown out at home on a perfect strike from Marte to prevent the tying run. The play was upheld after Cincinnati asked for a review of the collision rule.

Left fielder Marlon Byrd hit a sinking liner to left that Marte snared on a dive for the final out, handing Melancon his 33rd save.

"I saw the line drive was (hit) a little soft," Marte said. "I just focused and tried to make a play."

Pittsburgh (60-42) won for the first time this season at Great American Ball Park and boosted their season record to 3-8 against the Reds.

"In this case, we didn't beat ourselves," said Reds manager Bryan Price. "They went out and won the game."

"It was a step in the right direction," said Lorenzen. "You have to trust the process and try not to be too disappointed. I'm getting close."

Right-hander Joakim Soria, acquired from the Detroit Tigers on Thursday, made his Pirates debut in the seventh.

He retired the first two batters easily before allowing two walks and a single to load the bases. But Soria snared catcher Brayan Pena's liner, which seemed destined for center field, to end the inning.

The Pirates grabbed a 4-3 lead in the sixth when Kang, who doubled for the third straight at-bat, scored from third on a wild pitch by right-hander Jumbo Diaz.

The Pirates' lead was 5-3 after Marte's RBI single. But they were denied a sixth run when pinch-hitter Travis Ishikawa was thrown out at home.

Cincinnati cut its deficit to one when Byrd clubbed a 421-foot homer off Jared Hughes. It was Byrd's 18th homer this season.

The Pirates scored first when Kang doubled home right fielder Gregory Polanco, putting them ahead 1-0 in the opening inning.

The Reds sent nine batters to the plate against Locke in the second.

De Jesus launched the first pitch he saw from Locke into the left-field seats for a two-run homer, putting Cincinnati ahead 2-1. The Reds scored their third run on a fielder's choice grounder.

The Pirates got a run back when Kang doubled for a second time and scored on first baseman Pedro Alvarez's single to center in the fourth, making the score 3-2.

Pittsburgh tied it 3-3 in the fifth when McCutchen hit his 15th home run of the season.

As for dinner from Melancon.

NOTES: After allowing seven earned runs in 4 1/3 innings in Thursday's 15-5 loss at Cincinnati, Pirates RHP A.J. Burnett was placed on the 15-day disabled list with right elbow inflammation. ... RHP Bobby LaFromboise was recalled from Triple-A Indianapolis to fill Burnett's spot on the roster. ... RHP Joakim Soria, acquired from the Detroit Tigers in a trade Thursday, joined the Pirates on Friday. RHP Deolis Guerra was designated for assignment to make room for Soria. ... Reds RF Jay Bruce was not in the lineup Friday leading to speculation that he was being traded prior to the 4 p.m. ET non-waiver deadline. But it was a scheduled day off. ... In a pair of moves made prior to the deadline, Pittsburgh acquired LHP J.A. Happ from the Seattle Mariners for minor league RHP Adrian Sampson and INF/OF Michael Morse from the Los Angeles Dodgers for OF Jose Tabata.