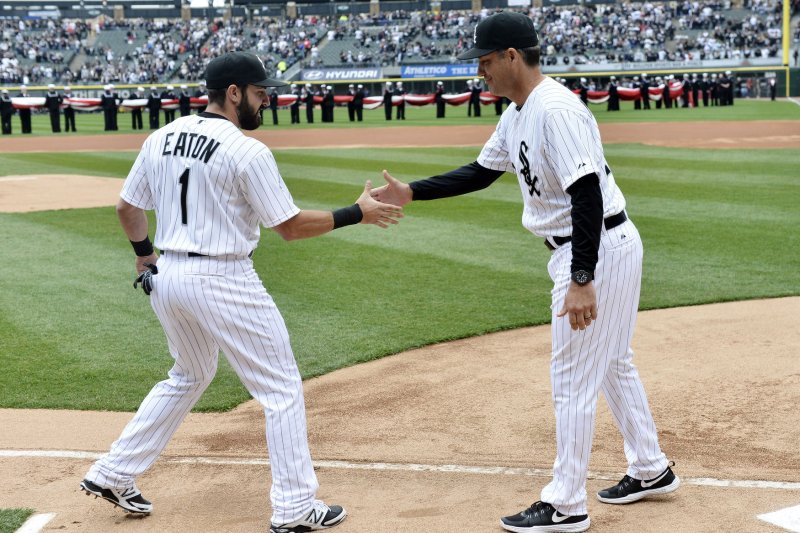 BOSTON -- Adam Eaton didn't wait long to make an impact upon his return to the lineup.

After missing Sunday's game with a shoulder injury, the outfielder tripled in the game's first at-bat to spark a four-run first inning that propelled the Chicago White Sox to a 10-8 victory over the Boston Red Sox in the opener of a four-game series Monday night at Fenway Park.

"Whenever you can start the game quick and fast, it's an advantage," said Eaton, who went 3-for-6 with two RBIs as the designated hitter. "I'll always try to do that, and it worked out today."

Three-baggers have been relatively common as of late for Eaton, who also drove in the tying run with his sixth-inning double and singled in the go-ahead run an inning later.

Eaton's latest triple was his 18th since the start of 2014, tied for the most in the majors.

"I don't hit the ball the farthest, so when it hits a gap or something you've got to have three right in your mind," Eaton said. "If it's going to take a clean play to get you out, take the risk and do it. It is difficult to have those clean relays."

What's his secret? Well, it's not rocket science.

Eaton was one of six batters with multi-hit games as the White Sox pounded out 15 hits. Six different batters drove in runs for Chicago (47-50), which won its fifth straight.

"Obviously frustrated with the results, but I feel good about how I threw the ball," Danks said. "It wasn't much different than my last couple. I just didn't strike out, put the ball in play and found holes. Gave up a couple hard hit balls, but just one of those nights."

Former Red Sox left-hander Matt Albers (1-0) picked up the victory in relief and right-hander David Robertson converted his 22nd save of the season.

Red Sox right-hander Joe Kelly coughed up three consecutive extra-base hits to open the game -- back-to-back triples and a double -- and made a costly fielding error as Chicago jumped ahead 4-0 after a half-inning. Kelly allowed five runs on seven hits in 3 1/3 innings for the Red Sox.

"He had a rough outing," Red Sox manager John Farrell said. "A lot of elevated pitches in the strike zone. They were strikes but the command within the strike zone was lacking. A lot of hard contact early."

A first-inning two-run homer from designated hitter David Ortiz (1-for-5, 2 RBIs) cut the deficit in half, and the Red Sox tied it with two in the second.

First baseman Jose Abreu (2-for-3, RBI) put the White Sox up with an RBI single in the third, but Red Sox center fielder Mookie Betts (3-for-5, 2 RBIs) and third baseman Hanley Ramirez (0-for-5, RBI) each drove in a run in the fourth to give Boston its first lead at 6-5.

Chicago pulled even on a passed ball with the bases loaded in the fifth, but the lead was short-lived as third baseman Tyler Saladino's two-out throwing error put Boston up 7-6 after five.

Chicago pulled even on a passed ball with the bases loaded in the fifth, but the lead was short-lived as third baseman Tyler Saladino's two-out throwing error put Boston up 7-6 after five.

Red Sox first baseman Mike Napoli (0-for-1) was ejected after he struck out looking to end the first and tossed his helmet, which bounced and hit plate umpire Toby Basner in the leg.

NOTES: Boston traded fan favorite OF Shane Victorino, who hit a memorable grand slam during the team's run to a World Series championship in 2013, and cash considerations to the Los Angeles Angels in exchange for INF Josh Rutledge. "I hope I'll be remember for what happened in '13," Victorino said. ... OF Rusney Castillo was called up from Triple-A Pawtucket to fill out the Red Sox's roster and went 1-for-2. ... Boston INF/OF Brock Holt (knee) did not play after hyperextending his left knee Sunday. He is expected back in the lineup Tuesday. ... White Sox LHP John Danks had a scoreless streak of 13 innings before allowing a first-inning homer Monday. ... Chicago's starters had not walked a batter in five consecutive games coming in, tied for the longest streak in club history. The streak ended in the second inning.